Nobody is sure how much the DoD will decrease spending on unmanned systems, but the fear of such cuts has spurred developers to accelerate the transition to civilian applications. 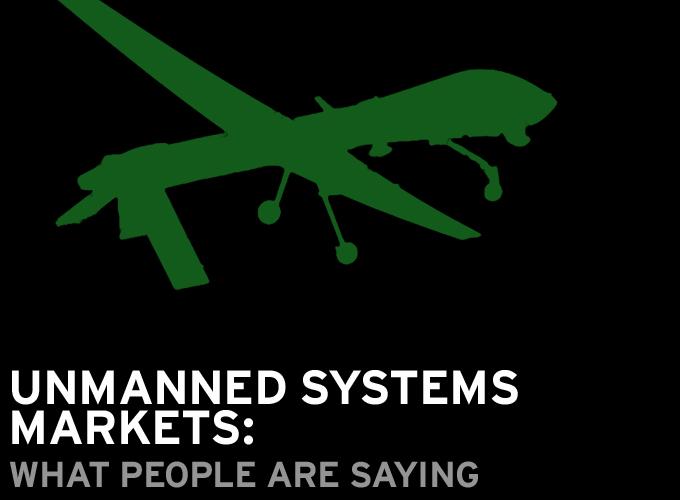 Like many of you, I receive numerous ads for market research studies. In order to excite our interest, they often contain a few snippets of facts. I decided to combine all these “snippets” with the goal of forming a coherent vision of the future of unmanned markets.

You can’t get there from here

In addition to examining market research reports, I contacted a few thought leaders within the profession. I also posted questions about unmanned markets in the social networks of LinkedIn and Quora.

For such a hot topic, I received surprisingly few responses. Typical was Greg Moeller’s response. Greg, an entrepreneur and Managing Director of GGK LLC, posted this comment:

“Bill, there are no really good free sources for the information you seek. Frankly, even paid sources are questionable because what many of us think about as the primary ‘market’ right now is a single customer - the U.S. DoD. Because the DoD is a market with a highly concentrated customer base and a very fragmented supplier base (at least for unmanned systems), markets in the traditional business sense have yet to solidify. In fact, my opinion is that ‘unmanned systems’ is a technology and not a market.

Anyway, great question! Probably not the answer you're looking for, but this is a topic I have spent a good deal of time thinking about.“

So if you are not sure what the future will bring for unmanned systems, you are not alone.

Which unmanned system are we talking about?

The unmanned system market is not really one market, but many. In “marketing talk,” we call this “segmentation.” Unmanned systems are segmented primarily by air, land, and sea, i.e. UAV, UGV, ROV/UUV/AUV/SUV.

The next major breakdown is size. Tactical UAVs (TUAV) are much more numerous than their larger cousins, such as the Predators. UGVs are divided into large, medium, and small. Water-based unmanned systems have a wide variety of names, none of which have to do with size, but more to do with autonomy and whether or not they operate below or above the surface.

Applications are the next major division for unmanned systems. Despite the variety of applications, the vast majority of missions for all unmanned systems are Intelligence, Surveillance, and Reconnaissance (ISR). This is true whether it is an underwater system inspecting an oil platform, a UGV looking for survivors in earthquake rubble, or a Predator searching the countryside for a terrorist. There are exceptions, such as IED disposal, agricultural, and transport, but currently unmanned systems are basically platforms for sensors.

Of course, there’s a lot of potential for other missions. No one is sure which application will be the “the next big thing.”

Procurement and maintenance for UAVs accounts for most spending on unmanned systems. UAVs are frequently described as the “fastest-growing sector in the aerospace industry.” Most spending on UAVs comes from Defense, and most Defense spending comes from the US.

Some, like the Teal Group predict increases in UAV/unmanned systems spending.

“Teal Group's 2012 market study estimates that UAV spending will almost double over the next decade from current worldwide UAV expenditures of $6.6 billion annually to $11.4 billion, totaling just over $89 billion in the next ten years.

"The UAV market will continue to be strong despite cuts in defense spending," said Philip Finnegan, Teal Group's director of corporate analysis and an author of the study. "UAVs have proved their value in Iraq, Afghanistan and Pakistan and will continue to be a high priority for militaries in the United States and worldwide."

"The Teal Group study predicts that the US will account for 62% of the worldwide RDT&E spending on UAV technology over the next decade, and 55% of the procurement," said Teal Group senior analyst Steve Zaloga, another author of the 574-page study.”

Another research group has this rosy prediction: 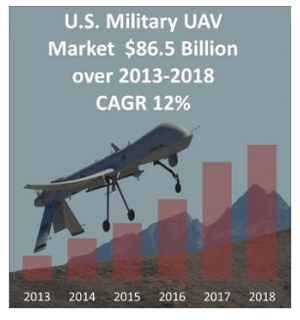 As evidenced by the headline, “US UAV Spending to Drop by Half Over Ten Years,” Market Info Group has a different idea:

Of course, this completely contradicts the Teal Group’s prediction. Other reports state that the American military is done with its initial UAV buying stage and will plateau its spending at $3 to $4 billion per year.

What is most striking to me about the above graph is that the acquisition of small as well as larger UAVs will decline. Large Predator-type UAVs are expensive, crash a lot, demand high maintenance ($5 to 20,000 per flight hour vs. $1to 3,000 per hour for manned aircraft), and have not proven themselves effective for lawenforcement/security. Small TUAVS are relatively inexpensive, mission flexible, and do not elicit the same privacy and collision fears that the larger models do. When police, security, and border patrol go shopping for UAVs, it is TUAVs that they look for.

The US and Israel are the main manufacturers of UAVs, while Asia is the fastest-growing market in the world. Overall spending on UAVs in Asia is expected to reach around $700 million by 2016.

Whatever really will happen with Defense spending for UAVs, many within the industry are preparing for a decrease in the military budget by seeking to develop civilian applications. At AUVSI North America, there was a lot of talk about the next transition stage.

As I stated above, I concur with Market Info Group’s assessment that smaller UAVs (TUAVs) will be more in demand than their larger cousins:

“Over the coming nine years, Unmanned Aerial Vehicles (UAVs) for Border Security will be the most favorable (civil) sales environment for small manufacturers, as well as for small UAV product lines from major manufacturers. Procurement over that period will exceed $3.5 Billion.”

Other targeted applications include:

Unmanned systems in, under, and on the water

In spite of the obvious applications for underwater inspection of oil pipelines and other infrastructures, security & patrols, and science/research, water appears to be a comparatively minor venue compared to air.

Visiongain reports that “energy” is a primary market sector for water-based unmanned systems:

“The energy sector has used unmanned underwater vehicles for around 40 years. Since their first introduction, functions and applications have grown extensively, becoming a vital component of the offshore oil & gas industry. An increase in underwater vehicle manufacturers has boosted competition and technological development, both improving vehicle capabilities and driving down costs. This change in market dynamics has led to a stable, exciting sector capable of significant market growth over the next ten years and more. Visiongain calculates that global expenditure on ROVs and AUVs in the energy sector in 2012 will total $1.52bn.”

Like UAVs, size differentiates different aspects of this market. Large size UGVs can expect to play significant roles in a variety of civilian applications. For example, autonomous cars are predicted to explode in the next few years. Many technologies used in conventional UGVs, especially large ones, will find their way into autonomous cars.

Like all unmanned systems, large UGVs benefit from the perception that they are money savers, i.e. personnel eliminators. Unlike every other unmanned systems, which are primarily used for some kind of ISR, the applications of large UGVs will include transport. The potential for warehousing, logistics, harbors, and trucking are enormous.

One roadblock to large UGV development has been erratic and skimpy funding from the Department of Defense (DoD), i.e. the discontinuance of Future Combat Systems. The lack of development money means, according to Researchmoz, that:

“The companies with existing large and midsize unmanned ground vehicles already developed have achieved enormous strategic advantage because those existing product vehicles are the only ones that will be considered for installation going forward. As all development dollars have been eliminated in the short term, existing products will be funded as the military gets renewed interest in them.”

The ARMY has set a very an ambitious goal of making a large percentage of their next generation trucking fleet into Optionally Piloted Vehicles (OPV). Researchmoz also sees a large civilian application for urban law enforcement and other security applications. They state:

“Markets at $637 million in 2009, sink to $364 million in 2011 as development funds are cut, and grow again to reach $2.9 billion by 2016 as companies leverage existing technology to field military unmanned ground vehicles.”

Agriculture is another area that large-size UGVs are expected to be utilized.

All UGVs (Small, Medium, and Large)

“UGVs used in defense applications, i.e. procured by defense departments and ministries of defense, account for an estimated 85% of the entire body of fielded UGVs.”

Market Info Report, in the above link, states the Defense component will continue to dominate the UGV market, but others have reached an opposite conclusion.

As with large UGVs, Market Info Group states that established developers of all-sized UGVs will enjoy an enormous advantage, because of the lack of research money.

Visiongain’s estimates that that worldwide government spending on all UGVs in 2011were total $702m. They are optimistic about continued demand:

“Our analysis demonstrates that the global UGV market is a growing marketplace offering government contract opportunities that are likely to see a range of companies realizing commercial success, from the major global defense and security systems integrators to specialist autonomy software developers.”

Telepresence with the closely related applications of health care and home care are expected to be prominent applications for small and medium-sized UGVs.

While there seems to be a general agreement that the currently dominant unmanned system suppliers will continue to dominate (because of the lack of governmental development funds), there are other areas for opportunities for start-ups.

“…there is a widening gap between growing UAV fleet and UAV infrastructure development, especially in such sectors as training; service, support and maintenance; and data management. This gap creates a number of market opportunities for UAV vendors, both large defense contractors and small technology companies.”

While this is especially true for large UAVs, it is also true for all unmanned systems. As mentioned above, sensors are the most common payload by far. The sensor/payload markets present opportunities for non-manufacturers and emerging players.

Other articles in this series

Long-time readers know that that this is not the first time I have peered into the future of unmanned systems. Here are some other articles:

Everything-Robotic blog did an excellent report on AUVSI North America 2012, and identified key companies making the transition to civilian applications.

AUVSI market reports are relatively inexpensive; $99 for members. Home healthcare is available now. Agriculture and First Responder will be available in the future.

If you enjoyed reading this article, you may want to check out William Finn’s blog at blog.amrel.com.