The Association for Unmanned Vehicle Systems International projects that the integration of UAVs would have an $82 billion economic impact on the economy by adding 100,000 jobs from 2015 to 2025. 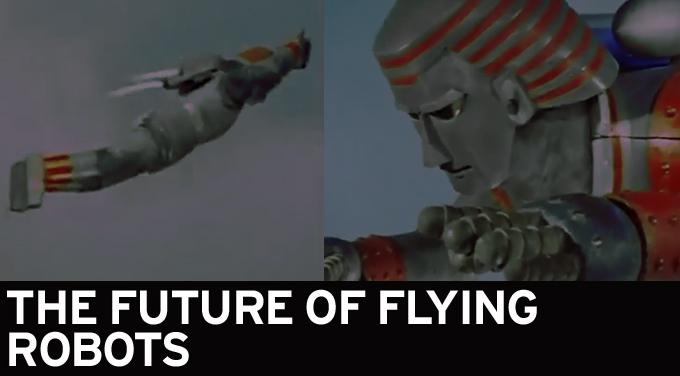 Flying robots or unmanned aerial vehicles (UAV) are already in use for a variety of assignments, such as police surveillance, perimeter observation, spraying crops, spotting forest fires before they get out of control, locating lost children, and by hobbyists.  Flying robots with cameras allow law enforcement to assess dangerous situations before intervening or engineers to check on bridges and dams where human observation would be impractical. They might even be used to deliver pizzas.

In a large business complex or college campus, UAVs could be used to transport documents between buildings, speeding up delivery time and saving manpower costs.

Designer Adrian Perez Zapata came up with Mab, which harnesses hundreds of mini-robots equipped with a cleaning solution to spruce up homes. We are already familiar with Roomba and Winbot, as household cleaning robots. 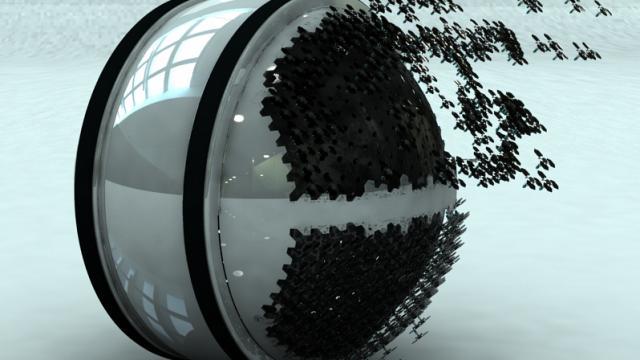 The Mab concept requires users to load water and a chemical substance into the system's spherical core. The cleaning liquid is then distributed to 908 mini-robots, which are each equipped with propellers for flying. After that, the mini-robots are dispatched, scanning the home and cleaning surfaces with droplets of fluid. Dirt is captured and carried back to the core. The little bots would be powered by the solar energy collected via their wings. Mab can be scheduled for cleaning cycles, as well as custom cleanings for specific areas of a house. This concept was entered in the Electrolux Design Lab competition.

A professor of engineering at the University of Pennsylvania, Vijay Kumar, has been experimenting with small robots and their implementation into real world tasks. His mini UAV’s are about 36 inches in scale and contain sensors which allow autonomous control indoors. They utilize 4 rotors like a helicopter, which allows them to hover, climb, tilt and react. These flying robots can be used as first responders, where they can enter an unknown environment that would otherwise be dangerous to a human responder and map out the surrounding area using sensors. 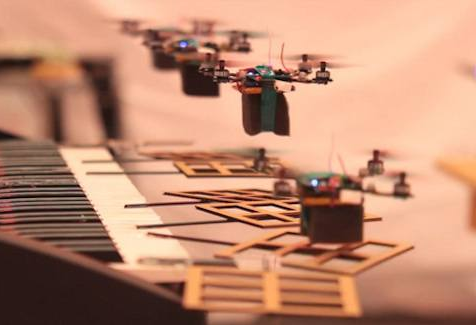 They can also carry cargo either individually or as groups called swarms to multiply their cargo capacity. They use a camera to determine their position rather than GPS. These mini helicopters can do flips, avoid obstacles, and shift direction effortlessly, all on command. Toss one up in the air, and it finds its balance and flies back to the hand that launched it.

Harvard engineering professor Robert Wood has been trying to get a fly-sized drone off the ground for the last twelve years. His robo-fly is smaller than a quarter. The object was to build swarms of insect size robots that can be used to hunt for missing people, spy on enemies, track toxic pollutants or even pollinate crops if real bees are decimated by disease. 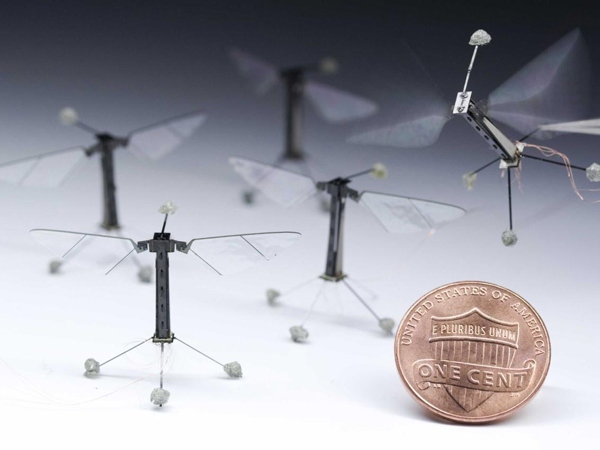 The robo-fly weighs only .002 ounces, and flaps its wings at 120 beats per second, using piezoelectric actuators, which are strips of ceramic that expand and contract when an electric field is applied. Thin hinges of plastic, embedded within the carbon fiber body frame, serve as joints; and a delicately balanced control system commands the rotational motions of the robot with each wing controlled independently in real-time.

Canada based Aeyron Labs designed a flying robot, called Scout, which is able to track criminals with ease. Authorities just need to point out a certain location on the built-in Google Maps through its touch screen controller and the robot will fly to the location at 30 mph and record the surroundings with a high definition video camera and stream the images live to an iPhone. 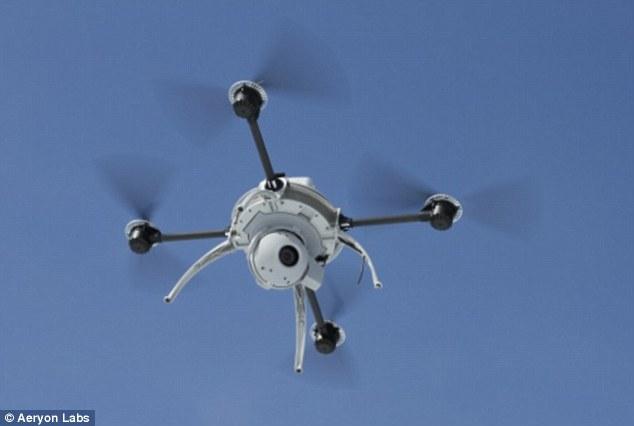 The Scout can fly more than 400 feet above the ground or zoom in for a close-up from 900 feet away, making it virtually impossible to be seen during a mission. With its four rotor blades, it is extremely quiet. The Scout has already been used in Central America on drug busts.

CastleOS launched the SmartHawk home flying robot, which can stealthily fly a predetermined course around the perimeter of your property keeping lookout for unwanted human visitors or animals, and providing real-time weather data linked to your home’s smart thermostat. 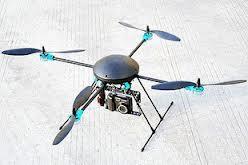 The robot’s HD and HD-IR cameras, digital microphone, and remote-uplink speaker allow for unparalleled flexibility in property monitoring. Operating the robot is as simple as programming property boundaries into its onboard GPS map, installing the easy-to-setup home launcher, and selecting a pre-programmed or custom watch pattern, such as “Dusk-to-Dawn” mode.

One industry that would benefit the most from commercial flying robots would be agriculture. Some experts consider that 80 percent of the industry’s growth could come from precision farming, where UAVs help farmers monitor crops in a more efficient and timely manner. 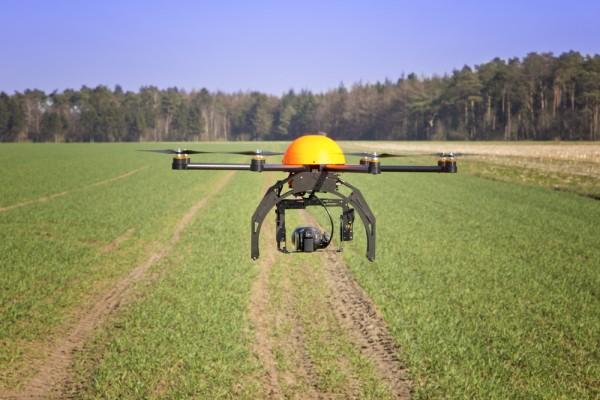 $300 UAVs can be used to check for disease and irrigation levels instead of employing a $1,000 an hour manned aircraft. Early signs of plant damage show up in chlorophyll, the energy-making machinery of a plant. This damage changes how the plant appears in infrared and near-infrared images, which could be captured using UAV imagery, which would allow farmers to direct pesticides just to the plants that need them, reducing how much ends up in the food supply.

A BAE Systems Jetstream research aircraft flew round trip from Preston in Lancashire, England, to Inverness, Scotland. What’s so important about this flight? Just the fact that its pilot was not flying the aircraft, but sitting on the ground in Warton, Lancashire and that the plane did most of the flying itself. 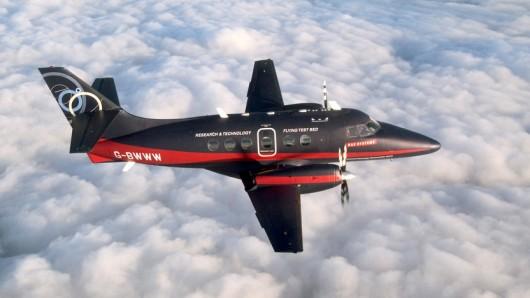 The alteration of a standard commercial prop plane into an UAV may be the biggest revolution in civil aviation. Whether they’re tiny flying robots smaller than a quarter that fly within a few hundred feet of their operator, or huge winged planes piloted via satellite thousands of miles from the joystick, UAVs are taking to the skies in ever-increasing numbers for a variety of applications.

The main concern over the commercial use of UAVs is their intrusion on privacy rights. This concern is being addressed by 34 states, which are in the process of passing legislation that would restrict the use of UAVs. In addition, the possibility of mid-air collisions and debris falling on homes and people is greatly enhanced.

Congress gave the FAA until 2015 to integrate UAVs into the National Airspace System. Once this happens, up to 30,000 flying robots could populate U.S. airspace in the first years. By the way, drones are also UAVs, but the term is not much used by the commercial industry because of the negative publicity that is attached to drones from their use by the CIA and military.

The Association for Unmanned Vehicle Systems International projects that the integration of UAVs would have an $82 billion economic impact on the economy by adding 100,000 jobs from 2015 to 2025.