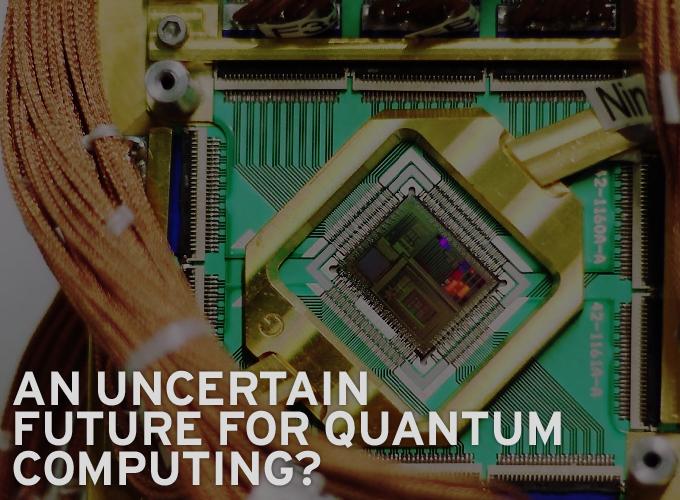 Quantum computers use atoms to perform calculation. The computation speed depends principally on Qubits (quantum bits). These quantum bits are the fundamental building blocks of a quantum computer. Recent developments in the field of quantum research expect to eliminate/drop the Moore’s law by 2020.

The future of Quantum computers as of now is not very certain particularly due to already known problems in areas such as de-coherence, error correction, output observance and cost related issues. But, if scientists succeed in developing a practically useful quantum computer, it may replace traditional computers in sectors such as robotics (Industrial Automation), cyber security, alternative energy etc. Such computers may also be deployed for solving emerging tactical problems like Tsunami alerts.

Quantum computers can scale up the possibility of enhancing computation power to a new and unanticipated peak point by providing a fast and efficient platform for high performance computing.

At present, we don’t have very efficient systems capable of solving tactical problems such as

Today, processor die size is drastically shrinking, but there is not enough software solutions developed for harnessing the full processor potential. Computing power over the next few years will perhaps get skyrocketed with the advent of quantum computers.

Many experts argue that the computing world today doesn’t even have the right programs to actually utilize a 1 GHz mobile processor in the best possible way. It’s not more processor speed but better programs we need urgently right now, or is it?

Have a look at some areas where quantum computers can play a vital role in near future:

Artificial intelligence (AI) was primarily meant to assist humans in executing complex jobs such as handling operations in the middle of a furnace blast or during space and military missions.

Today, robotic systems are heavily used in the industrial automotive world for boosting production. Introduction of quantum computing can give a major boost to AI by ensuring creation of even more powerful & intelligent robots. The capability of encoding information in fuzzy quantum states will multiply the power of these artificial creatures.

It would be possible to scan through large databases in few seconds with qubits.

Algorithms have already been developed and ready for implementation in quantum computers now. But recent failures in controlling Qubits inside laboratories, pose serious questions regarding the viability of quantum computing.

Developed robots featuring powerful qubit will be able to break maximum encryption code within near zero time. A quantum computer will possibly crack any possible password in an instant. No security algorithm will then be able to provide 100% security to content placed on web servers. As far as the Internet is concerned, everything (yes, everything) will have to be redefined using quantum computers.

Qubits (known as Quantum dots in solar terminology) can be largely deployed in solar panels to replace the current photovoltaic cells technology. Quantum dot is a nanoscale particle of semiconducting material that can be embedded. It can therefore revolutionize the renewable energy sector.

Qubits can also be used to make quantum batteries in order to store energy generated by powerful windmills.

Teleportation (if it ever becomes a reality) will allow transfer of matter from one place to another without traversing through physical medium. With this technology, (some say) time travelling can become possible which still is considered a myth.  Quantum teleportation technology will enable humans to travel far distances without losing a moment as seen in fictional/sci-fi movies.

Quantum computers can be connected in series to form a quantum network, thus building a smart grid. They will offer high encoding and decoding speeds with fast transfer of information (qubits).

The already developed and much touted quantum computer from ‘D-Wave’ systems is 3600 times powerful than a conventional PC. But the project was declared a failure on application front by Google.

Questions about the real-world feasibility of such expensive projects remain unanswered.

But, given the fact that everything from cellphones, wireless networks and electricity was no less than a miracle few dozen years ago, quantum computing too may appear as a miracle at first and slowly become an integral part of our lives.

About Amy Baker
A computer science engineer, Amy holds a Masters Degree in Quantum Computing. She is based in Texas.