The next chapter in the industrial revolution is 3D printing, delivering a huge impact on additive manufacturing. It will not only create thousands of new jobs, but it will create many new businesses. 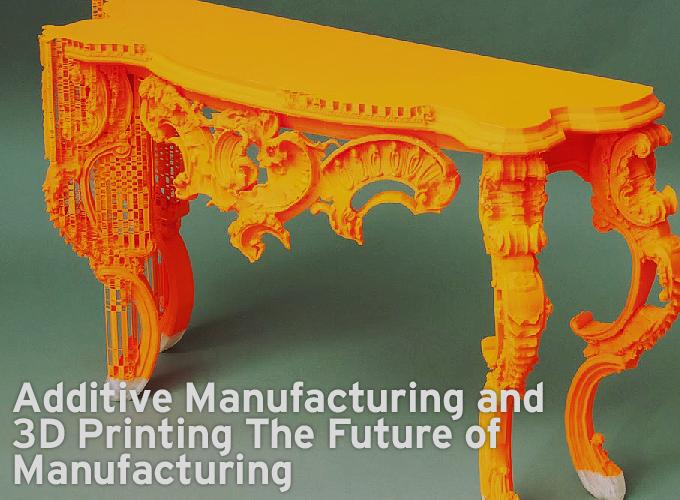 I briefly talked about 3D printing in 2012, but because of the advances in the technology, this topic is worth re-visiting. 3D printing uses digital 3D design data to build a component part by depositing material in layers. This process is called Additive Manufacturing (AM). The term "3D printing" is increasingly used as a synonym for AM, which is more precise in that it illustrates a production technique, which is differentiated from conventional methods of material removal. Instead of milling a work-piece from solid material, AM builds up components layer by layer, using materials which are available in fine powder form. A range of different metals, plastics and composite materials may be used. Even more advanced is the use of living tissue to make replacement body parts.

A laser device starts by applying a thin layer of the powder material to a base platform. This process is called sintering, where the powdered material is held in a mold and then fused by a laser at exactly the points defined by the computer-generated component design data. The atoms in the powder particles diffuse across the boundaries of the particles, fusing the particles together and creating one solid piece. The base is then lowered and another layer of powder is applied. Once again the material is fused so that it bonds with the layer below at the predefined points.

Some 3D printing laser-sintering systems have a central build area with depositories for the powder material on each side of the fabrication area. A roller spreads a layer of power from either depository onto the fabrication area. Then one or more lasers move across the fabrication area in a precise pattern, melting an exact portion of the powder, which then hardens as it cools. The powder not exposed to the laser beam remains loose. This process is repeated over and over again until the part is finished.

All 3D printing technologies start with a CAD program that describes an item. The CAD program is then transformed into a standard tessellation language (STL) file format. The STL format is then fed into the 3D printer’s control, which takes the STL file and separates it into hundreds or thousands of “slices.” The control feeds the building data on each slice into the 3D printer, which then builds the item, layer by layer, based on the slice information. The thickness of these slices average 0.1 mm, but can vary.

In the next three years, AM 3D printing is expected to reach $6 Billion in sales. Hobbyists, do-it-yourselfers, engineering students, and educational institutions spent $105 million in two years – not counting the value of materials, software and products. In the next twenty years, we can expect to see applications in nano-manufacturing, architecture, biomedical implants, bio-manufacturing, and full body organs.

Presently, the fastest-growing industries for AM 3D printing are medical, dental, automotive and aerospace. In the biomedical industry, we will see prosthetics, implants, replacement tissue and intricate body parts. The aerospace industry is a major user with the entry of metals-fed AM 3D printers resulting in advancements of the technology owing to benefit of speed, cost and materials.

Engineers believe 3D printing has the potential to replace conventional casting, forging or machining of parts in the aerospace industry and initiate a completely new level of performance in parts. There are even plans to send a metal AM 3D printer to the international space center so that the astronauts can print spare parts in orbit to save transportation costs.

AM 3D printing doesn't always produce parts precisely enough for use in the aerospace industry, because when printing large metallic items, there's a certain amount of distortion that occurs. BAE Systems has a new technique where parts can be made stronger, and less distorted, which will enable large parts to be printed, such as airplane wings.

Some dentists can scan a patient’s teeth, enabling the creation of better fitting crowns and allowing oral digital scans that replace messy impression-trays. This process can be used to fabricate dental objects, such as implants and crowns quickly and easily even where features such as overhangs, sharp corners and undercuts are required. A process that normally takes two weeks, now only takes an hour.

Conventional maxillofacial prosthetics are incredibly laborious and expensive to produce with silicon ears and noses costing around $4,000 each. Presently, they are constructed by taking an impression of the injured area, sculpting the body part out of wax as it should appear, and then casting that shape in silicon.

Using an AM 3D printer, medical personnel can use a digital camera to photograph the injured area, along with the patient's skin tone, to create a digital model of the needed part before sending it off to a color 3D printer. The cost of the first impression is about the same as a handmade prosthetic, but damaged replacements can be easily and quickly made for around $150.00.

The AM 3D nano-scale production process gives designers a great deal of freedom, which optimizes functionality for applications such as nozzles for the automotive industry, components for medical devices, or aerospace parts.

Nanotech and biomedical industries are using AM 3D to achieve rapid, DNA-specific, drug design and manufacturing. Medical scientists can now print, molecule by molecule, the exact compound that they want, enabling them to rapidly, and accurately specify the position of every atom in a compound that they design.

Scientists are able to chemically synthesize trillions of identical copies of the designed molecules. From conception to production, the process can be performed in weeks, or sometimes days, which is a great deal faster than existing drug creation techniques that rely on trial and error for screening useful compounds.