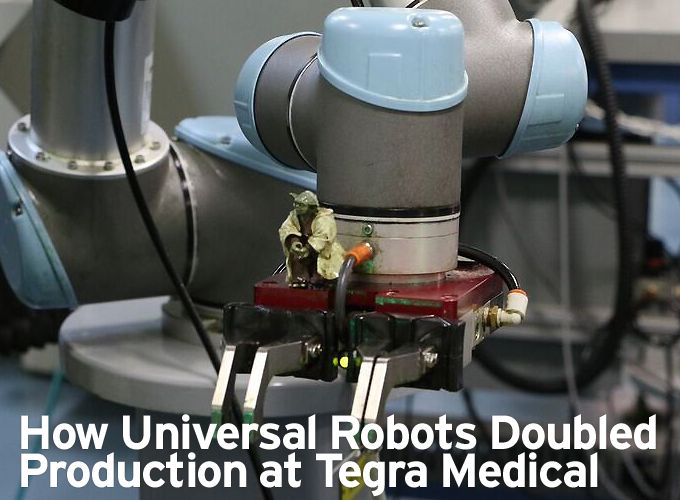 “It’s an unusual for us and it’s unusual in the industry to have a mixed model cell like this feeding three different products simultaneously in the same machining cycle,” says Hal Blenkhorn, Director of Engineering at Tegra Medical.

The robot arm performing the machine tending is a UR10 from Universal Robots. With a reach of 51 inches, it manages to pick up blanks from three different hoppers, feeding two of them into two grinders while the third product goes into a lathe where an internal cutting tool creates a bevel edge on the end of a Meniscal repair device.

According to Paul Quitzau, Senior Engineering Manager at Tegra, setting up the machining cycle is about timing:

“The UR10 starts with the slowest cycle first, then goes on to the next. It’s like popping bread in the toaster and making your eggs in the interim, then having everything finish at the same time.”

Not only is the mixed model cell a rare sight in the industry, the fact that the robot can operate with no safety guarding right next to employees is a radical break away from traditional industrial robots that stay fenced off from humans.

“The new collaborative class series robots had just come out, when we started looking into automation. We really thought that was something beneficial as we wanted to put a lot of our operations together in mini-cells in confined work spaces where operators have to interface with the automation. Erecting big cages if it was a regular industrial robot wouldn’t have been advantageous to what we were trying to do,” says Blenkhorn.

Before Tegra built the UR10 robotic cell, they started out with two smaller cells each tended by a UR5 robot arm, UR10’s “little brother”, featuring same 4 mils repeatability but with a reach of 33.5 inches. The UR5 picks up the blank from the feeder and then moves it between the lathe, the grinder and the conveyor in a cycle that now takes only 10 seconds compared with the 22 seconds it took with manual labor.

“We were looking at cost, accuracy, ease of implementation and ease of use. The Universal Robots seem to nail it in all those areas; the price point for what they were offering was extremely competitive, the accuracy and the design was just far above and beyond what we thought anyone else in the market had,” says Blenkhorn.

The UR robots are classified as collaborative due to their built-in safety system that makes the robot arm automatically stop operating if it encounters objects or people in its route. A feature that enables humans and robots to work side-by-side with no fencing as usually required with traditional industrial robots. As an extra safety precaution, Tegra installed safety mats. Once an employee steps onto the mat and into the cell, the robot stops automatically. The robot continues its operation when the operator steps off the mat and hits a prompt.

“This setup allows our operators to still be in the work envelope – and not every interaction requires the robot to stop. When the robot drops pieces onto the output conveyor, our operators can go and access the conveyor from the other side to remove the pieces,” explains Quitzau.

Avoided changes to the process

“Being in the medical industry, we were up against process change controls. We can’t be changing our process without notifying our customers and going through validation activity. But by simply replacing the operator with the robot, we essentially didn’t change the process. We just changed the handling of components in-between the processes. That was a huge win for us,” says Blenkhorn.

“We can offer our customers the price reductions that go with that, we can keep up with production demand, and we’re not really burdening anyone with additional qualifications and validation activities.”

Nobody loses their job to a robot

The tangible benefits of the robot implementation is a doubling of throughput and 11 full time positions freed up.

“Obviously when you mention robots, people think they’re going to potentially lose their job. In 2014, our CEO had the mandate to say that our facility was going to become the robotics center of excellence for the Tegra Medical platform – but that nobody is going to lose their job to a robot,” says Blenkhorn.

Instead, Tegra has repurposed the operators into other processes and operations to keep up with company growth.

“When we see an operator that does nothing but load a part every 10 or 20 seconds, we try to put more value add to them by training them new skills, whether it’s a different operation or by having them become the robot supervisor in that area.”

The one millionth part just achieved

Tegra just achieved the one millionth part out of the first UR5 cell in less than a year.

“The accuracy and repeatability over time was a big concern for us. We were apprehensive, questioning whether we could put the robot through this kind of duty cycle in a high volume cell and get year-after-year repeatability.  We spot check the   few months to make sure the axes are performing and it is as good today as a year ago when we turned the cell on,” says the Tegra Director of Engineering.

“We maintained the manual cell next to it at first. Standing back and watching the two operations, you really get to appreciate the repetitive motion of the robot. It never misses a beat and meanwhile the manual operator has to work very hard to keep up, tending two machines, taking a break, talking with co-workers, spending time getting a quality check. Later on in the day, the same operator is now getting fatigued, taking a little bit more time between parts while the robot appears to be getting faster. Without any hesitation we turned the manual process off and never looked back.”

Quitzau programmed Tegra’s three robotic cells. A process he found very straightforward. A UR robot comes with a touch screen pendant that all programming is done through. Directing the robot arm can be done either through arrow keys on the screen, or by simply grabbing the robot arm and “teaching” it the desired moves between waypoints. 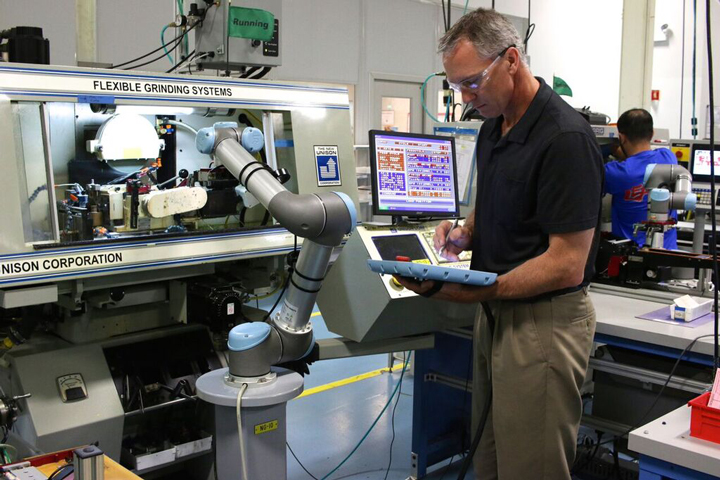 Senior Manufacturing Engineer Paul Quitzau found the programming of the UR robots very straightforward. He was able to do this on his own with no prior programming experience.

“Anyone able to think logically and able to envision how a process ought to run can program a UR robot; The screens are laid out friendly and the commands are almost self-intuitive. I pieced together the entire application without much issue - and I’m not a programmer, I’m a mechanical person,” says Quitzau.

As Tegra abandoned the manual parts handling, the company also achieved improved product quality. On the table in front of Technical Lead Dick Guilbert, who performs the quality inspections, only a few parts have been placed in the “reject” box.

“You get more consistency because you don’t have people feeding parts differently. Now, we get a few rejects during the day, before we got considerably more than that,” he says.

The benefits of modular design

Another benefit Quitzau stresses is themodular design. His team likes knowing that spare parts are held at their distributor’s facility or at a local UR office that can overnight parts if need be:

“We didn’t have such a great experience with some of our other robotic applications. If a robot went down, it was time trouble shooting over the phone. It was a week or two of downtime waiting to get parts in, followed by an external engineer having to come in and install and requalify it. With the UR robot’s modular design, we can install parts ourselves without being handcuffed to an integrator. We think this is a better way to go for high volume cells.”

Laser marking and chemical handling next

Tegra Medical just purchased its 4thUR robot, another UR10 which will be loading parts in and out of a laser marking system.

“The larger reach of the UR10 again gives us the ability to run multiple machines, having more part numbers manufactured in a given cell,” says Quitzau adding that the UR robots could also be used to ensure process stability:

“For example manual cleaning operations where baskets or parts are being loaded in and out of cleaning and rinse tanks at certain intervals. Another potential application is what we call a wet process, where the robots could move chemicals through a process that our employees today have to wear smocks, gloves and face masks to handle. It’s a very unpleasant task and it would be great to have the robot take this on.”

“We’re seeing on average between three and six months ROI with these cells. Typically, when we go into projects, we’re anticipating around a one and a half to two year return on investment, so we’ve been extremely pleased with the implementation of these new collaborative robots.”

Tip of the iceberg

Tegra Medical bought the UR robots from UR distributor Axis New England where President Todd Clark feels he has just reached the tip of the iceberg in terms of how manufacturers might use collaborative robot technology:

“As we see customers starting to deploy these applications, they start realizing how these robots can really be a game changer in their manufacturing and it leads to additional applications, allowing companies to remain competitive here in the United States.”

About Universal Robots
Universal Robots is a result of years of intensive research in robotics. The six-axis robot arms weigh as little as 24 lbs. with reach capabilities of up to 51 inches. The product portfolio includes the collaborative UR3, UR5 and UR10 robot arms named after their payloads in kilos. Repeatability of+/- .004” allows quick precision handling of even microscopically small parts. After initial risk assessment, the collaborative Universal Robots can operate alongside human operators without safety guarding. If the robots come into contact with an employee, the built-in force control limits the forces at contact, adhering to the current safety requirements on force and torque limitations.
Intuitively programmed by non-technical users, the robot arms go from box to operation in less than an hour, and typically pay for themselves within 195 days.  Since the first UR robot entered the market in December 2008, the company has seen substantial growth with the robotic arms now being sold in more than 50 countries worldwide. The company is headquartered in Odense, Denmark where all development and production is carried out.  In 2015, the company was acquired by Teradyne, a leading supplier of automated test equipment.