This application produces a medical device with parts that are extremely heat sensitive, so cycle times have to be consistent from part to part.

“We’re lucky to live in a place that has high wages and low unemployment, which is great on a daily basis normally, but it’s difficult for someone who runs a business.”

The collaborative robots are used in three different applications. The first robot tends a complete machine cycle; it picks and places “book frames” that hold pieces to be molded into the injection molding machine, transports the units to a trimming fixture, places the part in front of an operator for further handling, and finally pushes a button to activate the cycle again.

This application produces a medical device with parts that are extremely heat sensitive, so cycle times have to be consistent from part to part.

“We were having trouble making one good part with manual labor, let alone the various shifts tending the machine cycle differently,” says McGillivray.

“Universal Robots’ UR10 robot arm gave us a perfectly consistent cycle. We went from having three operators on a single shift to being able to run three shifts per day with just one operator per shift. So we essentially quadrupled our production capacity and our scrap went from significantly high to near zero. It’s been an extremely successful application for us.”

Hand off with Cartesian robot

The second injection molding application uses a traditional cartesian robot that drops a molded piece down a slide where the UR robot picks it up and  places it in a degating fixture, then palletizes the part on a table in front of the operator for inspection. Previously, the parts would fall onto a conveyor, which often damaged parts, and the operator had to catch them before they unloaded.

“It was very challenging for the operator to keep up, making sure the parts didn’t fall and trimming them as well, resulting in a lot of ruined parts. Now we still use one operator, but they can be there one quarter of the time they would otherwise,” explains McGillivray.

Robots paid themselves back in two months

The third robot is deployed in a kitting application. Using a vacuum gripper the UR10 picks up a “clam shell” - the bottom part of a plastic box – then it picks and places sterile wipes and saline solution into the clam shell, and pushes the loaded shell onto a conveyor. Before the UR10, Dynamic Group used six to seven employees at once to do this kit assembly application.

“It was fast paced and very high volume. It wasn’t sustainable. Now we’re able to run it with as little as two people. Having this type of success out of the gate as first time rookies at this stuff has been phenomenal and totally unexpected. Our return on investment was less than two months, and we can even go further because we’re able to adapt the robots to other products so quickly,” says the CEO.

Surprised that 6-axis robot was affordable

He initially thought Dynamic Group couldn’t afford such a versatile and capable automation solution.
“When I started looking, I assumed I was talking hundreds of thousands of dollars per installation. I was surprised to find that we could afford a six-axis robot and a collaborative one at that,” says McGillivray who also assumed he would need a very expensive programmer or engineer to install them.

“I’m not an engineer and within an hour of delivery, I had them set up and running the first test tasks. Their great user interface made them extremely easy to program. So my initial assumptions in terms of investment and extra hires were completely wrong.”

It took Travis Oksendahl, automation engineer at Dynamic Group, about two days to get the robots programmed once the robotic cell was set up: 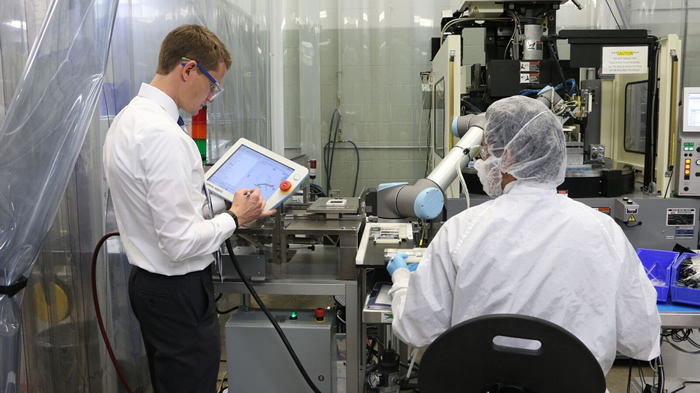 “Compared to traditional robots, I would say the UR robots are a lot easier to teach and program from drag and drop applications. You can also program the robot with the “Teach Mode”, where you simply grab the robot arm, moves it where it needs to go and it teaches the robot this movement as a point. Once you’ve set your points, you simply hit play and the robot will replay through these.”

The Minneapolis injection molder is able to quickly redeploy their UR robots to completely new tasks in short order.

“All the robots are on bases that we can transport around on wheels and slide from press to press and application to application. The fact that we can quickly reprogram and redeploy these robots enables us to effectively address our high mix/low volume challenge,” says McGillivray. 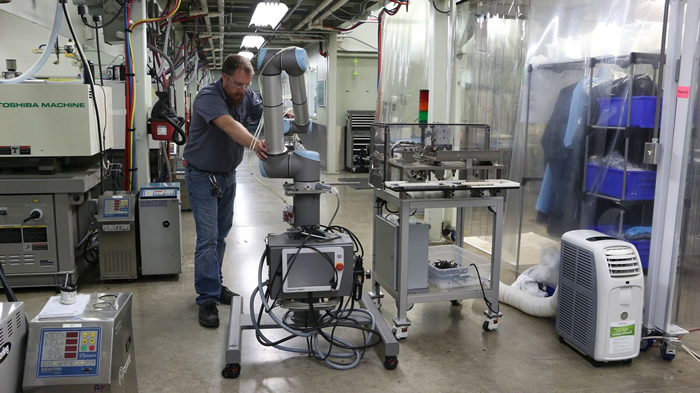 The mobility of the UR robots is in stark contrast to traditional industrial robots that usually stay bolted down in a safety cage. The UR robots can work collaboratively right alongside Dynamic’s employees due to a built-in safety feature causing the robots to automatically stop operating when they encounter obstacles in their route. 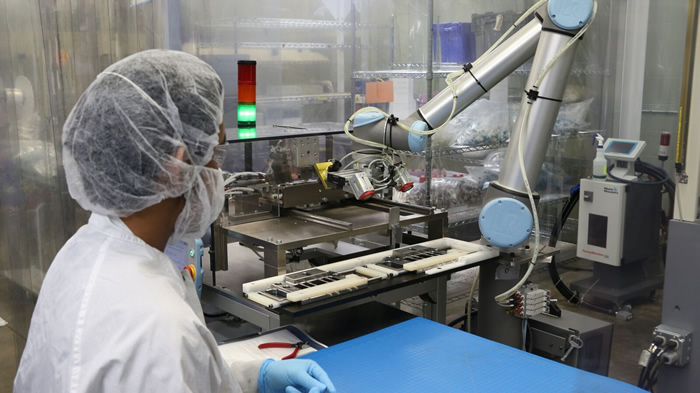 “Our employees are working directly with the robot, there is no fence in between. That’s a huge savings to us on time, needing to manufacture, and costs to manufacture those enclosures and of course floor space. We’re able to fit a lot more automation in a much smaller footprint,” says the Dynamic Group CEO.

Tested robot on own body

All three UR robot models (UR3, UR5 and UR10) utilize a unique patented technology to measure electrical current in the joints to determine force and movement. If the robot arm measures a force stronger than what it is programmed for (can be down to 50 Newton in UR3) it automatically stops.

“I wanted to really understand how well the safety features worked on the system. When Universal Robots distributor Braas Company first showed me the robot, I asked them to pummel me with the robot, and they wrote a program that allowed me to walk in its way as it’s going back and forth. It didn’t hurt, sensed me immediately, and stopped just like I’d want it to,” says McGillivray.

When the robot goes into a safety stop, the operators can quickly start the robot back up without any assistance from a programmer or an engineer by interacting with two buttons on the touch screen.

“Uptime with these systems is fantastic, compared to traditional industrial robots the training to set up and operate a collaborative robot is minimal.”

Contrary to popular belief, having robots take over tasks previously handled by employees did not lead to staff layoffs at Dynamic Group.

“We needed to make better use of the labor we had on hand. Instead of using our employees as labor, we needed to use their brains. That’s what Universal Robots has helped us be able to do. We lowered our labor content per part, and gave people better jobs,” says the injection molder who is now training employees to operate, install, and program the UR robots.

McGillivray and his team are also working on getting more UR robots into their production. Next step will be installing the smaller UR3 model directly on presses.

“The UR robots’ number of I/Os and the ease of access to them, makes this relatively simple to do. With quick tool changes we should be able to address our high mix low volume situation extremely well. We’re also looking to integrate a UR with a structured lighting system for doing micron level inspection 360 degrees around a part. That’s a capability we’re anxious to get in place.”

Based in Minnesota, Dynamic Group is a privately owned contract manufacturer specializing in providing complex injection molded plastic components and assemblies and high precision molds for plastic and powder. The company primarily serves the medical, electronics, and technology industries.
www.DynamicGroup.com

About Universal Robots
Universal Robots is the result of many years of intensive research at Denmark's successful robot cluster, which is located in Odense, Denmark. The company was co-founded in 2005 by the company’s CTO, Esben Østergaard, who wanted to make robot technology accessible to all by developing small, user-friendly, reasonably priced, flexible industrial robots that are safe to collaborate with and that on their own can be used to automate and streamline processes in the industry. The product portfolio includes the collaborative UR3, UR5 and UR10 robotic arms named after their payload in kilos. Since the first UR robot launched in December 2008, the company has experienced considerable growth with the user-friendly robots now sold in more than 50 countries worldwide. At just 195 days, the average payback period for UR robots is the fastest in the industry. The company, a part of Boston based Teradyne Inc, is headquartered in Odense and has subsidiaries and regional offices in the US, Spain, Germany, Singapore, Czech Republic, India, and China. Universal Robots has more than 200 employees worldwide. www.universal-robots.com.