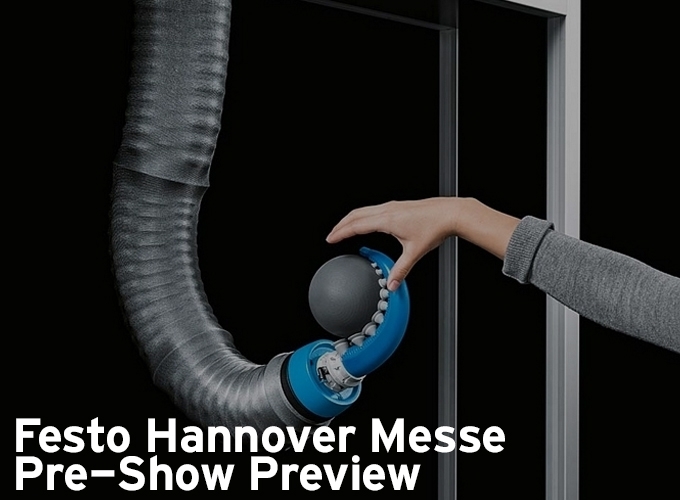 Five things to look for at Festo's Hannover Messe booth:

With the BionicCobot, Festo has now developed a pneumatic lightweight robot for the first time, which due to this flexibility can work together with humans directly and safely. In terms of its kinematics, the robot is based on the human arm. Like its biological role model, it solves many of its tasks with the help of sensitive movements. Due to its unique drive concept, which works according to the agonist-antagonist principle, the motion dynamics and rigidity can be variably adjusted.

BionicCobot: a pneumatic lightweight robot with human movement patterns as a sensitive helper in human-robot collaboration

Sensitive and gentle or powerful and dynamic – in terms of its movements and functionality, the BionicMotionRobot is inspired by an elephant’s trunk and an octopus’s tentacles. The pneumatic lightweight robot features 12 degrees of freedom and, with its flexible bellows structure, can effortlessly implement the fluent motion sequences of its natural role models. The concept of the flexible kinematics is based on the Bionic Handling Assistant from 2010, which, due to the safe collaboration between man and machine, was given the German Future Award

Festo now presents a bionic gripper called the OctopusGripper, which is derived from an octopus tentacle. The gripper consists of a soft silicone structure, which can be pneumatically controlled. The OctopusGripper thus even fulfils the high requirements of soft robotics and can be used without hesitation for working immediately with humans.

The future of pneumatics: After the invention of the valve manifold, a further breakthrough innovation in pneumatics is now awaiting you in the form of the Festo Motion Terminal.

Learning from nature. For many visitors, the bionic projects of Festo are among the highlights of the Hannover Messe. This year, principles from nature again provide inspiration for technical applications and industrial practice.

Superconductors are materials which below a certain temperature can "freeze" the field of a permanent magnet at a predefined distance and can thus hold it in suspension.

With its three current SupraMotion exhibits, Festo is further extending the spectrum of storage and movement possibilities shown to date and is showcasing three new possible applications.

With SupraShaker, a plate is suspended above a cryostat with superconductors. An eccentric electric motor sets it in vibration via a magnetic coupling.