America's retailers are closing stores faster than ever while demand for warehouse workers by online retailers is higher than ever. Retailers and logistics companies have been opening facilities at a record pace and in this fast-paced world, warehousing and logistics managers are looking for robotics solutions to remain competitive. 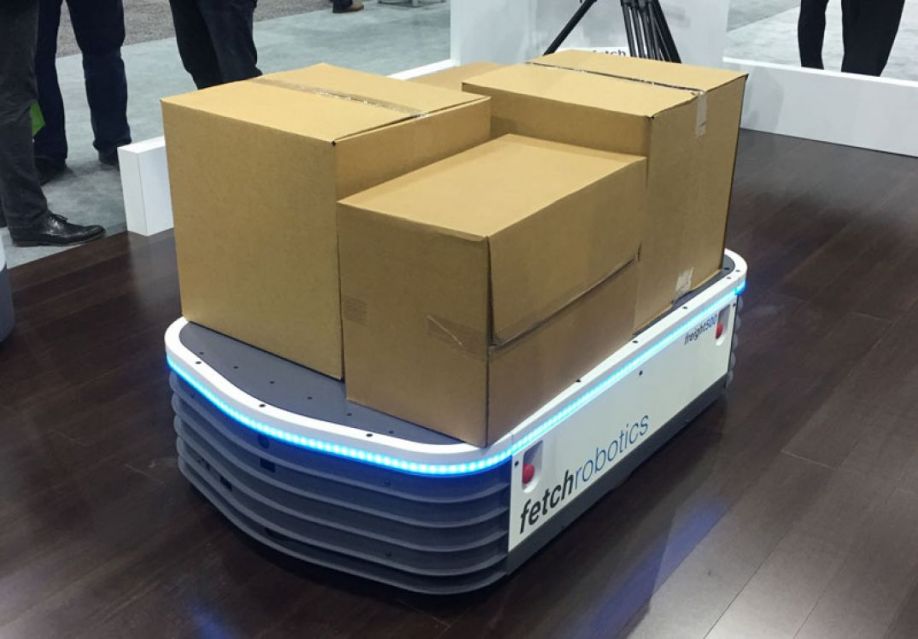 Chicago's huge McCormick Place Conference Center was once again home to the Automate and ProMat trade shows. ProMat for material handling solutions; Automate for robotics. Over 900 exhibitors covered 350,000 sq ft at ProMat while 400+ companies exhibited at the Automate show. Most of the companies listed below exhibited at one or both of these two shows.

According to an article in The Wall Street Journal, the warehousing and logistics sectors are expanding dramatically as more people shop online. The two sectors accounted for 945,200 jobs in March, up 5.3% over 2015, according to the Bureau of Labor Statistics.

Tractica, a market intelligence firm, forecasts revenue for the two sectors will grow exponentially and reach $22.4 billion by the end of 2021.

Hence the many new mobility products at the ProMat show and the mood of the attendees to be buyers/adopters rather than looky-loos.

Two years ago there was little discussion and promotion of bare-bones mobile robots although there were many guided AGVs, forklifts, self-driving vision kits and speciality tows as well as mobile picking solutions.

This time there were lots of new vendors and much discussion about mobility and point-to-point mobile platforms to carry everything from cases to pods to shelves. Danish startup MiR (Mobile Industrial Robots) is on track to sell 600 mobile robots this year, up from 200 in 2016. Fetch, the Silicon Valley startup offering a pick and deliver solution, has altered their business plan as their clients have expressed needs that can be met with two new simple Freight robot platforms carrying loads from 500 to 1,500 kilograms plus their existing mini-carrier for loads under 80kg. OTTO Motors and their OTTO robots, like Fetch, carry loads up to 1,500kg. All deliver their loads safely with lights, bells and signals that interact with humans in their path. And all rely on user companies to customize what's carried, the payload, where the payload is to go, and what special fixtures are needed to hold, grab, slide, and otherwise handle the goods being carried.

Otto Motors, Fetch and MiR have discovered a market segment of point-to-point deliveries and pickups using a basic mobile platform and letting the end user add any needed shelves or fixtures. All three companies are reaping the benefits of this marketplace by a rising number of orders from both industrial and warehousing sources.

Although there were many startups attempting to fill the void left by Kiva Systems as their goods-to-man system was taken inhouse by Amazon, many of those companies are finding resistance to their picking solutions because users prefer to use humans for that operation because they are faster and more accurate. But these same end-users want help moving picked items, consequently the interest in bare-bones mobile robotic platforms as "gofor's." These mobile platforms all use various systems of navigational awareness with lights and beeps to interact with humans. Colors (white, red, orange and green) plus blinking to indicate turning and other warnings; beeping to indicate backing up, etc. [NOTE: Amazon didn't exhibit their warehouse systems and services at either show.]

Below is a list of some of those mobile platform providers (and a few that didn't exhibit at either show). There were many other AGV, lift and mobile manipulator providers exhibiting at the two shows which may be profiled in a future article.

What about the Chinese?

This news video shows hundreds of orange robots from Chinese company Hanzhou Hikrobot Technology sorting packages at a mailing center. Although they weren't present at either of the two shows in Chicago, they are selling their mobile flipper robots all over China.