Two mobile robots independently transport goods internally in the Austrian location of Flex, one of the worlds leading technology companies. The automation of these monotonous tasks keeps processes lean, efficient and flexible and takes the strain off the employees and enables them to devote more time to more important activities.

At Flex's Austrian location in Althofen/Kärnten, companies from the fields of medical technology, industry and automotive technology can outsource virtually their complete value-creation chain - from product design to manufacturing, engineering and logistics. In order to meet customer requirements and at the same time remain profitable, the 'Lean Six Sigma' approach is deeply anchored in the company's philosophy. The primary aim of this management method is the lean and efficient design of the value-creation chain. 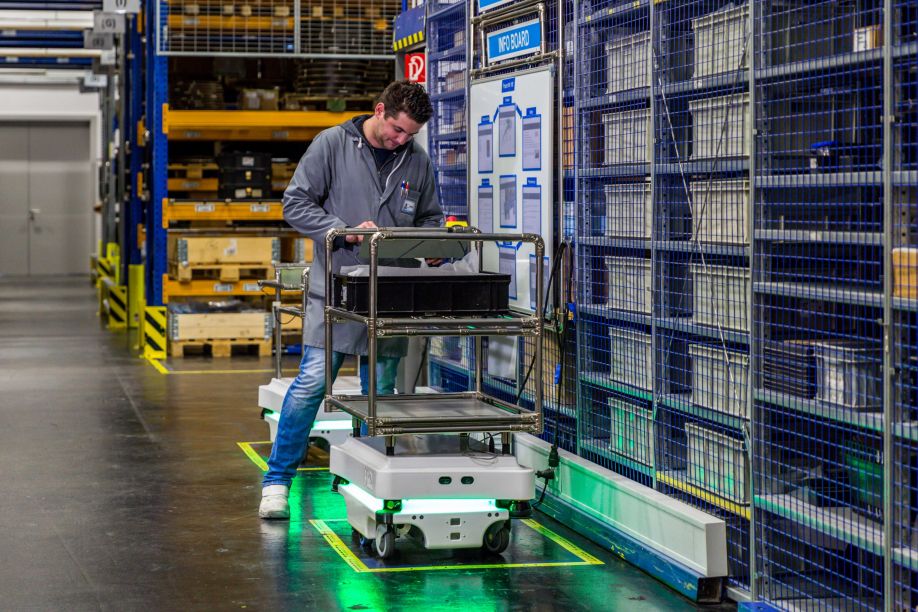 "Our production is very flexible, and this of course entails particular challenges for internal goods transportation as well. For instance, we often find ourselves in the situation that numerous transportation runs occur in a very short space of time from the main warehouse to the manufacturing area. In this connection, it is of course very important to reduce the travelling time as much as possible", says Christoph Schaller, Director of Engineering at Flex.  About a year and a half ago, discussions began regarding how the unnecessary travelling time could be reduced. But the idea of a transportation system with magnetic strips was rejected relatively quickly. The company‘s production layout generally changes every three to six months and, according to Schaller, installing a new magnetic strip every time there was a production layout change would mean considerable additional expenditure. "At the 2015 Hannover Trade Fair, we became aware of the mobile robots offered by Mobile Industrial Robots. After examining this system, we concluded that we had found a product that could meet our highly flexible requirements in terms of intralogistics and yet was very affordable." In the same year, 2015, the first of the two MiR100 robots was finally purchased, with the second following just six months later.

Thanks to the mobile goods transportation helpers at Flex, there is now a fully automated 600-metre stretch running without interruption from the main warehouse to the production area, with the load weight of the robot up to 100 kilograms. There are certainly some obstacles to the robots on this stretch, in the shape of high-speed interior doors for example. "But on a day-to-day basis these aren't a problem. The communication system in the MiR100 is connected to the doors and tells them when they need to open. This is working very well," says a confident Christoph Schaller.

Work time is more productive thanks to mobile robots

The automation of internal goods transportation has already paid off for employees. Thanks to the new technology, they have largely been freed from monotonous transportation tasks. The resulting increase in time available has enabled them to focus more on the area of logistics. In this way, substantial process optimisations have been achieved, as Christoph Schaller explains: "Transporting goods from A to B is now carried out by robots, and the activities of the employees have therefore increasingly shifted to goods receipt. For this reason, there is now much more time available in the main warehouse for pre-portioning of the goods deliveries to the production facility, likewise for the filling of fixed locations. As a result, the portionings are now much more equitable, which ultimately benefits the employees at all stages of our production chain.

The use so far of the two MiR100 robots has proved a very positive experience. In the medium term, however, the potential of mobile robotics will be even more fully exploited. Its scope of activities in the company will be gradually expanded – and to this end, will now also use the patented MiRHook system from Mobile Industrial Robots. This new product component can be connected directly to the MiR100 and will enable the fully automated transportation of carts weighing up to 300 kilograms. "The first step was the use of robots for transporting goods from the main warehouse," explains Christoph Schaller. "When we saw that working perfectly, we asked ourselves: what other possibilities does this technology offer for us? And of course, the possibilities are even further extended by the Hook system, with the system also becoming more flexible to use as a result. The next logical step for us is to use the robots in combination with the Hook system for the transportation of finished goods to the dispatch department."

About Flex
Flex is a world-leading technology company with more than 200,000 employees in 30 countries that manufactures intelligent products for a networked world. Flex supports its customers from the initial idea through to the delivery of the finished product.