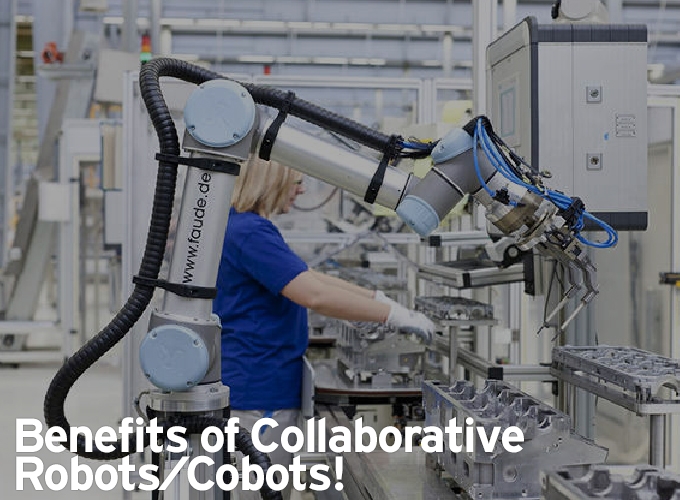 Alongside modern industrial automation, terms like ‘Cobot’ are showing up in the web space more than ever. You might be wondering, “What are cobots?”, So let me give you a brief description and  a little history first. Robots have replaced human labor in risky and crucial factory jobs since the industrial revolution but they operated within safety measures. Cobots, or Collaborative robots, take away some of the environmental, and spatial,  dangers traditional robots may cause, allowing them to work alongside humans. Their interaction with humans is more natural, they share the same workspace, and Cobots are very easily reprogrammed.

Although Cobots have only been commercially available for about a decade, they were actually invented back in the 90s. General Motors funded research grants to make robots work in collaboration with humans as helping hands between 1994 and 1995. In 1996, two professors at Northwestern University J. Edward Colgate and Michael Peshkin invented Cobots. General Motors came up with an alternative term Intelligent Assist Device (IAD), although in reality, the term ‘Cobot’, or 'Collaborative Robot' was more accepted. A draft of IAD/Cobot safety standards and procedures was prepared in 2002, updated later in 2016.

What benefits can Cobots offer?

Business in the 21st century is highly competitive and falling behind the competitors may cause irrecoverable disasters to a company. Collaborative robots can offer higher efficiency to industries as well as many other benefits.

Here’s a list of 5 benefits Cobots offer, right out of the box.

In the near future, collaborative robots will play major roles in the next industrial revolution. There is one downside though – a lot of unskilled labor jobs could be rendered useless overnight. However, new jobs will open up. With some retraining and adaptation to the new positions, we should not see a significant loss of industrial jobs due to cobots.