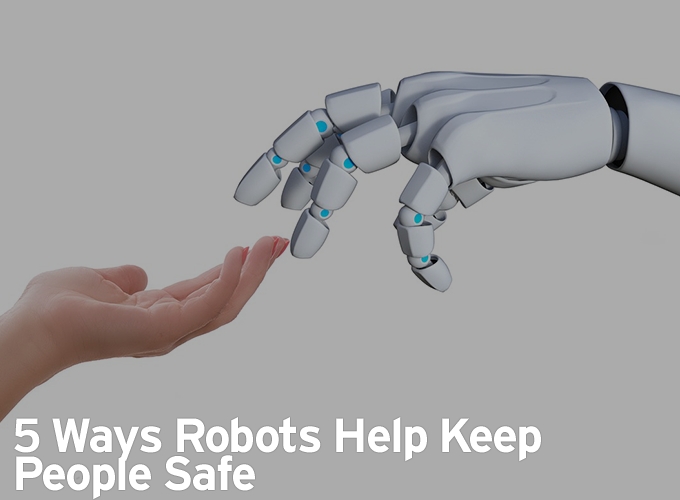 Contrary to sci-fi tales of robots taking over, there’s an abundance of ways that robots help keep people safe. Across a variety of industries, robots are minimizing the chances of injury and death at worksites.

Exploring the deep ocean can be exhilarating, though it can also prove extremely dangerous. From lethal sea predators to the prospect of pressure sickness, the task of exploring deep underwater is a dangerous one for humans. As a result, undersea exploration robots provide a better prospect.

In addition to these robots capturing high-quality footage and data deep below, they’re built to withstand the lack of oxygen and pressure issues that one will encounter as they travel deep. Institutions like Stanford are already working on robots for purposes of deep sea exploration, as is NASA when exploring deep sea and ice structures.

Speaking of NASA and space exploration, robots are a logical solution to exploring deep space and areas of the universe that aren’t practical for human exploration. Whether the obstacles involve sheer distance, a climate unfit for humans or both, robots don’t have to worry. Long waits and unfit atmospheres aren’t as much a problem for them. The worst case scenario is that the robot will cease to function — a much better prospect than the loss of human life.

NASA is working on humanoid-like robots that can collect and recover samples, with robotic hands that enable the ability to attach to items and pick them up. In the unknowns of space, using robots for exploration and research makes sense.

Human welders must deal with a variety of potential dangers while welding, including toxic fumes, heat and noise. Using robots to aid with welding can help prevent burns and hearing loss that welders often experience from even a single moment of inattention.

Robots with welding capabilities in their design are consistent and entirely attentive, with their material also immune to higher temperatures. For a dangerous job like welding, robotics is playing a big role and will continue to do so in the future.

Certain jobs require people to do work at a remote location, without anyone available to aid their work or help in case of an emergency. A variety of occupations require working alone, including truck driving, carpentry, assembling, janitorial jobs and construction.

As some of the most common fatal causes of workplace injury are transportation accidents, falls and slips, robots can play a life-saving role in assisting these lone workers, both with the job at hand and as a source for help in case of emergency. Specialized robots can aid in certain tasks to minimize the chance of injury. Also, if an injury happens to occur, they can automatically notify medical experts for prompt care.

Car manufacturers are using robots to test materials for how much wear and tear they can endure. For example, Ford uses a mechanical buttock called the Robutt to test their car seats in a variety of situations. The robotic tool helps Ford cover its seat with a pressure sensitive mat and test the longevity of a car seat.

The test works by deploying the Robutt on the end of a robotic arm, which repeatedly sits on a prototype chair. With this test, Ford recreates a decade in just three works and can effectively test the wear and tear of materials. Comparative to having humans conduct tests like this, which can result in repetitive strain injuries or worse, robots are much more fit for stress testing in manufacturing.

Across a variety of industries, robots are helping to keep people out of harm’s way while enhancing research and testing. Who’s to say what they’ll be helping with next?