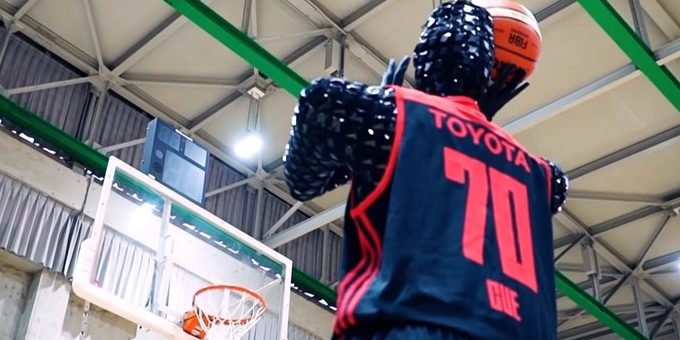 The Next NBA Star Could Be a Robot

Automation has replaced assembly-line workers, cashiers, projectionists and receptionists. Every day, more and more entry-level positions are being delegated to robotic counterparts as companies continue to invest in machines. So how far does this trend extend?

The answer is — all the way to the basketball court.

Its performance speaks for itself. Pitted against Japanese pro basketball players, CUE managed to sink every single one of his 10 free-throw shots while his competition managed eight. For comparison, the top basketball players in the league average about 65 percent accuracy in their shooting. That's a significant margin.

Even more impressive, CUE trained its learning database by taking 200,000 shots. By processing the information it acquired in that span of time, the malleable nature of the robot's coding allowed it to adapt and improve its technique to an inhumanely precise degree. And it's only getting smarter.

CUE will never play in a professional game. Though its model represents an incredible leap forward in robotics and software engineering, its stationary design forbids it from dribbling, ducking, running or dunking. Even if it could, the costliness of potential repairs would likely keep its creators hesitant to try.

The Toyota Engineering Society (TES) has put a lot of love and hard work into their brainchild. These 17 Toyota employees volunteered their free time with the goal of reproducing the lead protagonist of "Slam Dunk," a popular sports manga. Incredibly enough, none of the TES had any experience in building or programming.

All the TES required was their determination and access to the internet. Online guides on AI coding helped them to structure the inner workings of CUE, and little by little, their creation came together. Toyota now sponsors their project, proudly dressing it in a branded jersey.

Other Uses for This Technology

AI robots with the capability to learn have different utilities. Machines that develop coordination can serve on battlefields where a wounded soldier caught in a crossfire needs rescuing. We may also see individual robots that act as separate entities but exchange items and cooperate to perform tasks.

Surgeons already use robotic appendages to aid in surgery. Imbuing these appendages with a certain level of autonomy — supported by hundreds of hours of testing and practice — could free a medical professional to operate at lower risk. There's no chance of exhaustion or incompetence.

The realm of entertainment will likely see a higher demand for robots as technology progresses and production costs fall. Though one robot against a team of human contenders doesn't seem fair, teams of robots competing against each other is not a far cry from several of today's televised programs.

In a non-physical context, an AI supercomputer like IBM's Watson has the capacity to answer questions nearly instantaneously. Its foundation in analytics allows it to organize and process data at incredible rates, offering business insights that inform decision-making. The service is also available to those who work in healthcare.

What CUE Means for the Future

CUE is proof that robotics is growing in not only popularity but also accessibility. TES showed that anyone with an internet connection, a committed group of like-minded friends and a dream could create something truly game-changing.

Will the next NBA star be a robot? Will America see an android go head-to-head with Lebron James on the court next year? At the rate technology is progressing, it would be best not to speak too soon.