Funded by a five-year, $3.5 million NIH grant, the academic-industry partnership aims to develop an MRI-compatible robotic technology to provide minimally invasive brain tumor therapy that is ready for clinical trials. 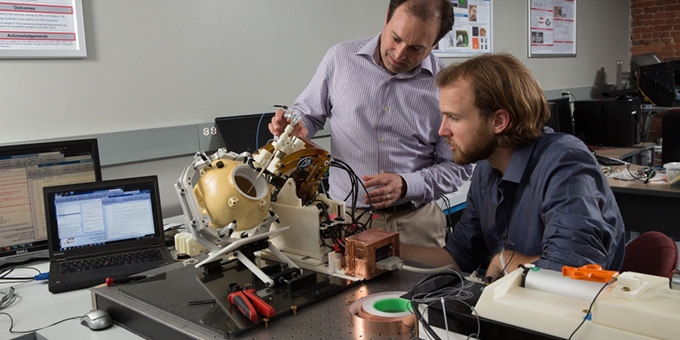 Researchers at Worcester Polytechnic Institute (WPI) and Albany Medical College, along with corporate partners GE Global Research and Acoustic MedSystems Inc., have received a five-year, $3.5 million award from the National Institutes of Health (NIH) through the National Cancer Institutes’ (NCI) Academic-Industrial Partnership program, to continue development of an innovative robotic system that, operating within an MRI scanner, can deliver a minimally invasive probe into the brain to destroy metastatic brain tumors with high-intensity therapeutic ultrasound under real-time guidance.

The grant, the second major NIH award for the system’s development, will enable the research team to model the behavior of the ultrasound ablation system, implement thermal monitoring to provide real-time feedback on dose delivery, optimize and verify the effectiveness of the system, and certify its readiness for human clinical trials. The research team is led by principal investigators Gregory S. Fischer, PhD, associate professor of mechanical engineering and robotics engineering at WPI and director of the Automation and Interventional Medicine Laboratory, and Julie G. Pilitsis, MD, PhD, chair of the Department of Neuroscience and Experimental Therapeutics and professor of neurosurgery at Albany Medical College.

Fischer and Pilitsis will work closely with the two corporate partners. Acoustic MedSystems in Savoy, Ill., will design, build, and validate the needle-based therapeutic ultrasound (NBTU) probe and provide the software to visualize and control it. GE Global Research Center in Niskayuna, N.Y., will implement thermal imaging capabilities to monitor, in real time, the ablation of tumor tissue, and will collaborate on integrating the robotic system with its clinical MRI scanner.

Brain metastases, which are among the most common type of brain tumors, occur when primary cancers in other organs spread to the brain. About 170,000 new cases are diagnosed each year in North America. Currently, the only treatment options are chemotherapy, radiation, and surgery, all of which have limited success and can harm unaffected brain tissue; in addition, surgery is possible only when tumors are in accessible locations.

The system being developed with the NIH award takes a different approach to treatment. It uses a thin (2 mm in diameter) probe that can be inserted into the brain through a small hole drilled in the skull and placed within the tumor. By adjusting the probe’s orientation and power output, doctors will be able to deliver doses of high-intensity ultrasound energy that are lethal to tumors, while minimizing damage to surrounding brain tissue. High-intensity ultrasound energy kills tissue by heating it (called thermal ablation), making it possible to use an MRI scanner’s ability to detect thermal emissions to monitor the dose delivered to the tumor.

“Thermal ablation has shown potential as an effective treatment,” Pilitsis said, “but the available devices for using this therapy have severe limitations and can’t treat all shapes, sizes, and locations of tumors. Our hope is that this integrated robotic system will one day be able to provide all brain tumor patients with a safer, more accurate treatment.”

The probe will be inserted into the brain with a robotic system developed by a WPI research team led by Fischer. The core of the system is a robot capable of operating inside an MRI scanner. It will position and align the probe before it is inserted into the brain and then adjust its depth and rotate it during the procedure to conform to the shape of the tumor. To ensure that the probe is precisely targeted at the tumor, the robot’s alignment must be based on real-time MRI scans, rather than pre-operative images, since the brain can shift as the patent is being prepared for the surgery. Real-time scans are also needed to verify the position of the probe in the brain, while live MRI-based thermal imaging will be used to monitor and provide feedback on the effects of the ultrasound ablation.

“Our system is designed to provide very precise, closed-loop control,” Fischer said. “We will use live MRI images and thermal imaging to control the pattern of the ablation and monitor and adjust it in real-time to confine the thermal effects to the area within the tumor boundaries and to ensure that we are maximizing the odds that we are removing the entire tumor, while minimizing the chances of damaging non-malignant tissue.”

Since this control depends on live images, the WPI robot has been carefully designed to work within the tight confines of the MRI scanner and to operate effectively despite the presence of other technology, including anesthesia equipment, imaging coils, and patient monitoring apparatus.

In addition, because MRI scanners use a powerful magnet, the robot must be made without ferrous metals. It will be constructed mainly from plastics and ceramics and will use innovative piezoelectric motors and custom motion-control electronics that generate very low levels of electrical noise to avoid interfering with the MRI imaging system. In addition, the robot must be designed so that any parts that come in contact with the patient can be sterilized and so that the system can operate reliably and safely within a surgical environment.

In addition to the robot, the WPI team, which includes PhD candidates Paulo Carvalho and Katie Gandomi and research scientist Christopher Nycz, PhD, is also developing a modular controller to operate the robot and will work to integrate the robotic system with multiple other systems, including the MRI scanner, the software that controls the Acoustic MedSystems probe, and 3D navigation software. Fischer said the goal is to deliver a system that can be easily integrated into the work flow inside a surgical suite. “When we get to clinical trials we won’t be able to have an army of engineers on site,” he said. “So we need to get to the point where everything runs very, very smoothly.”

Some of this work will be conducted at WPI’s PracticePoint R&D facility for medical cyberphysical systems, a membership-based research, development, and commercialization alliance founded to advance healthcare technologies. Now under construction at WPI’s Gateway Park campus, PracticePoint, which in 2017 received a $5 million matching grant from the Massachusetts Baker-Polito Administration and the Massachusetts Technology Collaborative, will have point-of-practice clinical case scenarios—a hybrid operating room, a medical imaging suite, a reconfigurable patient care suite, a rehabilitation lab, and a residential setting—where smart medical devices and systems can be researched, developed, and tested. The surgical imaging suite will include a 3-Tesla MRI scanner made by GE Healthcare, a core industry partner in PracticePoint.

“We will be leveraging the facilities at PracticePoint to do a lot of our system testing, MRI compatibility validation, and system integration,” Fischer said. “Having the ability to conduct this work here in Worcester, using a scanner comparable to the technology in which our pre-clinical studies will be conducted, will be a huge advantage.”

The robotic system being developed with the current NIH award is an evolution of a system designed and tested by the WPI-Albany Medical College team with an earlier five-year, $3 million award from the agency. “In the first phase of the project, we developed a proof-of-concept system and demonstrated that it worked as expected,” Fischer said. “With the new award, we can optimize and fully characterize the system, verify it with pre-clinical studies, and get it ready for clinical use.”

While their current focus is delivering a system for treating brain tumors with ultrasound ablation, Fischer said the research team is also considering other applications for their technology. “We are creating a versatile stereotactic neurosurgery delivery device,” he said, “one with much broader potential applications. For example, we could use it to deliver other ablation technologies, to do biopsies, to do electrode placement for deep-brain stimulation, and even to deliver therapeutics such as gene therapy. This research has opened up a world of exciting possibilities.”

About PracticePoint
PracticePoint is an agile and scalable collaborative research facility enabling public and private universities, research institutions, industry and innovators to work collaboratively to develop and incorporate cyber-physical systems (CPS) into medical devices and equipment. These new products and systems will improve performance, security, accuracy, timeliness, costs, and outcomes in human healthcare.

About Worcester Polytechnic Institute
WPI, a global leader in project-based learning, is a distinctive, top-tier technological university founded in 1865 on the principle that students learn most effectively by applying the theory learned in the classroom to the practice of solving real-world problems.

About Albany Medical Center
Albany Medical Center, northeastern New York’s only academic health sciences center, is one of the largest private employers in the Capital Region. It incorporates the 734-bed Albany Medical Center Hospital, which offers the widest range of medical and surgical services in the region, and the Albany Medical College, which trains the next generation of doctors, scientists and other healthcare professionals, and also includes a biomedical research enterprise and the region’s largest physicians practice with more than 450 doctors.