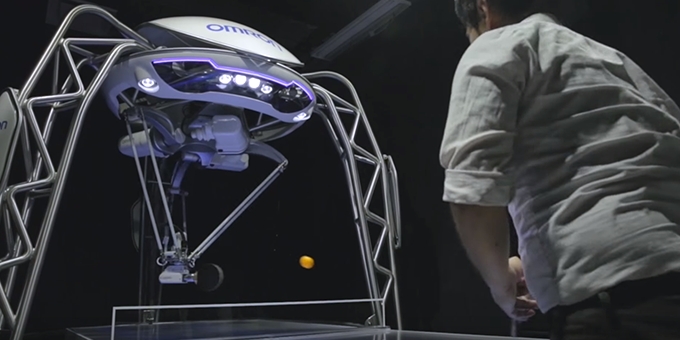 1. A Helping 'Hand' for Colonoscopies

Nothing about colonoscopies is pleasant except a clean bill of health at the end. Since many patients can't see past the physical discomfort and unwanted intimacy with a stranger, Mark Rentschler and researchers at the University of Colorado, Boulder, want to improve both aspects of this dreaded but essential medical procedure — with robots.

Rentschler's team proposes we replace "traditional" colonoscopes with robots to simulate the movement of peristalsis. This is the muscular locomotion that makes our bowels work in the first place. These "soft robots" gently push themselves along while providing video footage to doctors, and easily conform to the body's shapes to minimize discomfort. The flow of cooling air is probably appreciated, too.

There's work to do before the robot is ready for hospitals. The immediate goals are to miniaturize the technology further and reduce the time required for a colonoscopy from 30 minutes down to 20.

2. A Deterrent Against Homeless People

This example is a little less "strange" and a little more "tragic," but it makes our list nonetheless. Back in 2017, San Francisco's Society for the Prevention of Cruelty to Animals (SPCA) deployed a robot patrolman to scare homeless people away from the building and deal with "car break-ins and crime that seemed to emanate from nearby tent encampments."

The robot is a model "K5" from Knightscope. Its shape resembles a Dalek that got a makeover from Apple. Not surprisingly, it earned scathing rebukes from citizens of San Francisco and from the city itself. Some on social media encouraged the public to vandalize the 'bot if they come across it. Many obliged.

The SPCA rented the robot — and its suite of cameras — for $6 per hour in lieu of a security guard. It's possible the K5 has a conscience even if its masters don't, however — one stationed in D.C. committed apparent suicide by rolling itself into a fountain.

Some proposed uses for robots are more heartwarming than others. Take Omron's robotic table tennis master, which they call "Forpheus." Other robots like TrainerBot can pitch balls, but Forpheus is billed as the next step for the "harmony of humans and machines" in sport.

A motion controller instructs the five-axis motor and arm to respond to human ping pong partners with accuracy down to the tenth of a millimeter. One set of cameras tracks the ball while another studies the human player to provide feedback on their form.

Why "heartwarming"? It's because Omron sees this robot as a way for humans to bond over a shared love of the game. A touching advertisement shows a father brushing up on his skills with the 'bot's help to get closer to his daughter.

4. An Automaton for Lottery Ticket Sales

As of 2017, Shanghai had more than 2,600 shops licensed to sell lottery tickets. Until recently, most tickets were sold by human beings. Like the rest of us, you've probably wondered if there's a better way?

By "intelligent," he means "robots." Many in the U.S. use lottery apps to take part in prize drawings, but Shanghai plans to take things further by deploying robotic ticket sales kiosks. The program is in a trial run currently, but soon residents will see these kiosks in public spaces like metro stations, airports, department stores and cafes.

In addition to accepting popular mobile payments, these robotic kiosks will also instruct customers on how to play the games. As with U.S. lotteries, the Shanghai lottery supports public services — including orphan and elderly care and other social programs.

Submitted here, as proof that humanity would rather create new problems to solve than solve any real ones, is "Sally" — a $30,000 robot which does some of the work of assembling salads. We say "some of the work" because Sally is a glorified vending machine. Humans still have to cut up all of the salad fixings and load them into the machine. Sally is merely the salad tosser — all 350 pounds of her.

The company responsible, Chowbotics, claims the machine is more hygienic and convenient than human chefs. But, as mentioned, there's still a lot of prep work before she gets her hands on your salad. As for convenience? That's a more plausible claim. The machine was designed with offices and supermarkets in mind. There's no household version yet, but the company says a miniaturized version is in the pipeline.

The burning question is how well Sally handles avocado — and the answer is "not well." She does better with more robust veggies and fruits. Chowbotics says Sally can use 21 different ingredients to craft many varieties of salads while customers wait — but evidently "Cobb" isn't one of them.

6. An Exercise in Form Over Function

Capping off our list is the Method-2 — a 13-foot-tall pilotable robotic "mech." By all accounts, it has the upper body strength of a third-grader and the surefootedness of an octogenarian on a skateboard. Nevertheless, Jeff Bezos looked positively delighted as he "piloted" the mech at the MARS Conference. Mind you, the robot dangled from support chains to prevent it from tipping over (which looked fairly likely).

The strangeness of this example isn't because of any lack of ambition, but because the 'bots designers have so obviously put form over function. They literally hired a Hollywood and video game designer to inform the design of the robot, even while competing robotics companies like Boston Dynamics continue developing functional robots with seemingly little regard to outside appearances.

The Future of Robotics

As you can see, some of these designs have great potential while others are solutions in search of a problem. No matter what, it's clear the future of robotics won't leave us wanting for entertainment.