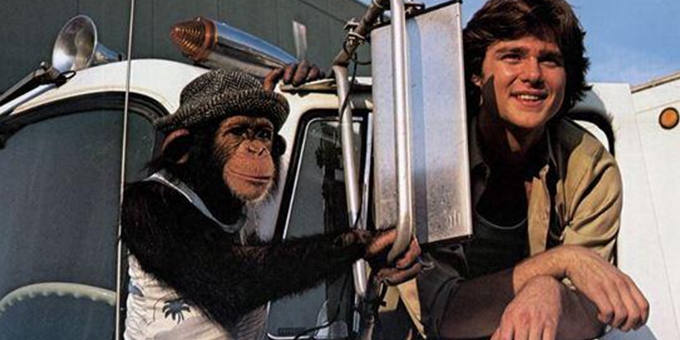 “I don't care what they say about you man, I just still think you're the best companion a guy could have on the road... Almost.” – BJ McKay, “B.J. and the Bear,” Glen A. Larson Productions, 1978

One of the events we make certain we block out time for at CES is IDC’s annual Analyst Briefing.  It’s the best tech overview/snapshot you’ll find at the “we will change the world” event.

While Tom Mainelli, devices and AR/VR VP/program manager, gave us some inputs before the presentations regarding the state of products/companies (more in the future); the discussion shifted to autonomous vehicles, which were everywhere at the show.

One of the ladies at our table quickly corrected us when we ventured that autonomous was a slow work in progress until probably 2025.  She quickly said, “You obviously haven’t looked at the backbone of business everywhere … trucking.”

She was right; it’s been awhile.

After all, trucking is deeply woven into every nation’s fabric.

The industry moves about two-thirds of all goods shipped in and out of every country around the globe.

In the U.S., truck driving is the primary occupation in more than half of country.

Everyone should pay more attention to trucking than we probably do (unless we’re in corporate logistics) because e-commerce may be rising at a steady rate and products have to quickly (instantly?) get from the warehouse to the doorstep.

Face it, drones can only do so much, no matter what Bezos says.

This past year, 12-15 percent of all purchases were made by folks sitting in their underwear or pajamas; and every retail analyst projects it will only increase.

Trust us, the stuff doesn’t download from the internet.

A combination of long-haul and local trucks deliver it.

According to Deloitte, the global industry will see an increase in the number of large fleets – long-haul and urban delivery.

One of the biggest challenges is that the industry is deeply traditional.

There have been few major or structural changes in the preceding decades and a new breed of alternative drive systems will be required to keep the economy growing.

Every time someone brings up self-driving trucks, union officials and others like to slam on the brakes, saying it will mean the loss of millions of jobs.

While some jobs will disappear, most will change; and new human-involved requirements will emerge. 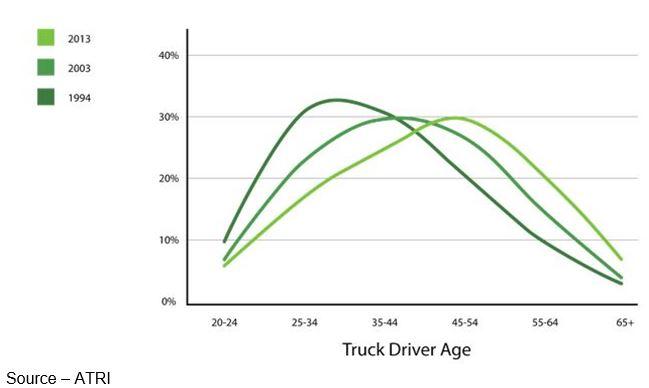 Love Fades – When the CB was “in,” everyone listened to “good buddies” chatting on the open road and thought about how great it must be to drive big rigs across the country.  But the CB got old and so did the drivers and the industry is faced with the need to attract the younger crowds.

Commerce in every corner of the globe would stall if it weren’t for trucks, but there are a couple of problems:

And according to the ATRI (American Transportation Research Institute), the age has steadily increased. 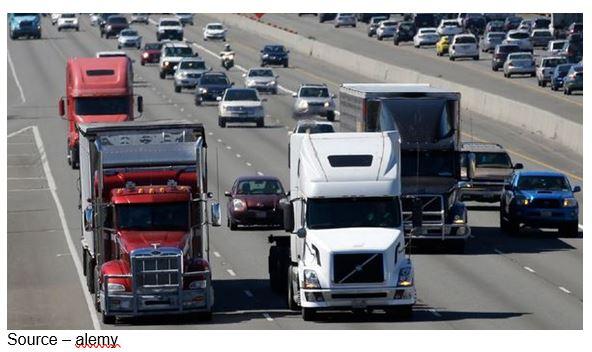 Intimidating – While folks in their lowly cars are usually concerned/cautious about trucks they encounter on the highways and byways; the truth is the professional driver is more concerned about what the dude/dudette in the auto will do when they are distracted or impaired.

There’s are good reasons for this:

According to the ATA (American Trucking Association) and based on the current driver population just in the US, more than 400,000 drivers will retire even as freight demand will increase 37 percent.

Companies are competing for the best drivers as a shortage of truckers persists.

"This wage increase reflects the importance of our private fleet and our commitment to recruiting and retaining the best drivers in the industry," said Greg Smith, executive vice president of Walmart's U.S. supply chain.

The trucking association projects that IF nothing changed, they would need 900,000 new drivers within five years to meet the demands for goods/services movement. 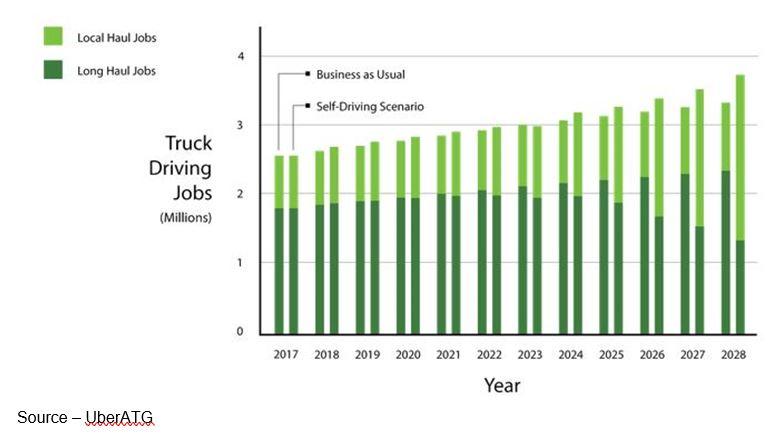 Open Jobs – Industry analysts project that with the introduction of self-driving trucks there will be an increase in truck driving jobs because business will keep rolling.

And it’s the same issue around the globe!

To meet the demands, the industry is trying to make the job more appealing and more accessible to attract younger men/women.

New approaches include things like well-paid contracts, referral bonuses, long-term career prospects, more varied work’; and whenever possible, schedules that get home in the evening.

The industry is on the cusp of technology change to keep pace with demands. 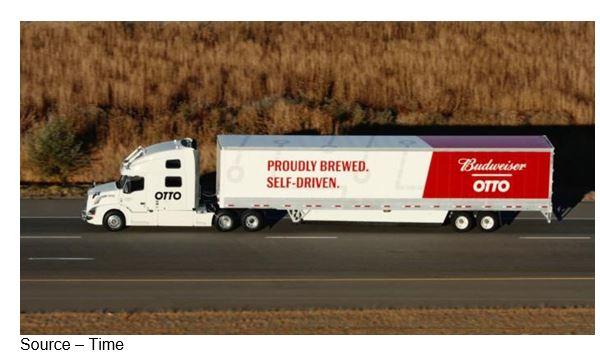 Beer Run – One of the earliest – and most widely publicized – implementations of autonomous trucks was between Otto and Budweiser that delivered a truckload of beer without a driver behind the wheel (but in the cab).

Alliances are in place to operate ATs (automated trucks). 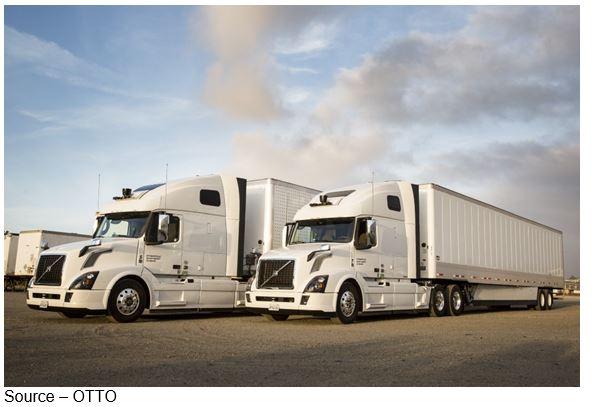 Tests Begin – A growing array of autonomous trucks are being developed to meet the demand for new systems and equipment to move products; and increasingly, without human intervention.

The rigs are typically new medium- and heavy-duty trucks, outfitted with lidars, sensors, and other technology to allow the vehicle to operate without human intervention but with a driver present.

Full autonomy is a long way off, coming in four waves of introduction, testing, refinement and implementation. Each wave will lower operators’ total cost of ownership (TCO)—a little at first, and then a lot. 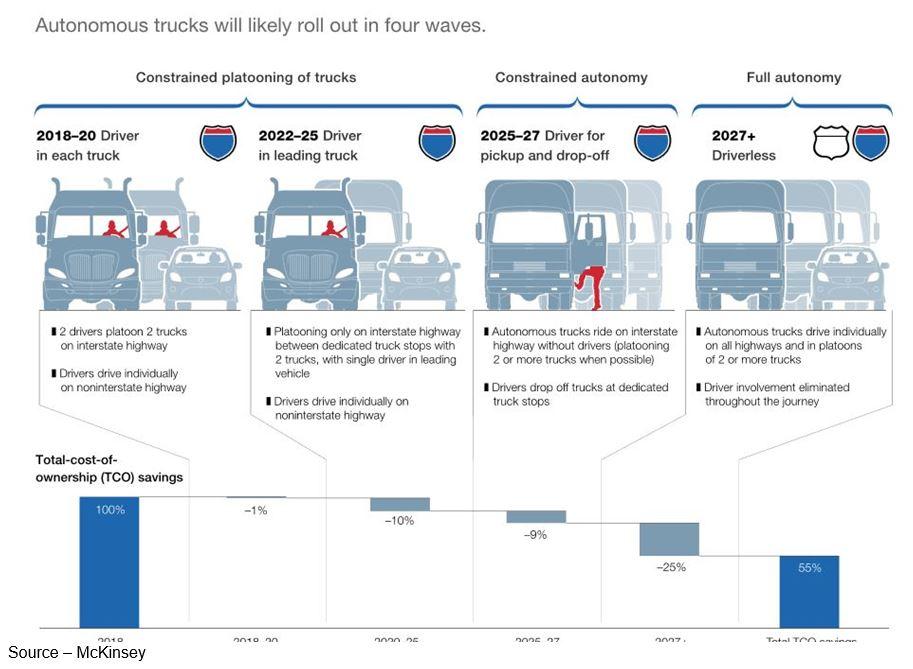 Phased Introduction – Fully autonomous trucks won’t be sharing the road with you soon.  The industry and governmental agencies see the implementation coming in stages as technology improves and favorable results are achieved with each passing mile.

Every wave or phase of self-driving trucks will need partners to cover local routes and bring loads to and from transfer hubs.

Hence, the growth for self-driving trucks will also mean a growth in the need for truck drivers.

Local haul truckers will pick up/drop off loaded trailers and drivers who prefer long hauls will continue to have their choice of routes crisscrossing the country. 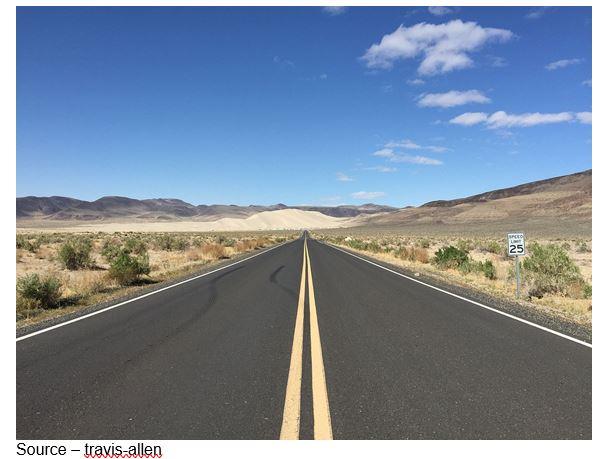 Open Road – Licensed drivers – male/female – will be able to schedule their driving duties in a way that best meets their personal desires and family/life commitments.  There are still people who get a kick out of being on the open road hauling goods cross the state and cross-country.

In addition, goods will be moved less expensively and will arrive faster.

The first waves, which are already being used in Europe, China and targeted areas of North America, are “platooning,” a technique to connect wirelessly a convoy of trucks to a lead truck.

This allows them to operate safely while much closer together, producing greater fuel efficiency.

The 1st phase (SAE Level 3 autonomy) has a driver in each truck to monitor systems, the road and surrounding “activity.” 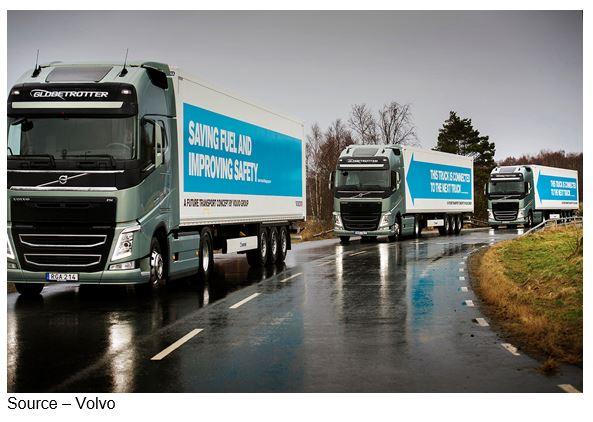 Platooning – During the early phases of self-driving trucks, the first implementation has been platooning with a driver involved in the lead truck and other trucks processing information to keep distances and save fuel.  Active platooning tests are being conducted today around the world.

Wave 2 platoons for long hauls will feature a driver in the lead truck with unmanned trucks following close behind.  Drivers will take control when they leave the highway and near their warehouse hub.

Depending on technical and performance progress, the 3rd wave will be unmanned trucks operating across the highway system, depending on weather/visibility conditions and infrastructure progress.

Drivers will meet the trucks at predetermined locations and will drive them to the final destination, handling the most sensitive tasks - navigating city streets, local and pedestrian traffic, parking lots, and loading docks.

In the very distant future, fully autonomous trucks without drivers will be commonplace--from loading to delivery.

Don’t worry though, you will probably not be around to see autonomous fleets displace the nonautonomous trucks. 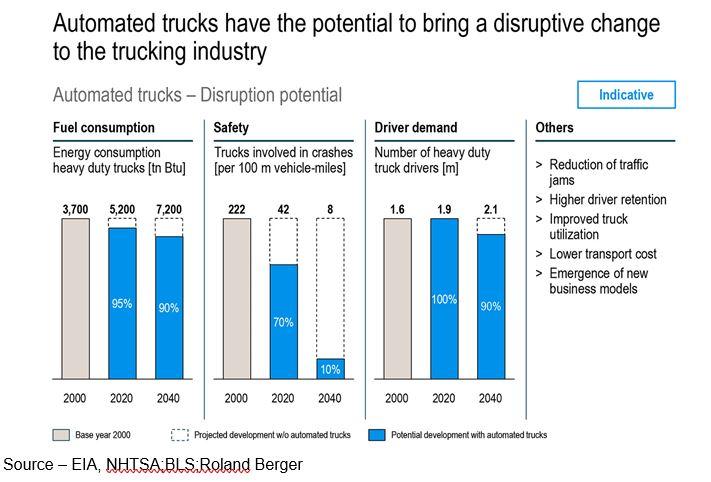 Trucking Disruption – Tomorrow’s fully automated trucks will be able to be on the road more than they are today (earning firms/individuals money) while saving fuel and reducing accidents, so the overall cost of moving goods could be significantly reduced.

More importantly, each self-driving truck will do the work of two of today’s trucks operating at all hours - day/night - producing efficiencies and savings similar to those enjoyed by the commercial air industry.

But this will improve with each mile driven.

Most nations’ highway infrastructure is in need of repair and expansion.

Near any major city, you’ll experience clogged roads at almost any hour.  Self-driving trucks will reduce congestion by traveling closer together and will be used more effectively by optimizing load/mile ratios and eliminating deadheading (empty trucks going  to next pick up location).

Trucks carry more freight than all other modes of transportation—including rail, pipeline, water, and air—combined.

That same year, 3.7M heavy-duty trucks were in operation, employing about 1.8M drivers.

It may seem to be counterintuitive; but  the demand for trained, skilled truckers will continue to climb, even as more driverless trucks take to the road.

Companies and individuals will continue to buy products – components, parts, finished goods – and they have to be moved quickly, efficiently, safely and more quickly to keep pace with demand.

The new trucking  jobs will be a little less grueling, since they won’t have to worry about the idiots in the “smaller” vehicles sharing the road with them. 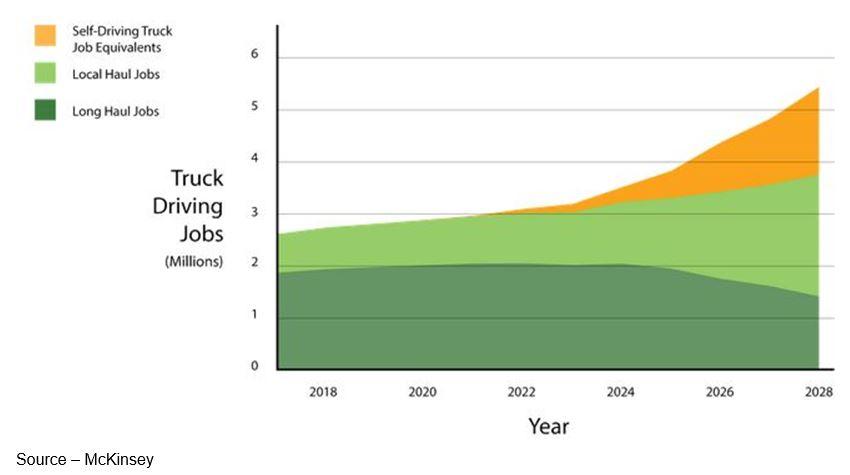 Drivers Wanted – Trucker jobs will shift and grow for local and long-haul work.  Because the self-driving truck doesn’t require as much downtime, they can be used more frequently, and the driver “crew” can be changed very similar to today’s airline industry.

So even though there may be no one behind the wheel of the big rig(s) that pass you, they will still have “Drivers Wanted” stickers on each of the trailers. 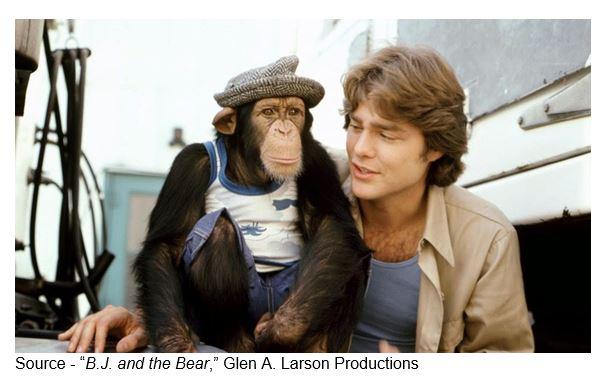 And with more than 3.5M drivers in the U.S. and a shortage of more  than 50,000 drivers today, men/women have a pretty good reason to be happy sitting beside the wheel while the person/machine keep businesses rolling.