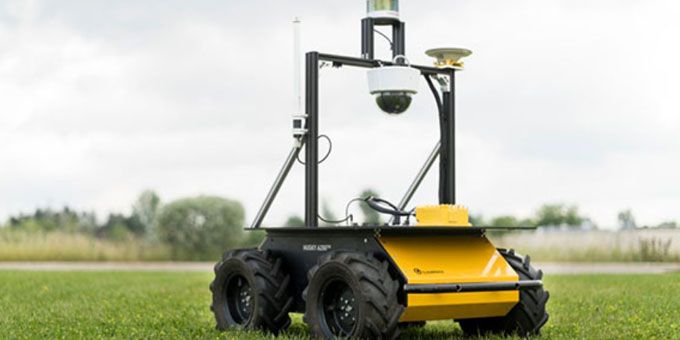 Please tell us a bit about LORD and your role in the robotics industry?

I manage a team developing IMU’s for positioning and navigation in applications such as robotics, drones and autonomous vehicles. MicroStrain, which LORD acquired in 2012, was an early innovator in IMUs using MEMS-based sensors. We released our first products in the early 2000’s and are currently working on our sixth and seventh generation.

What are some of the most important attributes to look for in an inertial sensor?

How do “real-world” environmental conditions affect the sensor selection?

The parameters of IMUs reported on spec sheets are typically reported under ideal conditions – on a granite tombstone in a lab setting with controlled environmental conditions. These specs do not match the performance in the field when you add in temperature variation, mechanical shock, and vibration. This is particularly true of surface-mounted IMUs, which are highly susceptible to induced thermal and mechanical stresses.

Bias stability of MEMs sensors can be quite good at a constant temperature, but often fluctuates when temperatures change. Temperature cycling also brings unpredictable behaviors such as bias and scale factor hysteresis, and even large step jumps. Every IMU that LORD ships is temperature compensated over the full usable range as reported in the accompanying calibration report. We do not charge extra for this.

Vibration is probably the hardest thing to compensate for, so choosing locations\mounts\etc. that provide a more stable mounting location will yield best results. That said, LORD works hard to mitigate the effects of noise through rigorous hardware selection and through software filtering algorithms embedded into every IMU we produce.

What should be focused on when evaluating spec sheets of competing products?

The specifications that most engineers gravitate to are drift rate and noise. Beyond the obvious specifications, one needs to pay attention to usable temperature range, non-linearities and hysteresis. These are non-compensable effects that can drastically affect the output.

Are there preferred methods of connectivity for inertial sensors? (APIs, ROS, CAN bus, etc.)

Standard means of offboarding data include industry standard hardware interfaces such as USB, RS232, RS485/422 and CAN bus.

Beyond the hardware interface, one needs to pay attention to the availability of API’s. When an engineering team is selecting an IMU, they are also choosing to take on whatever work is needed to make it work as advertised. With digital sensors this is more than powering it up and capturing data. Without a good API, a firmware engineer is forced to spend costly person-hours developing a software interface. When an IMU has a well-documented API, the integration effort is substantially less.

What is meant by interchangeable design and why should it be prioritized when selecting a sensor.

Interchangeable design allows a designer to tailor entire systems or elements of systems for the needs of a given task.

This is important as it allows financial and performance flexibility with minimal need for wholesale redesign of the system.

Our family of inertial sensors provides a wide selection of features, performance and packaging options that allow robot designers to start with a sensor that they think most closely matches what they need, but then gives them the flexibility to make adjustments without having to change software or mounting. Sometimes finding the right sensor requires iteration, and our family of sensors facilitates that process and makes sure that in the end you don’t pay for more than what you need.

Advancements in mass-produced cell phone and portable electronics have trickled down to other products such as IMUs, making them more powerful, but also smaller and more affordable.

Inclinometers used on industrial equipment have typically only employed accelerometers. By adding triaxial gyroscopes and advanced Kalman filter software, newer generation inclinometers such as our MV5-AR and ML5-AR provide more accurate positioning and less susceptibility to noise from vibration and shock. These units are also waterproof (they can even be pressure washed), can work with either regulated and unregulated power sources, and use either CAN bus J1939 and CANopen communication.

What are the benefits?

The latest generation inclinometers provide much more stable performance and higher accuracy. As robots and mobile industrial equipment move to higher levels of automation and autonomous operation, this improves the safety and operating performance in areas such as navigation and platform stabilization.

What types of applications can take advantage of these benefits?