Spot is a small four-legged robot that resembles—well, a dog. It might not fetch your slippers, but it is very versatile. It weighs about 66 pounds, about what a large dog weighs. 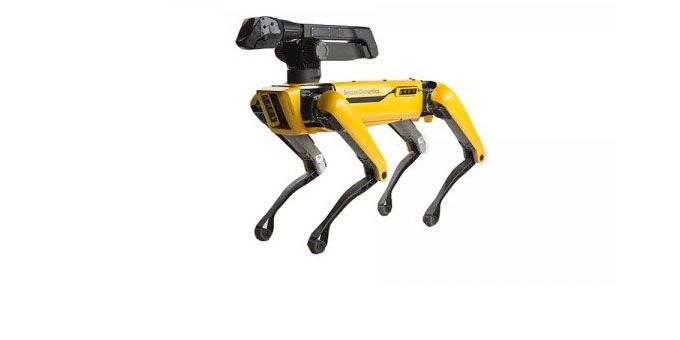 Here Spot! Fetch. No, I’m not calling my dog. Her name is Foxy. I’m talking about Boston Dynamics’ robot, Spot.  Spot is a small four-legged robot that resembles—well, a dog. It might not fetch your slippers, but it is very versatile. It weighs about 66 pounds, about what a large dog weighs. Spot is all-electric and can run for about 90 minutes on a charge, depending on what it is doing.

Spot inherited all of the flexibility of its big brother, Spot Classic, while being able to pick up and cope with objects using its 5 degree-of-freedom arm and perception sensors. The sensors include stereo cameras, depth cameras, an IMU, and position/force sensors in the limbs, all of which assist with navigation and manipulation. 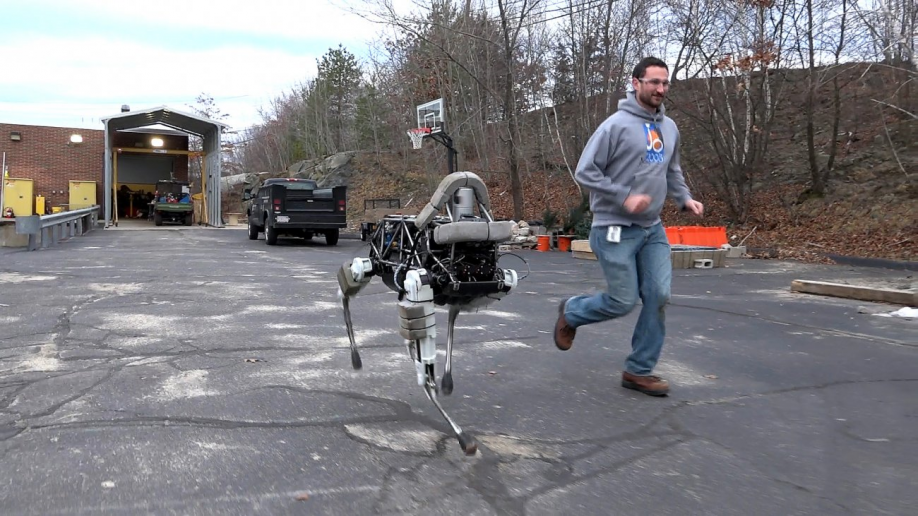 Spot Classic takes the experiences learned by Boston Dynamics while developing BigDog, Cheetah and LS3, and incorporates them into a quiet four-legged robotic dog with astonishing rough terrain mobility and super-dog strength. Spot Classic weighs 165 pounds, stands 37 inches high, with twelve joints. Spot Classic can handle a 100-pound payload. SpotMini is a slimmed down version of the Classic Spot. It stands 33 inches and can handle a payload of 31 pounds. It has 17 joints.

Boston Dynamics manufactures some of the most amazing robotic animals. The company spun off from MIT in 1992. The company created some very cutting-edge robots, especially those that replicate animal movements. Boston Dynamics is a leader, revealing robots that can sprint faster than Usain Bolt, considered to be the greatest sprinter of all time. They can leap onto buildings, and can outdo most gymnasts in the backflip. The company’s most well-known handiworks are canine stimulated robots. 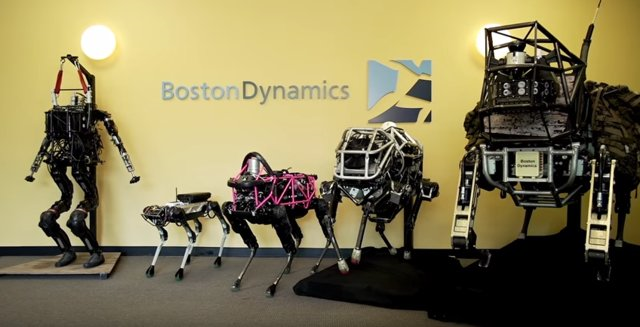 In 2005, Boston Dynamics introduced a 36” long, 30” wide, 240-pound robot called BigDog. BigDog was planned to be a pack mule for soldiers, as it is capable of carrying 340 pounds, and climb 35° inclines. LittleDog came next and was revealed as a scrappy chihuahua. It was the smallest four-legged robot in the Boston Dynamics’ product line. Powered by lithium polymer batteries, LittleDog could run for 30 minutes. It could be controlled remotely, and was capable of creeping across rocky terrain.

AlphaDog Proto came onto the scene in 2011. It was created for DARPA and the United States Marine Corps.  AlphaDog Proto was capable of carrying a 400-pound payload during a twenty-mile mission across various terrains. An internal combustion engine was used to quiet BigDog, making it appropriate for combat missions.

In 2013, BigDog had an intimidating new trick. Equipped with an arm, BigDog could pick up a 35-pound cinder block and throw it up to 17 feet behind it, hurling the rock like a drunken Olympian throwing a discus. Imagine BigDog clearing a path through rubble. 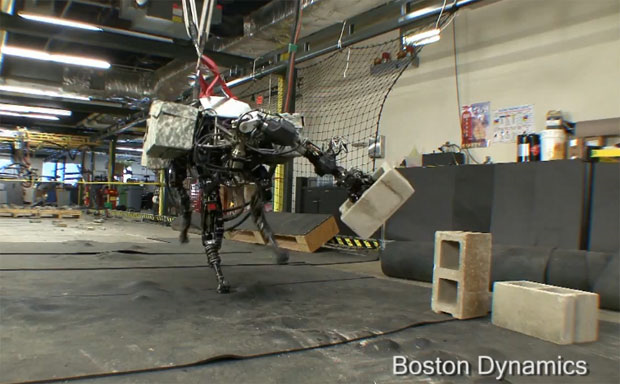 Spot Classic came along in 2015. It was an electrically driven, hydraulically activated robot. Spot was appreciably smaller than previous canine-inspired models, and was designed for both indoor and outdoor activities. Sensors in its head allowed it to navigate rocky terrain and avoid obstacles. Where previous models couldn’t, Spot Classic could adeptly climb stairs and ascend hills.

SpotMini is the smallest dog robot yet. Spot is a compact, agile four-legged robot that can scurry around your office, home, or outdoors. It can map its location, recognize and avoid obstacles, climb and descend stairs, and open doors. It can also fetch your favorite drink and a glass without breaking the glass.

It is all-electric with no hydraulics. SpotMini has a host of sensors that gives the robot advanced navigation capabilities. Its perception sensors include stereo and depth cameras, IMU, and position/force sensors in its limbs.

It is remote controlled by a human operator while also being able to navigate and perform some basic tasks autonomously. SpotMini has an optional arm and gripper that allows it to pick up fragile objects and right itself after slipping on a wet floor. It is capable of omni-directional walking with multiple walking and trotting gaits. By adding more cameras, SpotMini can work as a security guard.

By adding a snake-like arm, the robot can open doors. Last year, a promotional video of the SpotMini using its forward claw to open a door for another robot reached the top spot on YouTube, with over 1 million views. Later the same month, a video showed the SpotMini persevering to open a door even when a human tried to interfere.

It can be used to survey progress or spot hazards at a construction site. Perhaps the most interesting thing that Spot Mini can do is carefully picking up a wine glass and loading it into a dishwasher. Boston Dynamics has made advances, making robots safe to be around humans and maneuver around a house. SpotMini is the quietest robot the company has ever built.

How much will SpotMini cost? Think upwards of $20,000—not your home consumer product.

Boston Dynamics has created other awe-inspiring robots, such as the Cheetah. The Cheetah is a four-footed robot that gallops at 28 miles per hour. It holds the land speed record for legged robots, and it can jump over obstacles while running. 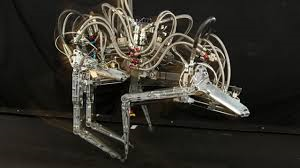 MIT’s Cheetah 3 robot is equipped with new algorithms that help it navigate its environment by touch. It doesn’t need to see to run up a set of stairs. Engineers want Cheetah to operate without seeing the path in front of it. They feel that relying too much on vision could slow it down, or make it stumble. The plan is for the Cheetah to go where humans can’t. Dangerous, polluted, and complicated work can be done a lot more safely using remote controlled robots; but a robot may not be able to see in these environments.

Atlas is the latest in a line of innovative humanoid robots that Boston Dynamics is building.  Atlas' control system coordinates the motions of the arms, body and legs to attain complete body manipulation. 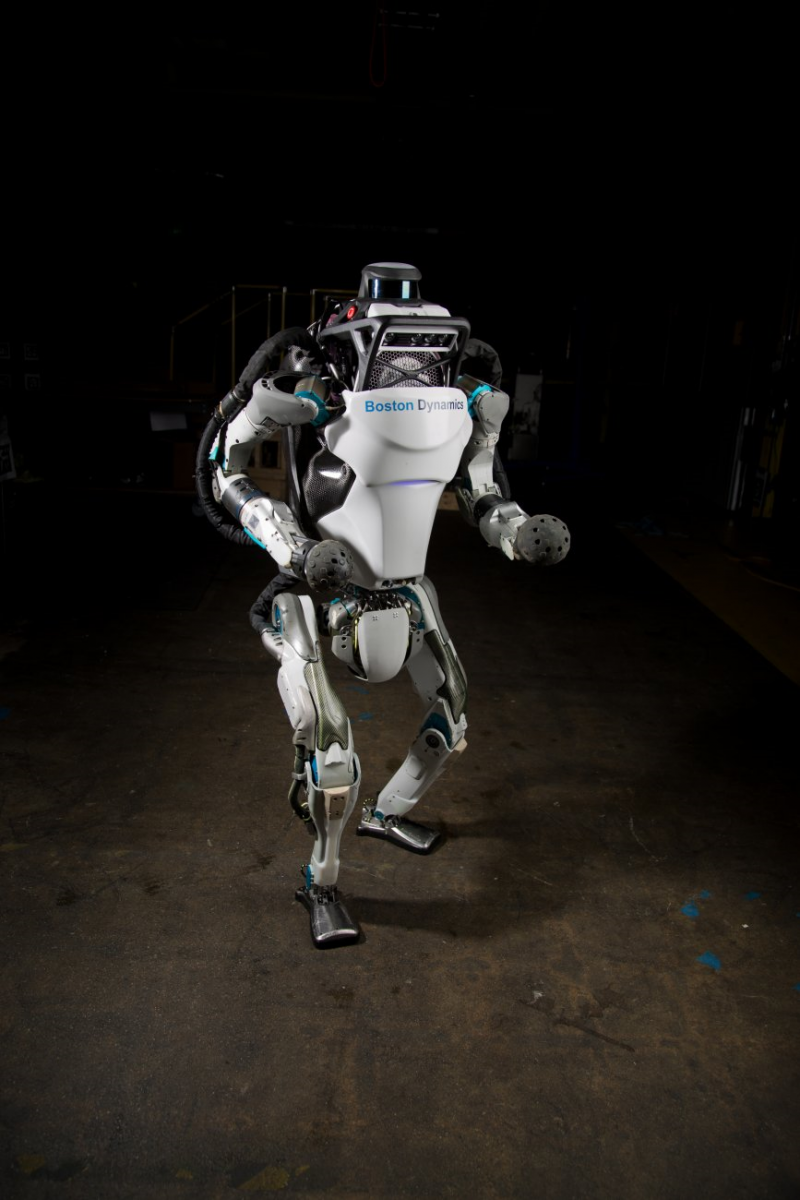 Atlas was built using 3D printing to save weight and space, resulting in an outstandingly compact robot with high strength-to-weight ratio.  Stereo vision, range sensing and other sensors allow Atlas to manipulate objects in its environment and to travel across rough terrain. Atlas also keeps its balance when knocked or pushed and it can get up if it falls.

Boston Dynamics combines the ideologies of dynamic control and balance with state-of-the-art mechanical designs, cutting-edge electronics, and software for perception, navigation, and intelligence, while building machines that break limitations while working in the real world.