The market for cobots has seen an exponential boost in demand; In fact, it is the fastest growing segment of industrial automation today. 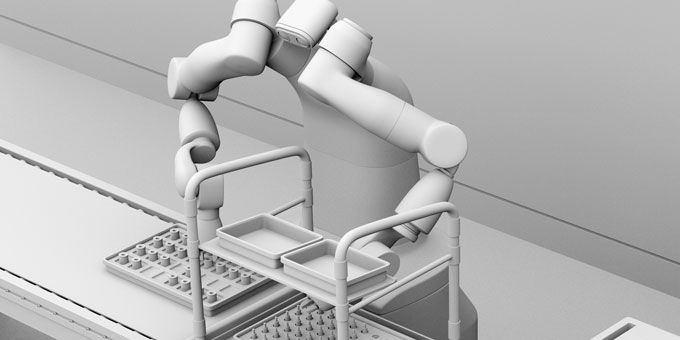 Rise and Rule of Cobots

The landscape of industrial manufacturing has undergone a whirlwind of change since the first Industrial Revolution in the 18th century. It would not be hyperbole to state that the past few decades, particularly, have witnessed an unbelievable progression in this regard, owing to the advancements in robotics and automation. In 1959, Joseph Engelberger, widely credited as the Father of Robotics, and American inventor George Devol, made history when they installed the world’s first industrial robot, Unimate, at General Motors; Devol had patented this Programmed Article Transfer device in 1954 and together, they changed the course of developments in robotics vis-à-vis industrial production. Almost half a century later, in 2008, Cobots entered the scene and sparked off an era of enhanced efficiency and high-speed production.

Collaborative Robots, nicknamed as Cobots, are robots engineered to work alongside humans. Universal Robotics, the Danish company that pioneered this breakthrough invention, sold the first cobot, a robot arm UR5 to Linatex, a Danish supplier of technical plastics and rubber products, at a time when deploying robots in close proximity to humans were unheard of. Till then, robots that aided in industrial production were caged and isolated from human workers to prevent accidents and industrial hazards. Over a decade later, the market for cobots has seen an exponential boost in demand; In fact, it is the fastest growing segment of industrial automation today. Herein, Vozag attempts to explore the growth in popularity of collaborative robots, and the future and potential of robot-human interaction within an industrial set-up. 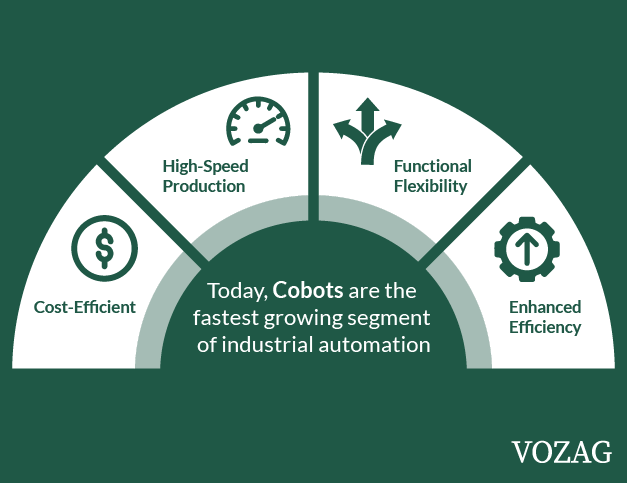 Today, cobots are being used extensively in industries, including aeronautics, pharmaceuticals, furniture and related equipment, food and beverage, plastic and polymers, metal and machining, and automotive. Presently in the market, there are cobots which are equipped to enable four distinct and precise collaborative operations: hand-guiding, power and force limiting, speed and separation monitoring, and safety monitored stop. Different industries demand different operations, depending on their nature of production.

For instance, some industries require speed and separation monitoring cobots that have built-in sensors to detect obstacles. These cobots work within a safety zone, and when they sense the presence of humans nearby, they adjust their speed and track the location of the human. In case he/she gets too close, they would stop working to avoid accidents. The power and force limiting cobots are also similar in terms of their functioning. A hand-guiding cobot, as the name suggests, is enabled with pressure-sensitive devices at the end of their arm, which facilitates easy holding and handling of objects of different shapes and sizes. Human co-workers can teach these cobots to apply the right kind of pressure and speed, as is needed for the process.

So why do we need more such cobots? Firstly, they offer more flexibility than a human workforce, in that they can be programmed to perform a range of tasks. They can switch functions quickly and can adapt to all kinds of tasks in no time. Also, they are suitable for labor that is physically straining and for tasks that do not require critical thinking or decision-making abilities. This way, the human resource can invest their energy in the more creative aspects of the process and the whole system works faster.

An MIT research found that when humans worked in tandem with robots, it was 85 percent more productive than when either worked alone. Cobots eliminate the risk of repetitive strain injury (RSI) that humans contract due to the stress of mundane, repetitive work. Also, they need minimum human supervision, and may be easily programmed to perform any task. Therefore, with respect to productivity, cobots are the way forward. Moreover, since they are specifically programmed to function in a safe zone, they are harmless and significantly reduce the chances of industrial hazards while increasing productivity.

Another critical factor, concerning production, is the cost-efficiency that cobots offer. In addition to ensuring efficient and fast production, a cobot is also the most economical choice in the long run when compared to the production cost that would otherwise be incurred by employing human workers. Moreover, machines also guarantee a certain degree of longevity.

With the growth of automation in industrial manufacturing, there are rising concerns about an impending wave of unemployment that might hit the world. Though there is some truth to such speculation, one cannot simply ignore the fact that, in terms of scale and efficiency, cobots present a much better future than continuing with traditional methods of manufacturing. That said, although cobots are more efficient than humans on different fronts, industries would still need humans to program and operate these cobots. Therefore, the careful integration of robots into the workspace is what is ideal for an optimum boost in revenue and production.