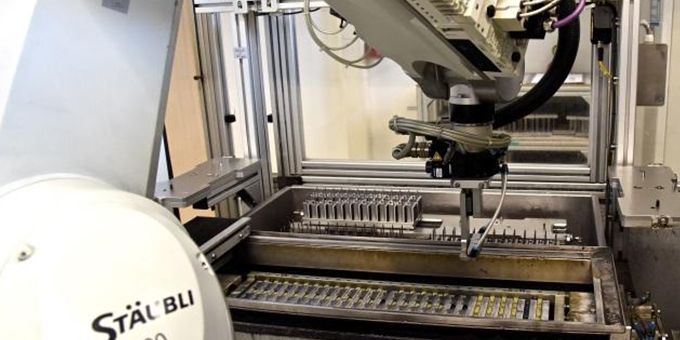 The Dutch electronics giant employs around 380 people at its factory in Klagenfurt, which is situated on the eastern shore of Lake Wörthersee. There are 180 employees who work on the production line for hair clippers and beard trimmers, while the other 200 employees are engaged in research and development. This makes Klagenfurt one of the major R&D facilities of the Netherlands-based group and its most important producer of blades.

Christian Rassi, Lead Engineer Tool Design at Philips Consumer Lifestyle, explains what is involved in manufacturing the high quality components for the Philips range of hair clippers and beard trimmers: “Grinding the cutter blades is one of the most time consuming and costly steps in production. This is why all of our grinding machines are automated. We now intend to take the next decisive step and combine these two distinct processes – parts separation/feed and machine grinding – in a single automated cell with two robots.”

The specific remit was to automate and coordinate a Mägerle grinding machine with the upstream and downstream operations. The main challenge for this complex task is the cutter blades arrive in bulk via an AnyFeeder system. The first robot in line has the job of separating them and slotting them into a magazine. A second robot then has the job of loading the Mägerle machine as well as removing, cleaning and separating the finished parts.

The specifications for these two robots could not be more different, as Rassi explains: “Because of the cycle times required, only high-precision, high-speed kinematics could be considered for the separation of the bulk feed followed by the loading of the magazines. For the loading of the grinder however, we need a robust, fully enclosed six-axis robot with a long reach and with both robots being supplied by the same manufacturer.”

The team at Philips had strict criteria for the selection of suitable robots. The management of the company have plenty of robotics experience and know the market well. After detailed analysis, the solution was soon identified and an order was placed with Stäubli. “In the six-axis TX90L, Stäubli has a proven robot for the automation of machine tools,” says Rassi. “And the high-precision TP80 FAST picker with its impressive dynamics matches our exact requirements for use at the feed station. No other manufacturer could offer this combination of two perfectly suited robots.” 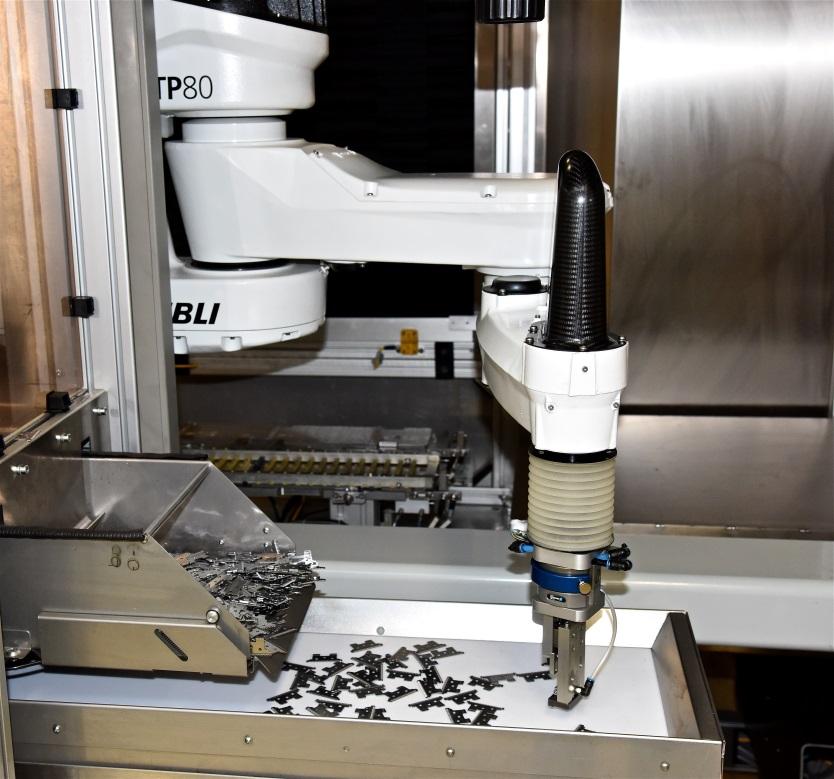 The TP80 FAST picker removes the unsorted cutter blades from the belt and slots them into a magazine at ultra-high speed.

After the components for the system had been decided on – the delivery and separation of the cutter blades were handled by an AnyFeeder with a static image processing system – this meant implementation of the project could begin. The complete system is a collaborative production between the in-house Philips design team and Vipro Automatisierung GmbH, which has looked after the maintenance of all Mägerle grinding machines at Philips in Klagenfurt for many years. 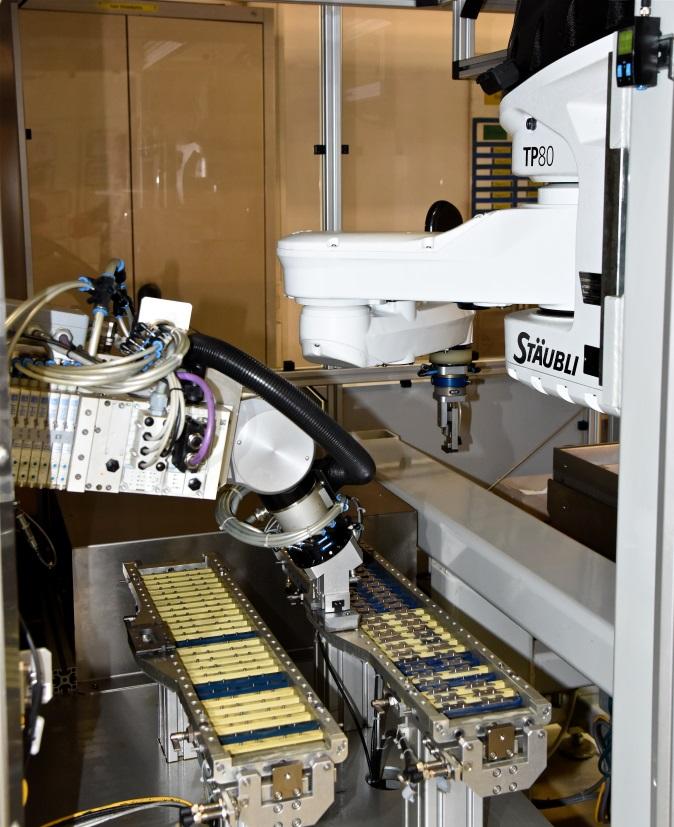 As soon as the magazine is full of blades, the six-axis TX90L picks it up...

...and places it in the clamping device of the grinder.

With its fully encapsulated design, the Stäubli six-axis robot can easily withstand the conditions inside the grinding machine.

While the Philips team, assembly, designed the automation solution programming and commissioning were largely the responsibility of Vipro. In the past few years, Vipro has specialized in the separation of items delivered in bulk and was therefore able to bring its considerable expertise to carry on the project. This was necessary, as the design requirements for the system were extremely demanding. With many different product variants that the system would be handling, the automation solution had to be highly flexible and capable of retooling within a short space of time. It was also important that the system had a minimal footprint.

On closer inspection you could see that not a single centimeter of floor space had been wasted. Clever, space-saving solutions such as the careful positioning of the transfer point on the assembly line make it reachable by both robots, as well as the integrated gripper station on the back of the cell are testimony to the experience of the engineers, who at the same time ensured accessibility to the most important system components. “We have an ongoing struggle to fit everything into the production area, and we have therefore had to be as efficient as possible in the use of the available space,” adds Rassi.

Workflow in the cell at a glance

The process starts with the bulk delivery of the cutter blades via an AnyFeeder which drops them onto a feed table ready for the TP80. The FAST picker receives the positional data of blades from a ceiling-mounted camera. The computing speed of the software enables the robot to instantly determine the position and orientation of the blade.

With this information, it can pick up the part and place it in a magazine, ensuring that this stage of the process does not cause any delays and the TP80 fully exploits its dynamic potential. Rassi: “Only the FAST Picker could achieve the requisite cycle times here. It simply would not be possible with a conventional SCARA.” In addition, the magazine loading performed by the TP80 demands maximum precision. Each blade has two tiny holes which are slotted onto pairs of tiny pins in the magazine. To get this right, the robot operates within a tolerance range of two hundredths of a millimeter.

As soon as the magazine has its full complement of cutter blades – between 54 and 96 depending on the model – the six-axis TX90L picks it up and lowers it into the clamping device of the grinding machine. The robot then drags a special, spatula-like tool across the full magazine to ensure that all the blades are accurately positioned and that none are protruding, which would have serious consequences for the grinding process.

When the grinding stage is complete, the six-axis robot removes and places the magazine in a station where the contents are cleaned. The TX90L then uses a suction gripper to remove the now cleaned parts and place them in an even larger magazine with a capacity of around 1,000 parts.

The changeover between the different types of gripper which the TX90L requires for its varied range of tasks is fully automated and performed by a tool change system.

High demands in terms of precision are also made on the TX90L, as the magazines are relatively long and inserting them into the clamping device of the grinding machine calls for a high degree of accuracy. In addition, the robot has to withstand grinding dust and lubricants/coolants, which it does excellently thanks to its fully encapsulated design.

The high performance of the robots is making a significant contribution to the success of the pioneering system concept at Philips. “The grinding process is of great importance for the renowned quality of Philips hair clippers and beard trimmers,” adds Rassi. “The new plant, which produces around the clock in four shifts, makes this process more efficient than ever. It is only a matter of time before we also upgrade the other grinding machines in line with this concept.”

When you visit us at booth 3323 , you will be able to experience a live demo of our robotic tool changer system, as well as live presentations throughout each day.