Programmable I/O (input/output) is very useful for allowing digital servo drives to interact with each other or other elements in a system with simple high/low voltage signals assigned by the user. 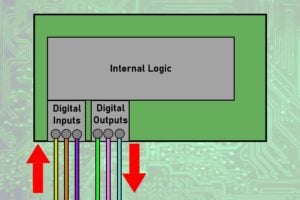 Programmable digital inputs act as variables for a servo drive, and they can be completely independent of the input from the main controller or network. These inputs can still come from the controller, but they can also come from other servo drives, other electronic devices in the system, or even something as simple as a push button or switch. These programmable inputs can be configured to trigger servo drive events, such as enable, inhibit, jog, execute an indexed move, enable a sequence, or a number of other functions.

Programmable digital outputs, on the other hand, are variables sent out from a servo drive. These can be programmed to be triggered and sent from the drive when certain conditions are met or events occur, such as over-speed, position, inhibit, enable, a sequence step, or even receiving a digital input. The outputs send a high or low voltage signal to other electronic equipment in the system, including the controller or even the input terminals of other servo drives.

Great. What can you do with that?

Together, I/O allows the servo drives to play a greater role in the operations of the machine or robot. In certain cases, this can be something as simple as turning on a light while a motor is spinning or triggering a tone once a motion cycle is complete. However, it can also be used very effectively to take the computational load off of the controller and/or network, and in some cases, it can actually improve the synchronicity, safety, and reliability of the device. 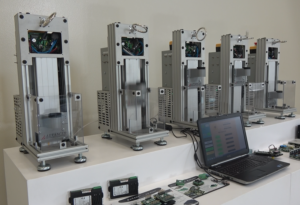 One interesting use of I/O is to use one servo drive to trigger indexes and sequences in other servo axes. This is the case with ADVANCED Motion Controls' five ball toss demo, where five balls are tossed by linear motors through spinning rings spun by rotary motors. This means there are ten motion axes in the system, and thus there are ten servo drives.

Following so far? If you need a visual, you can check out the video here.

This same principle can be applied to any other device where one function should be dependent on the other, such as a liquid dispenser for containers on a conveyer belt, ensuring that the dispenser is only activated when the container is in the correct position using a programmable limit switch, a digital output specifically based on motor position.

Safe torque off (STO) isn't just a handy feature, it's potentially life-saving. And no, I'm not being dramatic.

Safe torque off is a safety feature available on many digital servo drives that can instantaneously shut down power to a motor without powering down the servo drive.

Now if you've worked with servo drives before, you might be thinking, "isn't that the same as an inhibit function?" And you would be half-right. The end goal of both is supposed to be the same. The main difference is the drive inhibit function is done solely through the servo drive's logic. A logic glitch or poor grounding could allow the motor to start up again. 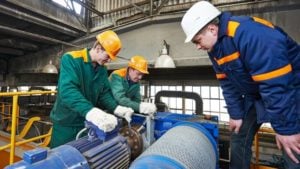 Safe torque off, on the other hand, causes a physical disconnect on a hardware level between the drive's power devices and the motor phase terminals, debilitating the motor and making it virtually impossible for it to accidentally start up. For the motor to possibly start up again, STO must be disabled manually before the drive can be re-enabled.

I'll spare you any gruesome visuals, but it isn't hard to imagine scenario where a motor suddenly applying torque could cause serious injury or death to a person performing repairs on heavy machinery. Let's say, the ground wire for the inhibit pin slips loose and no one notices before it's too late.

You're still picturing something nasty right now, aren't you? I'm sorry. If necessary, take a break and look at some kitten photos.

By activating STO, the repair-person can work safely with the assurance that the motor physically cannot start up unexpectedly. A series of steps would need to take place before torque could be applied to the motor, more steps than could happen accidentally.

So yes, STO and inhibit ultimately achieve the same function, but STO has an extremely low chance of failure, making it ideal as a safety feature. We've made safe torque off available on most of our newer digital servo drives.

Before you ask though, no, we're not saying you'll get better performance or accuracy by slapping two encoders on the same motor. You won't, I promise.

So what do we mean by using two feedback devices? Many servo drives are capable of reading an additional feedback source in addition to the motor feedback. This extra feedback source is known as auxiliary feedback, and it is usually attached to the load being moved in a device. 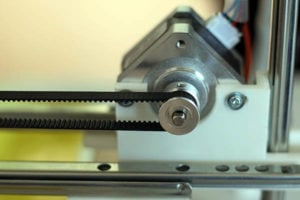 Belt Driven slides are susceptible to backlash errors. These can be corrected using dual-loop feedback.

Auxiliary feedback is useful in applications with a load that's not directly driven by the motor, such those with a belt driven carriage or a complex gearbox. Applications like these are susceptible to backlash, as you lose rigidity with each mechanical link. When backlash occurs, the motor position isn't necessarily indicative of the load position, resulting in errors if you try to close the position loop with the motor encoder.

There are of course methods for reducing backlash from a mechanical standpoint, but sometimes there's only so much that can be done. When you have ball screws, belts, chains, or gears, some position error due to backlash is inevitable.

If the system detects that the load is short of its desired location, it can have the motor rotate a little further to compensate. Conversely, if the load has overshot its target, the system can walk it back a little.

Nearly all of our digital servo drives support auxiliary feedback. 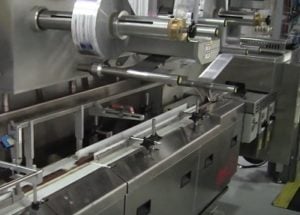 High speed capture is a process of capturing motor position data within microseconds of being triggered, allowing for incredibly precise tracking of the load position even at high speeds.

High speed capture is very useful for applications where both high speed and precision are required for efficiency. Think of devices that might cut out candy bar wrappers from large sheets as they move along the conveyor belt and then picks them up to be wrapped around individual candy bars. High speed capture ensures that the cutting and wrapping motions can be synchronized perfectly with the motion of the sheet of wrappers and the pieces of chocolate. The servo drive can initiate these other processes (through I/O or other methods) precisely when the servo drive reaches the correct position.

In order to have high speed capture, ample processing capabilities are required. The servo drive must have a dedicated input for processing new position data within a microsecond.

As we said before, servo drives can do a lot more than just spin motors. As we alluded to previously, programmable I/O allows the servo drive to interact with other devices in a machine, but they can do more than send binary high/low signals. Many digital servo drives have room for additional logic programming that allow them to make their own computations rather than rely on controller input. This can even eliminate the need for a separate controller.

Often this can be done by embedding Click&Move programs into our drives.

Our Click&Move control system can be run from a variety of platforms (including Windows PC, Linux PC, and our MACC controllers), but in some instances it can even be run directly from one of our digital servo drives using the additional logic space. Click&Move programs can be far more complex than simple pre-programmed indexes and sequences; it can make decisions and computations based on many system variables.

Let's take, for example, a servo-driven pump could be used to efficiently inflate portable structures used for various temporary facilities. The necessary pumping speed to inflate and keep the structure inflated will be different depending on the altitude, temperature, and humidity in the location present. By importing air tables or psychometric charts and attaching the necessary instrumentation for data, Click&Move can interpolate the tables and compute the ideal pump speed all within the servo drive, eliminating the need for a controller and keeping the structure perfectly inflated. 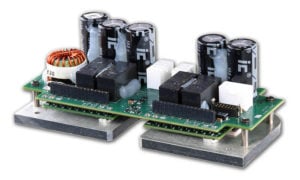 There are several advantages to having a multi-axis servo drive, but the most obvious one has to be the saving of space. Combining multiple servo control axes on the same PCB is not only more compact, but it can also cut down on the space required for cabling and the time required for installation. 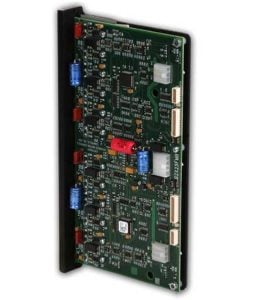 While saving space is the most obvious advantage of multi-axis servo drives, it's not necessarily the most significant. In many cases, a multi-axis servo drive can be more economical. Building two servo drives on a single PCB means less wasted material and shorter manufacturing, testing, and packaging time. With custom servo drives, there are additional costs associated with the extra engineering required, but these initial costs can be offset with volume.

Arguably the most overlooked advantage of multi-axis servo drives is they can simplify repairs and cut costs by having fewer unique parts.

A prime example of this concept is in the Talon military robot, for which there are two axes of motion for the treads and two axes of motion for the gripper arm. There are two dual-axis servo drives in the robot. One might guess that one of the dual-axis drives controls the gripper axes and the other one controls the tread axes, but that's not the case.

Each dual-axis servo drive is designed to accommodate one tread axis and one gripper axis. This way, both drives in the unit are identical, and the military only needs to keep one type of servo drive in stock as spares. The military likes these practices for the sake of efficiency in both storage needs and simplification of repair.

It's also worth noting that even if servo drives themselves aren't multi-axis, a similar multi-axis effect can be achieved by using multi-axis mounting cards with PCB mount servo drives.

These are just a few of the lesser-known servo drive features, but there are many more!

Is there a servo drive feature you're interested in but didn't see listed? Contact us and let us know! If we've have it, we'll let you know! If we don't, then we can discuss a custom servo drive solution!

New features on custom products can become regular features of future standard products. Innovation in the motion control industry is so often driven by the needs and desires of customers. The servo drive features of the future are limited first and foremost by imagination.