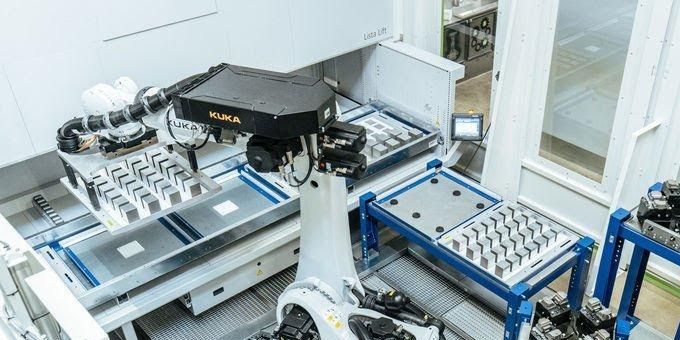 The production of worm gear screw jacks - electromechanical actuators that convert a rotary motion into a linear motion - was a laborious process at the Zimm company from Austria in the past. For example, the individual components used to be clamped manually onto pallets. This procedure was both time-consuming and had high production costs. A project by the Lindau-based automation specialist Vischer & Bolli Automation and its cooperation partner proves that it can also be simplified. Together they developed a flexible manufacturing cell for about 30 different types of screw jacks. In addition to a five-axis milling machine from Grob, which ensures that high-precision components are created from the raw material, two KUKA robots are used here, which take over the loading and unloading of the fixtures and workpieces with their subsequent finishing in a fully automated manner in a modular production cell. The specially adapted clamping technology and sensors from Vischer & Bolli Automation guarantee reliable processing in the cell and machine.

Bespoke gripper solution for the robots

For the special gripping tasks in the robot cell, those responsible at Vischer & Bolli Automation, Marcel Haltiner, fell back on a long-standing partner: the system technology department of the gripper specialist Zimmer Group from Rheinau, Germany. It is one of the world's leading specialists when it comes to customized solutions. With its system solutions, the Zimmer Group's system technology department can, among other things, optimally equip any robot make - including KUKA robots, of course - and significantly increase their functionality and efficiency. For the production plant at Zimm, which is located in Vorarlberg, Austria, the department developed a special version of a double gripper with servo technology. This can grip components of all types and different geometries. It has a stroke of 150 mm and a holding force of 5000 Nm or 3000 Nm with a secured hold via a trapezoidal threaded spindle in the event of an unforeseen power failure. In addition, the clamping pressure on the gripper can be variably programmed for each workpiece.

Almost all tasks that previously had to be carried out by hand at Zimm are now performed fully automatically by a KR QUANTEC and a KR AGILUS from KUKA. The five-axis milling machine is supplied with raw material via a lift system. To do this, the Zimm employees load trays inside a huge lift system which projects four meters into the production hall. There is enough space to store raw material and finished parts here, also the clamping devices and, if necessary, tools are stored in this lift system. Afterwards, everything is automated. A special gripper, which is docked to the KR QUANTEC robot via the V&B zero-point clamping system, first removes the trays filled with raw parts (aluminium and cast cubes) in various sizes from the lift system in the robot cell and places them on an attachment table. Then the robot uses the Zimmer gripper to automatically position four raw parts in the Vischer & Bolli fixture and inserts them into the milling machine. "The machine can produce about 30 different components in batch sizes between one and 200 from aluminium and cast iron", explains Marcel Haltiner and adds: "By loading the 4-fold fixture outside the machine, we avoid unnecessary downtimes with a table machine".

While the milling machine is machining the four workpieces, the Zimmer gripper on the KR QUANTEC loads another fixture in parallel. Once the components have been finished from both sides - the turning process is also automated - the gripper places them on the workstation for finishing. There, a KR AGILUS of the type KR 10 R900-2 deburrs and cleans the aluminum and cast iron parts. Meanwhile, the Procam master computer of the modular robotic cell takes over the entire logistics. "The next step in automation is to check all the measurement parameters in a further process step. Tolerance deviations can then be transmitted and automatically corrected via a feedback loop to the milling machine," explains Haltiner.

When all production steps for the workpiece have been completed, the Zimmer Group gripper places it back on the tray for parking in the lift system. The last step is now carried out manually again, with the employees simply removing the finished products from the tray and passing them on for assembly. "Among other things, automation allows us to produce in unmanned shifts at night and on weekends, which increases our productivity and competitiveness," Hardy Ponudic, production manager at Zimm, explains the advantages of the robotic cell. For example, all the work that until recently had to be done manually with a great deal of manpower and time is now carried out by the two KUKA robots in the cell. "This upgrades our workplaces because employees are now being trained to become robot operators," Ponudic says. According to some studies, the Corona crisis has already worsened the highly noticeable shortage of skilled workers, and so it is also becoming increasingly difficult for Zimm GmbH from Lustenau to recruit suitable employees. Thanks to automation, employees who previously took care of monotonous tasks at the milling machine can now be deployed in other areas where they can concentrate on value-added activities. "Our solution runs largely without further intervention and relieves employees primarily of less demanding tasks such as clamping and unclamping workpieces," affirms Haltiner. In addition, the solution is smart because, for example, alerts can be sent to a smartphone via a mobile interface. The alarmed colleague can then decide with complete flexibility whether intervention is necessary or not.

Almost unlimited possibilities thanks to the modular design of the cells

Due to the modular design of the robot cell, Haltiner sees almost unlimited application possibilities: "Machine and mould construction, medical technology, the automotive sector - in principle, we offer the possibility for entry into automation for all machining companies." Because Marcel Haltiner is convinced that the future of machine tool building is automated. Especially when it comes to parts handling, he sees hardly any other option in the future in terms of economic efficiency and feasibility. The Zimmer Group, as a pronounced handling specialist, also benefits from this. Haltiner also expressly emphasizes that today it is important for customers to have only one contact partner for such automation projects, for clamping technology, robot cell and software.

A new project is already underway with the gripper manufacturer and Vischer & Bolli Automation, involving an interlinked solution with 8 machines in the hydraulics sector. 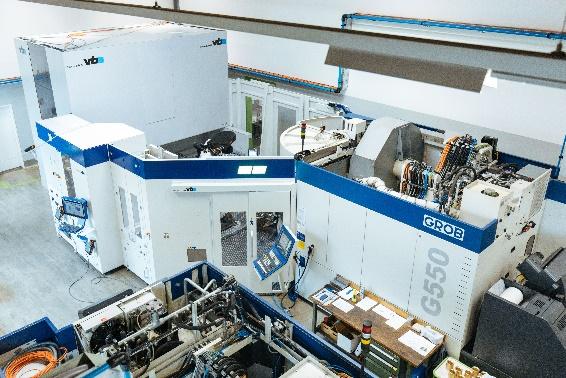 In addition to a 5-axis milling machine from Grob, two KUKA robots including a gripper from the Zimmer Group are used in a modular production cell from Vischer & Bolli Automation to load and unload the workpieces with fixtures and then to rework them automatically. Image: KUKA 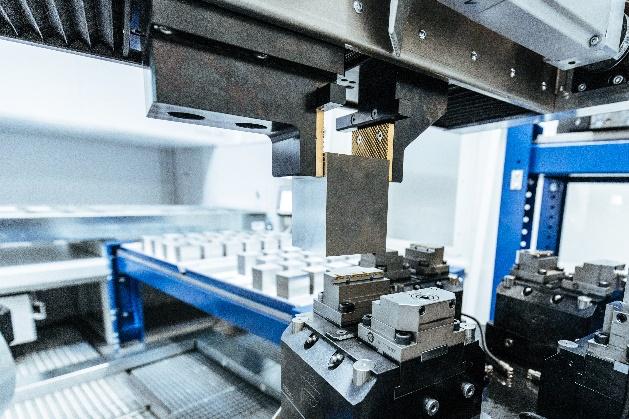 Fig. 2: A KR QUANTEC from KUKA takes over the loading and unloading of the components automatically with a gripper from the Zimmer Group. Image: KUKA​ 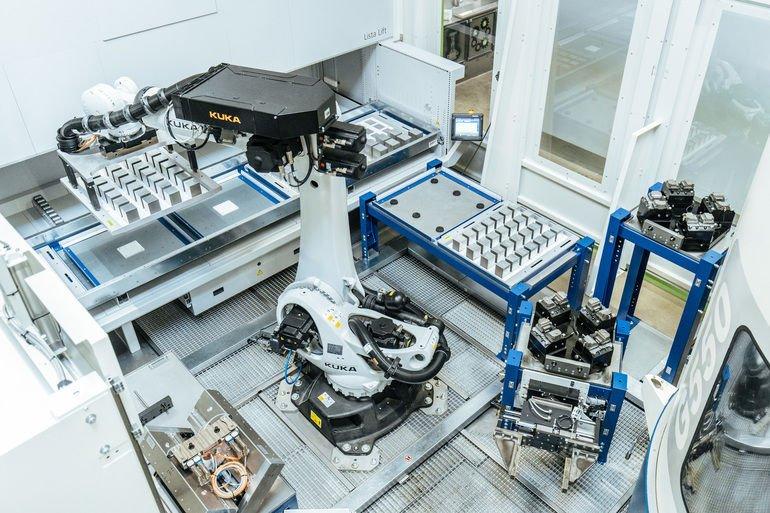 Fig. 3 A bespoke gripper from the Zimmer Group on a KR QUANTEC removes a pallet with blanks. It loads the milling machine with the components, removes them after machining and automatically deposits them for reworking. Image: KUKA​ 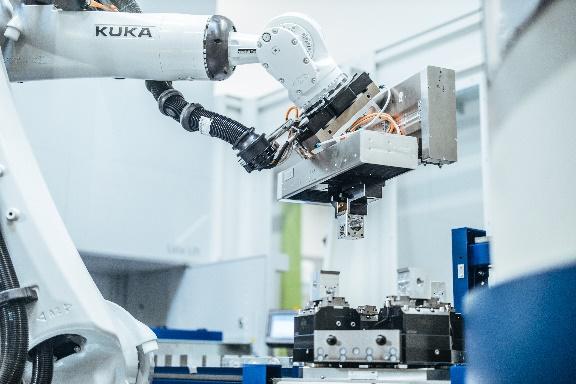