When implementing mobile robotics solutions in a facility, it’s important to consider strategies for ensuring stability, seamless interaction with people, accurate detection of obstacles, and set up a successful emergency evacuation plan. 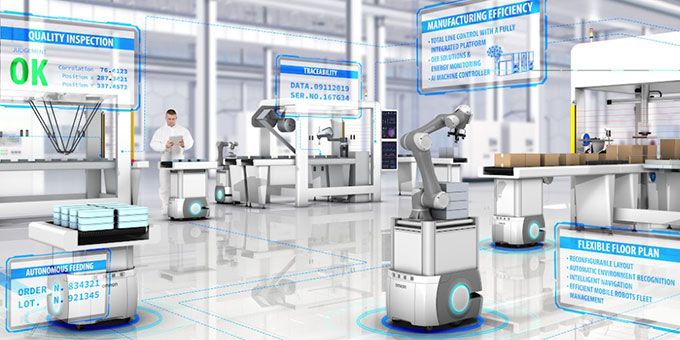 Manufacturers and material handler have long looked to stationary robotic solutions to help improve operation efficiency and reduce cost, but many forward-thinking organizations are now considering a new kind of robotics to further their competitive advantage.  Autonomous Mobile Robots, or AMR’s help transport of raw materials, work-in-progress product, or other finished goods from one place to another safely and dynamically.

The learning curve associated with such a new and unfamiliar technology may seem overwhelming, particularly when your team is lacking expertise on how the robots will interact in a dynamic and peopled environment. Fortunately, today’s AMRs are designed to make implementation as seamless as possible.

The power of a mobile robot solution

AMRs self-navigate through challenging environments, including narrow passageways and peopled work zones, to transport payloads between workstations. Unlike traditional autonomously guided vehicles (AGVs), AMRs don’t require any facility modifications, so they’re great for improving flexibility of production lines where changeovers must be frequent and fast.

The advanced control system as well as built in sensing devices help AMRs intelligently navigate around people and unplanned obstacles that would render traditional AGVs incapacitated. Designed with integrators and end-users in mind, AMR systems are easy to customize for a wide range of facilities and applications, with the goal of improving overall operational efficiency.

In the following sections, we’ll look at several considerations for ensuring the highest level of safety and production efficiency with respect to your mobile robots.

Payload positioning is a critical consideration for any AMR. Even if a particular payload does not exceed a robot’s capacity, it could still make the robot tip over if positioned incorrectly. An overturned robot would not just be unproductive – it could also become a tripping hazard for any employees within its vicinity. For these reasons, payload stability must be considered when loading AMRs.

Mobile robot payloads go on the top of the unit, so a fully loaded AMR will have a higher center of gravity than an empty one. The goal is to position the payload so that its weight is centered as close as possible to the robot’s center. The higher the center of gravity, the more gradually the robot will need to slow down to avoid tipping over or throwing its payload forward.

As we discussed earlier, stable stopping depends on a robot’s center of gravity. Fully loaded AMRs tend to have a high center of gravity, so they need more time to stop from a given speed. Laser-based area scanners and sensors help them detect obstacles in their path while there’s still plenty of time and distance to stop smoothly.

Manufacturers can also set up zones that allow different speeds for different situations. Stopping distances can be calculated based on how much time a robot needs to stop at its current speed upon receiving a stop signal and not hit the obstacle in question. Using these stopping distances, manufacturers can program zone sets into their areas scanners to react to unexpected obstacles depending on level of severity.

An additional consideration with respect to stopping is what happens when an AMR approaches a restricted area, like an external loading dock. For these scenarios, be sure to consider maximum load scenario that would cause the longest stopping time, and determine aspects of the payload and surface that might pose problems for the unit’s traction and its general stability.

Consideration #3: The nature of the surrounding environment

The surface a mobile robot travels upon can have a large impact on its balance and ability to stop safely. If it’s uneven, wet, cluttered, full of potholes, or on an incline, the robot’s high center of gravity may have a detrimental effect. The robot manufacturer should define angle of incline and decline, and end users should avoid exceeding this specification.

Aside from the possibility of an AMR tipping over and spilling its load, surface issues can also make it lose track of its location. If the robot is spinning its wheels inside a pothole, it might think that it’s moving closer to its destination when it isn’t. Since productivity depends on the robot knowing exactly where it’s located, this is a problem. Even little things like a water puddle can throw the robot off its course by making the wheel slip.

To make the AMR aware of its environment, including the restricted areas, manual teaching or walk-around is ideal. A walk-around, which is easy to complete, is more effective than map teaching. Users can control the robot’s motion by connecting a teach pendant, and in many cases an AMR will have a joystick that lets operators guide it around the facility.

It’s essential to have an emergency evacuation plan for every facility. Manufacturers must prepare for situations like fire evacuations well in advance of the actual emergency occurring. Personnel must know all available exits and strategies for leaving the facility, so that everyone can get out of the hazardous situation as fast as possible without incurring further injuries.

When mobile robots are part of the environment, manufacturers should incorporate them into evacuation plans. The external alarm system needs to tie in with each robot’s internal messaging system so that they’ll respond instantly and correctly when an emergency occurs. Unlike people, robots don’t need to leave the facility during an emergency, but they must allow human workers to have direct access to the exits.

A good strategy for an AMR emergency response would be for each robot to immediately move away from the dedicated evacuation paths to ensure people can travel safely to certain designated locations. It may also be necessary to instruct AMRs to leave the charging stations and move to a secure area, which should also be done using a path nonintrusive to any exiting employees.

Consideration #5: Interaction with other machines

In addition to people, AMRs must communicate with other equipment. Some AMR tasks involve loading and unloading parts from machines, and they need a way to coordinate these activities. Typically, the machine or the system will send a response to the network, which in this case would be a “fleet manager” that serves as the master planner of the mobile robot system.

A fixed machine can send a signal to the enterprise system to request for a robot to pick up a part. The machine then receives an estimate of when the robot will arrive and waits for the arrival signal. As the AMR approaches the machine, there comes a point where it needs to temporarily disable its area scanner, so it’s important to have it reduce its approach speed in case a person gets in the way.

AMRs can be a game-changing solution for manufacturers, and their flexible design with zero required facility modifications makes them easy to implement. Manufacturers must keep several considerations in mind regarding safety, stability, and employee acceptance.

Omron is an industrial automation partner that creates, sells and services fully integrated automation solutions that include robotics, sensing, motion, logic, safety, and more for manufacturers in the automotive, semiconductor, food and beverage packaging and other industries. Established in 1933, Omron helps businesses solve problems with creativity worldwide, with more than 37,000 employees serving over 110 countries. Adept Technologies is now a valued part of the Omron family.

How to Choose a Mobile Robot

Can you be assured that each AMR in your fleet will position itself consistently to reliably pick up or deliver goods from your conveyor systems, exchange a pallet, or perform any number of automation tasks?

Flexibility is the ultimate strategy for success in today’s challenging market for food and beverage packaging. Companies are striving to produce increasingly large varieties of products – including various sizes and combinations.