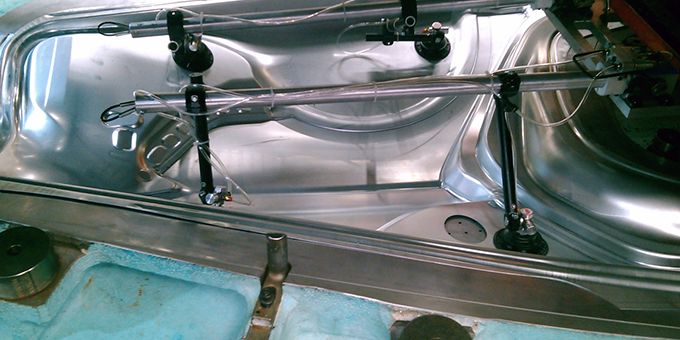 The robotics industry has been undergoing a noticeable demographic shift in recent years. Whereas the preponderance of robotics usage had traditionally been in conjunction with industrial applications, there has been significant growth in the use of non-traditional robots. The most popular are customer-service robots, personal-assistant robots, unmanned aerial vehicles (or drones) and so-called “driverless” vehicles. Despite that shifting landscape, industrial robots will remain a critical part of a market that some expect to reach $500 billion in sales revenue by 2025.

That being said, there are still manufacturers in these industries and many others who can further enhance their experience with automation applications. Two that readily come to mind are the metal-stamping and metal-assembly industries.

In the metal-stamping industry, there are a number of commonly used styles of press lines on which parts are formed, including:

No matter the type of press line that is used, keep in mind that stamped parts are not always completed parts. In many instances, the stamping will need to be welded or assembled before it becomes a finished part. These requirements transform the metal-stamped part into a metal-assembly process. In this case, robots and robotic EOAT play an important role in ensuring the efficiency and accuracy of the metal-assembly process.

Now that we have identified and defined the different types of press lines that are available, the remainder of this article will focus on the four critical considerations that must be made in order to optimize automation or robot-dependent press and body shop operations. It will also offer direction on how to choose the best automation tooling or end effector for the operating conditions.

Imagine joining a 100-meter dash from a standing start at the 25-meter mark as all of the other runners are racing past. Or entering the Indy 500 after the rest of the field has already driven 20 laps. In those conditions, it will be virtually impossible to win the race. Too often, that is the position in which the suppliers of the end effectors for a new workholding or pick-and-place system find themselves.

A traditional die design process asks the end user to work initially with the die maker in order to create the die designs that will be used to make the required parts. After several review-and-revision stages, the die will be approved by the end-user and CAD drawings of the dies will be created. At this point, the supplier of the automation tooling will be selected and receive the agreed-upon die data. Using this die-date information, the tooling supplier will create a tooling design and working simulation of the automation tooling. Upon review of the user, a Corrective Actions Report (CAR) will be fashioned that makes note of any clearance or clash issues that occurred during the simulation. The CAR will be sent to the die manufacture, who will work to resolve any clearance or clash issues before shipping the dies.

To be fair, the reason for this mindset becomes readily apparent when you realize that a fully designed and functional die set can cost upwards of $200,000, while the cost for the end effectors will generally be less than 10% of that upfront cost. While it’s understandable that the system designer and end user will devote more attention to the more expensive component, all parts in the system – no matter how big or small, expensive or inexpensive – must work in complete harmony in order to create a fully functional and reliable system. Therefore, if the automation-tooling supplier was involved earlier in the design process, costly time and rework of the die modifications can be avoided.

So, the end-effector supplier will typically be allowed to merge into the design process upon receipt of a process sheet with suggested grab and/or grip points where the Finger Tooling or EOAT will be needed. In trying to catch up, the supplier of end effectors will design the system’s touch points, simulate the motions needed (clamping, lifting, pitch, unclamp, etc.) and work with the die manufacturer to ensure that the end effectors work harmoniously with the already-produced die. The die manufacturer will determine if the dies and end effectors are compatible and able to deliver what the end user needs. If modifications are needed, a corrective-action report will be created. When all modifications are made, simulations will be performed to see if the system can perform as expected.

From a macro perspective, with all of the necessary back and forth between the die and end-effector constituencies, it seems that it would behoove the end user and system designer to incorporate the EOAT supplier at the outset of the design process. In fact, thanks to advances in digital-design capabilities and the openness of forward-thinking manufacturers to reconsider the traditional ways of doing things, a “one for all, all for one” mindset regarding robot-reliant workholding and pick-and-place system design is beginning to establish a foothold.

The 4 Things To Consider

There are two basic industrial-manufacturing environments where robotic-reliant part-handling systems will be used. They are:

Whether the end-effector system is used in a press shop or body shop, there are three major operating parameters that should be assessed and quantified before the best end effector can be selected. They are:

Now that we know the types of operating environment and operational parameters the robot-driven end-effector system will encounter, it’s time to consider the construction methods of the end-effector types that can be deployed.

There are basically two options, the first of which is Modular Tooling, which is gaining in usage and acceptance. This option requires less design time because the end effector can be built from a standard library of CAD components. This results in better design consistency, along with offering more flexibility if changes in product design are ever needed. By using a standard design and components, Modular Tooling requires fewer custom parts, which leads to reduced assembly time. The finished product will also have less overall weight with reduced startup times and quicker recovery if a crash should occur during operation.

The second end-effector design option is the more traditional Welded Construction. While this method brings with it high levels of durability and reliability, its design and operational characteristics can pale in comparison in many ways to those offered by Modular Tooling. Since this method has fewer standard components in a CAD library it can take longer to design the end effector. This also makes it more difficult to factor in or predict future design changes, while variations may also exist among design teams. Building a welded end effector can also require more customized parts, which can result in longer assembly times. The end result will be a heavier part and corresponding longer startup times. Crash-recovery time can also be longer with a welded part.

Finally, there are ancillary components that can be used with the end-effector system to consider. These are:

Though the overall market demographics may be shifting, the use of robotics in workholding and pick-and-place applications in industrial manufacturing will not be going the way of the dinosaurs anytime soon. For industrial manufacturers who are using automation/robotics in their press shop and body shop operations, it is extremely important that they design and deploy an automation tooling/end-effector system that is compatible with the automation/robotics being used. The best way to do this is by involving automation tooling/EOAT suppliers in the design process from the start, knowing all of the variables and options that are in play, using the latest digital-design technologies and working hand-in-hand with all parties.

About Benjamin Pauzus, Jr.
Benjamin Pauzus, Jr.  works in Business Development, End Effectors for DESTACO, Auburn Hills, MI. He can be reached at bpauzus@destaco.com. Founded in 1915 as the Detroit Stamping Company, DESTACO is the industry’s leading global supplier of precision movement, positioning and control solutions in industrial automation. The DESTACO family of products consists of industry-leading brands such as DESTACO Manual Clamps, Power Clamps, and End Effectors; Camco™ and Ferguson™ Indexers; Robohand™ Grippers; and CRL™ Manipulators and Transfer Ports. The company operates globally through approximately 800 employees across 13 locations, and is part of Dover Corporation. For more information, please visit destaco.com.