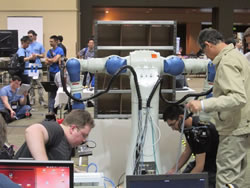 By David Szondy for Gizmag:  One of the biggest events at the recent 2015 IEEE International Conference on Robotics and Automation (ICRA) in Seattle was the first Amazon Picking Challenge, in which 31 teams from around the world competed for US$26,000 in prizes. The challenge set entrants with the real-world task of building a robot that can do the same job as an Amazon stock picker.According to Amazon Chief Technology Officer Peter Wurman, who initiated the challenge, the task of picking items off the shelf may seem simple, but it involves all domains of robotics. The robot has to capable of object and pose recognition. It must be able to plan its grasps, adjust manipulations, plan how to move, and be able to execute tasks while noticing and correcting any errors.

This might suggest that the robots would need to be of a new, specialized design, but for the Picking Challenge, Amazon made no such requirement. According to one participant we talked to, the more important factors were sensors and computer modelling, so ICRA 2015 saw all sorts of robots competing, such as the general purpose Baxter and PR2, industrial arms of various sizes, and even special-built frames that move up, down, left or right to position the arm. Even the manipulators used by the various teams ranged from hooks, to hand-like graspers, and vacuum pickups.  Continue reading for competition results:
More Industrial Robotics Stories | Articles | News