Emotional 'Pepper' robots sell out in one minute in Japan

Source: WantChinaTimes
06/22/15, 06:20 AM | Industrial Robotics, Other Topics | Personal and Recreational 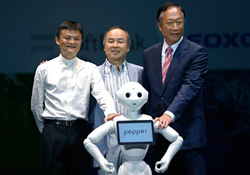 The initial batch of Pepper robots developed by Japanese mobile carrier SoftBank Corp and manufactured by Taiwan's Foxconn Technology Group sold out in one minute on the first day it went on sale in Japan.

The 1,000 Pepper robots available for purchase in June sold out in 60 seconds when online orders started at 10 am on Saturday, according to a statement from SoftBank Robotics Corp, a robotics venture formed by SoftBank, Foxconn and Chinese e-commerce leader Alibaba Group.

Orders are no longer being taken and additional sales of Pepper, which sells for 198,000 yen (US$1,625), are scheduled to be announced on SoftBank's website in July.

In addition to Pepper's emotion recognition functions, the robot generates emotions autonomously by processing information from its cameras, touch sensors, accelerometer and other sensors within its "endocrine-type multi-layer neural network," SoftBank said.