Four Market Forces That Will Shape Robotics Over The Next Year 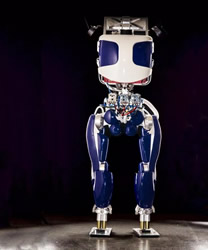 Richard Mahoney for TechCrunch:  As 2016 approaches, robotics is poised to traverse from a narrow set of industrial and military use cases to broader market applications that include commercial drones, telepresence robots, delivery robots and, of course, mobile vacuum cleaners.

But, are robots ready to be a part of our daily life?

Gill Pratt, a visionary who served as a program manager at the Defense Advanced Research Projects Agency (DARPA) and oversaw the DARPA Robotics Challenge, postulated earlier this year that robotics might soon be headed for a “Cambrian Explosion.”

The term refers to a period of time roughly half a billion years ago when the numbers and diversity of animals became critical to evolution.  Pratt offered that technology developments are ushering in a similar upsurge in the diversification and applicability of robotics.  Cont'd...