Increased automation and more use of robotic technology in these manufacturing powerhouses could help cushion the impact, according to Moody’s Investors Service.

“To the extent that robots can undertake activity that require labor, they will compensate for the negative impact that a slower growth in labor force would have otherwise had on growth,” Moody’s analysts wrote in the report this month. 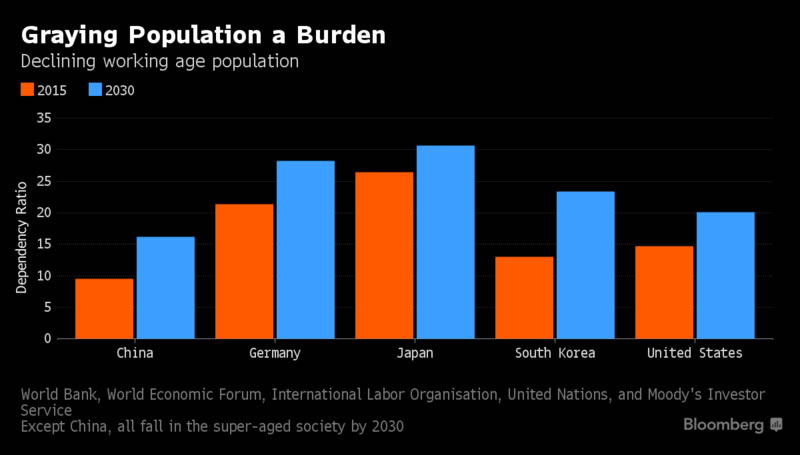 Dependency ratios -- the share of those older than 65 years of the total population -- are projected to soar in both Germany and Japan. But these countries have two things going for them. Manufacturing exports in Germany, Europe’s largest economy, already make up more than a third of gross domestic product; in Japan that stands at 12 percent. They’re also both early robot adopters.

About three-quarters of total global sales of industrial robotics machinery are concentrated in five countries: China, Japan, the United States, South Korea and Germany, with adoption concentrated in the automotive and electronics sectors. Among these, the three Asian countries bought abound half of global industrial robots since 2013, led by China, Moody’s says.  Full Article:

Conveyors for AMRs are an Effective Way to Automate a Facility

This eBook covers Glide-Line's conveyor attachments built specifically for AMRs. We go through the many variables that integrators are looking for in a cost-efficient AMR conveyor design, like: - lightweight, yet powerful - high flexibility & configurable -durability & dependability - DC-driven. At Glide-Line we solve problems that other conveyor manufacturers won't: simplicity - easy to maintain,flexible configurability, creating an efficient, hassle-free customer experience - customizations are normal to meet your needs.
More Products
Feature Your Product