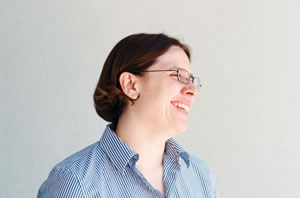 Tom Simonite for MIT Technology Review:  One perk of working for Melonee Wise’s startup Fetch is that if your feet are tired you can glide around the office on the back of a squat wheeled robot. More usually, she and her roughly 50 employees keep themselves busy designing, building, and selling the machines to work in warehouses or factories across the globe. The San Jose company’s machines are canny enough to work safely alongside people without requiring any changes to a facility—all they need is a map. Wise, one of MIT Technology Review’s 2015 Innovators Under 35, built her first robot, Zippy, in college,  out of plywood and scavenged computer parts. She spoke with San Francisco bureau chief Tom Simonite.

Do your robots replace people?

No one has ever lost a job because of our robots. Customers need us because they just can’t hire enough people. There’s 20 percent annual turnover and an estimated 600,000 jobs in the United States going unfilled.  Full Q&A: