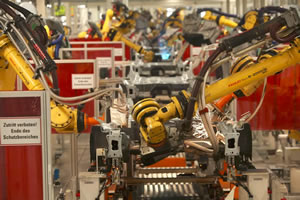 April Glaser for RECODE:  Most of the robots around the world are shipped to factories, where the machines will be used to make other machines, like cars, laptops and dishwashers.

As more people buy more new gadgets, the market for the industrial robots that build devices is poised to grow — 175 percent over the next nine years, according to data from the International Federation of Robotics and Loup Ventures.

But the driver of much of that growth isn’t going to be from the room-sized metal industrial arms that have been piecing together cars for decades.

Rather, a new generation of manufacturing robots is emerging that is more collaborative, smaller and more perceptive than traditional machinery. Collaborative robots, which Loup projects will account for 34 percent of the industrial robots sold by 2025, are designed to work safely with and alongside people in factories.