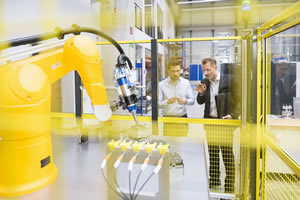 Will Knight MIT Technology Review:  Working alongside an industrial robot can be frustrating and even downright dangerous. But a new sensing system could make human-robot collaboration a cinch.

Humatics, an MIT spinout, is developing an indoor radar system that should give robots and other industrial systems the ability to track people’s movements very precisely. This could make industrial systems significantly safer, make it possible to track worker performance in greater detail, and lead to more effective new forms of collaboration between people and machines.

“We very much see this enabling robots to live in human environments,” says David Mindell, a professor in the aeronautics and astronautics department at MIT, who is the company’s cofounder and CEO.

Existing sensors, including cameras and depth sensors, are often affected by lighting and offer only a rough idea of a person’s position in three-dimensional space. Emerging safety systems allow people to work in closer proximity to powerful robots, but they shut these systems down completely if a person moves too close. By tracking a person’s motions very precisely, the new system could make it possible for a powerful robot to work in concert with a person, perhaps handing something to a human coworker. “You could get rid of the cages around big robots,” Mindell says.

The technology may offer a clue as to how manual work will evolve over the coming decade or so. Besides letting robots and humans collaborate much more effectively, it could be used to track and improve the performance of human workers. In a warehouse, for example, it might be possible to identify ways in which workers’ actions could be made more efficient or less repetitive. “There are so many places where this can be applied,” Mindell says.  Full Article: