Fetch Robotics, the pioneer of on-demand automation, today announced the results of the inaugural FetchIt! Mobile Manipulation Challenge. The competition was designed to advance the state of technology for applying mobile manipulators, which are autonomous mobile robots (AMRs) fitted with robotic arms, for use in manufacturing and related applications. The FetchIt! Challenge attracted teams from leading universities, who were tasked with using a Fetch Mobile Manipulator robot to navigate to stations in a work cell where they picked up items with the arm, inserted them into a machining tool, placed the machined items into kits, transported the finished kits to an inspection station, and then to a drop-off location. This is the first competition that encompasses the full range of activities that are commonly found in manufacturing environments. 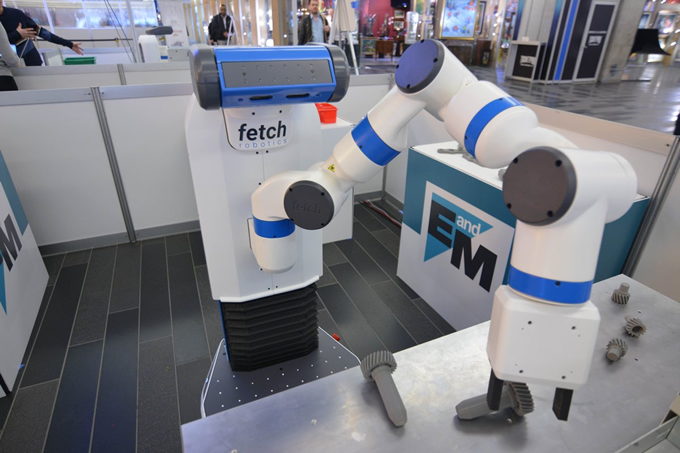 Georgia Tech was awarded first prize for successfully assembling three kits in thirty-nine minutes, earning a prize package that included a Fetch Mobile Manipulation Research Robot -- a $100K value -- along with additional prizes from co-sponsors EandM, SCHUNK and SICK AG. More information on the FetchIt! Challenge is available at https://opensource.fetchrobotics.com/competition.

The FetchIt! competition focused on teams autonomously completing combined manipulation and navigation tasks. The goal was to assemble a kit from six objects obtained from stations around the designated arena. Designed to mimic a common machine-tending process in manufacturing, the objects were picked from bins and then placed in a kit and transported to a drop-off location. All teams used a stock Fetch Mobile Manipulator, which is the most widely deployed mobile manipulation robot, deployed at over fifty of the world's leading academic and commercial robotic research centers.

“I’d like to congratulate all the teams for their accomplishments during the course of this challenge,” said Russell Toris, Director of Robotics at Fetch Robotics. “When setting out to create this challenge, we knew we wanted to keep it grounded to a real-word scenario. Interacting with machinery that is designed to be used by humans is no easy task. Piece-picking, kitting, and countless other tasks are going to require state-of-the-art perception, motion planning, navigation, and safety all seamlessly working together. The teams’ performance this week indicate that they represent some of the world’s leading experts in these skills.”

“We’re very excited to have won the FetchIt! challenge,” said Georgia Tech’s Sonia Chernova. “It has allowed us to validate our research code in a complex domain. We can’t wait to continue our work with our newest Fetch robot.”

Added Holly Yanco from UMass Lowell: “Everyone from Fetch has been helpful and very encouraging. This has been an amazing experience and the tasks used for the competition form a great basis for our ONR MURI research.”

Designed to work with the Robot Operating System (ROS) for the greatest common usability and familiarity, the Fetch Mobile Manipulator and the Freight Mobile Robot Base are robotics platforms used by researchers around the world to collaborate and share research. The Fetch Mobile Manipulator provides an affordable, fully-integrated standard platform for mobile manipulation research that has been purposefully designed for typical human working environments. The Fetch Research Robot is being used by researchers and innovators at the world's most advanced organizations, including Arizona State University, Carnegie Mellon University, Google, Northeastern University, OpenAI, Shenzen University, Softbank, Toyota Research Institute, University of Michigan, University of North Carolina-Charlotte, University of Sydney, University of Tokyo, Virginia Tech and more.

Fetch Robotics is an award-winning intralogistics automation company headquartered in Silicon Valley. We provide innovative, on-demand warehouse automation solutions for material handling and inventory management by combining mobile robotics with the power of the cloud to find, track, and move almost anything in any facility. Fetch Robotics’ solutions and services are deployed in leading distribution, fulfillment, and manufacturing centers around the world, augmenting workforces to drive increased efficiency and productivity. For more information, please visit http://www.fetchrobotics.com or follow the company on Twitter @FetchRobotics.