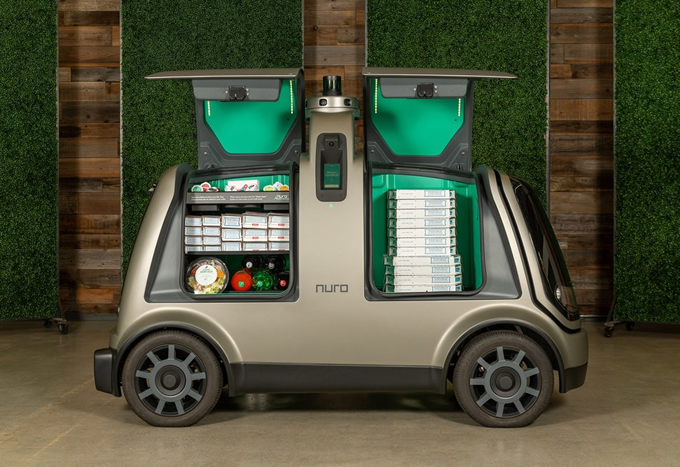 Domino's Pizza (NYSE: DPZ), the largest pizza company in the world based on global retail sales, and Nuro, the robotics company transforming local commerce, are partnering on autonomous pizza delivery using the custom unmanned vehicle known as the R2 later this year. The global leader in pizza delivery will use Nuro's unmanned fleet to serve select Houston Domino's customers who place orders online. This partnership will expand Nuro's autonomous delivery operations, which have safely and successfully been running in the Houston metro area since March 2019.

Select customers who order online from one of Domino's participating stores will have the opportunity to use Nuro's autonomous delivery. Once they have opted in, customers can track the vehicle via the Domino's app and will be provided with a unique PIN code to unlock the compartment to get their pizza.

"We are excited to expand our autonomous delivery service in Houston with Domino's delivery," noted Cosimo Leipold, Nuro's head of partner relations. "Domino's delivers millions of pizzas around the world every day, and the company shares our passion for focusing on the customer experience. We see incredible opportunity in offering Nuro's world-class autonomous technology to Domino's customers, accelerating our shared mission to transform local commerce."

Nuro is a robotics company transforming local commerce through driverless delivery. The company develops and operates a fleet of self-driving vehicles that deliver local goods of all kinds, from dinner to dry cleaning. Nuro's service helps merchants deliver goods to customers quickly, affordably, and safely. Led by world-renowned experts in robotics, artificial intelligence, computer vision, and product design, the company began making driverless deliveries to the public in 2018. Nuro has raised more than $1 billion in financing from investors including Softbank and Greylock and shares partnerships with leading brands such as Domino's and Kroger.

Founded in 1960, Domino's Pizza is the largest pizza company in the world based on retail sales, with a significant business in both delivery and carryout pizza. It ranks among the world's top public restaurant brands with a global enterprise of more than 16,100 stores in over 85 markets. Domino's had global retail sales of over $13.5 billion in 2018, with nearly $6.6 billion in the U.S. and more than $6.9 billion internationally. In the first quarter of 2019, Domino's had global retail sales of nearly $3.3 billion, with over $1.6 billion in the U.S. and nearly $1.7 billion internationally. Its system is comprised of independent franchise owners who accounted for 98% of Domino's stores as of the first quarter of 2019. Emphasis on technology innovation helped Domino's achieve more than half of all global retail sales in 2018 from digital channels, primarily online ordering and mobile applications. In the U.S., Domino's generates over 65% of sales via digital channels and has produced several innovative ordering platforms, including Google Home, Facebook Messenger, Apple Watch, Amazon Echo, Twitter and text message using a pizza emoji. In late 2017, Domino's began an industry-first test of self-driving vehicle delivery with Ford Motor Company – and in April 2018, launched Domino's HotSpots®, featuring over 200,000 non-traditional delivery locations including parks, beaches, local landmarks and other unique gathering spots.