Manufacturing and quality assurance processes in electronics production, mechanical engineering and the automotive industry increasingly require multi-axis positioning systems. At the same time, the requirements in terms of accuracy are also increasing.

Depending on the model, parallel-kinematic hexapod robots can move and position tools, workpieces, and complex components with weights ranging from a few grams to several hundred kilograms or even several tons in any spatial orientation with high precision – regardless of the assembly orientation.

The PI hexapod controller with integrated EtherCAT® interface now makes it very easy for users to integrate hexapods into automation systems without it being necessary to perform challenging kinematic transformations. This article details how the integration works, how Work and Tool coordinate systems can be used, and how the range of motion of the hexapod is optimally used.

Serial-kinematic systems consist of individual axes or actuators that build on each other, which means they are mechanically connected in series. For example, a platform-bearing Z-axis is mounted on a Y-axis, which in turn is mounted on an X-axis (figure 1).

In hexapods, all six actuators act directly on a single platform. This allows a considerably more compact setup than is the case with serially stacked multi-axis systems.

Since only a single platform is moved, which is also often equipped with a large aperture, the mass moved is considerably lower, resulting in significantly improved dynamics.In addition, hexapods exhibit higher accuracy, since they usually do not contain guides with corresponding guide errors and the errors from the individual drives do not compound. Since the cables are not moved with the platform, the precision is not influenced by corresponding friction or torques. In addition, the parallel structure increases the stiffness and thus the natural frequencies of the overall system as well. 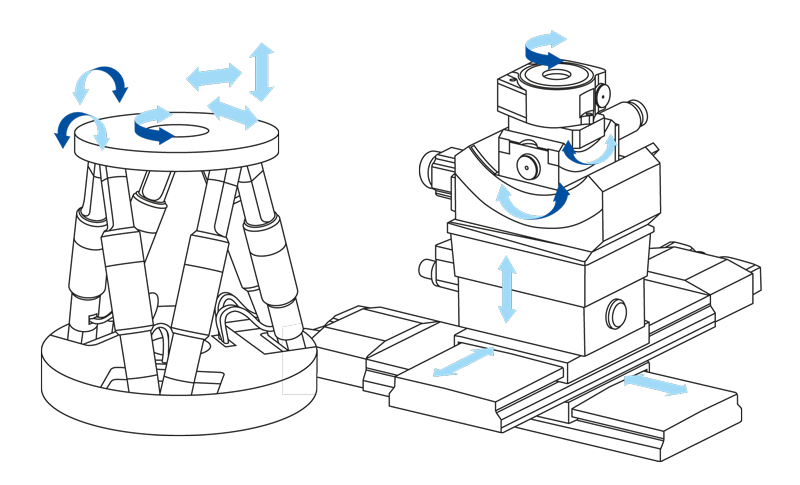 In stacked systems, however, the lower drives not only have to move the mass of the payload, but also the mass of the drives that follow, along with their cables. This reduces the dynamic properties. Guiding errors that accumulate on the individual axes also impair accuracy and repeatability.

An essential feature of the hexapods are the freely definable reference coordinate systems for the tool and workpiece position (Work, Tool). This allows the movement of the hexapod platform to be specifically adapted to the respective application and integrated into the overall process.

In a parallel-kinematic system, the Cartesian axes do not correspond to the motor axes. Coordinate transformation is therefore necessary, which cannot generally be solved in an analytical sense. Therefore, a computation-intensive, iterative algorithm is used, which recalculates the complex hexapod kinematics for each step.

Since a digital hexapod controller takes care of the calculations and controls the individual motors in real time, users have to deal neither with these complex algorithms nor with the corresponding implementations in the higher-level controller (PLC).  Shifts and rotations of the platform, as well as definition of the reference system used and thus identification of the pivot point, are simply commanded in Cartesian coordinates in the PLC.  This results in several advantages:

The PLC communicates with the hexapod via a fieldbus protocol, such as EtherCAT as in this case. As the master, it defines the Cartesian target position of the hexapod platform in the space and also receives feedback regarding the actual positions through the fieldbus interface (figure 2).

By using standardized real-time Ethernet protocols and moving the transformation calculations to the hexapod controller, the user is not dependent on a specific control manufacturer. The hexapod system behaves like an intelligent multi-axis drive on the fieldbus.

Figure 2: The control transmits and receives Cartesian coordinates on a regular basis. The typical cycle time is 1 millisecond (PI).

The EtherCAT communication is based on the CANopen over EtherCAT (CoE) protocol and therefore offers the same communication mechanisms that are defined in the CANopen standard according to EN 50325-4.  The minimum permissible cycle time for the hexapod controller is one millisecond. The Object Dictionary, Process Data Object (PDO) Mapping, and Service Data Objects (SDO) are supported.

PDOs and SDOs have been defined according to drive profile CiA402 (IEC 61800-7-201/301, figure 3 and figure 4) in order to allow easy integration of the Cartesian axes of the hexapod within the PLC. 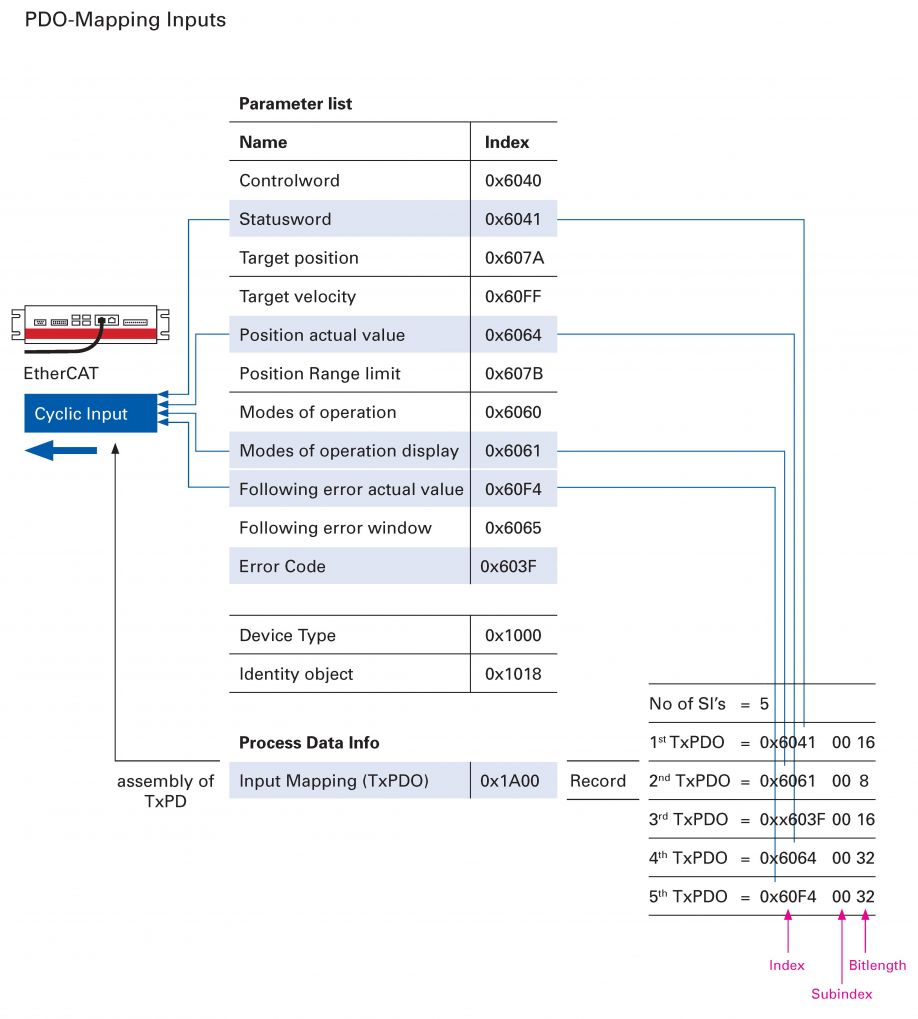 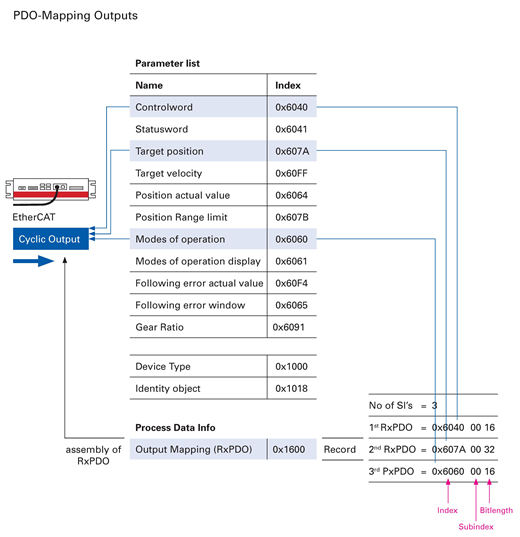 Coupling of the Axes

Since all drives act on the same platform, the statuses of the individual Cartesian axes are interdependent. Events that occur on one of the Cartesian axes affect the overall system. To counter this situation, each Cartesian axis is represented and treated as a separate axis in the PLC and the hexapod controller performs actions such as referencing or stopping the axis for all axes simultaneously. It is therefore sufficient to command such actions for only one Cartesian axis.

Error messages from one Cartesian axis are also mirrored on all other axes. However, in order not to intervene too comprehensively in the underlying standardized drive protocol, control and status words are maintained separately for each axis (figure 5). 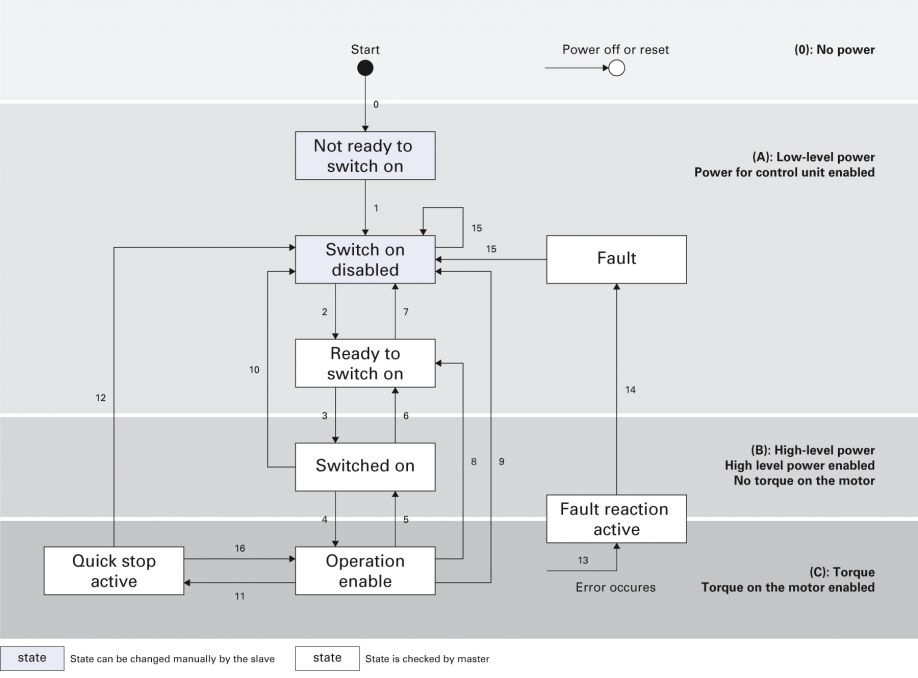 Status transitions of an axis therefore have an influence on the entire hexapod system. The axis with the lowest status level determines the status of the system. To move the hexapod to a higher status level, all axes must have reached this level at a minimum. Conversely, it is sufficient to set an axis to a level lower than the overall system in order to also set it to the lower status level. Table 1 illustrates this relationship.

Table 1: The relationship between single-axis status and the status of the overall system according to the transitions shown in figure 5 (PI).

The status of the overall system can be queried at any time via object 0x5013:01. Table 2 shows the relationship between the displayed value and the status of the hexapod system.

Table 2: Relationship between the displayed value and the status of the hexapod system (PI).

The coupling of the axes also influences the activation of the various operating modes. This is controlled via the process data object Modes of Operation (0x6060), and only the first axis (X-axis) is taken into account. In all other axes, this object has no function. The operating mode in which the hexapod system is located is displayed in the process data object Modes of Operation Display (0x6061). The current value is mirrored to the respective objects of all axes.

There is support for operating modes Cyclic Synchronous Position Mode (CSP) and Homing as defined in CiA402.

lead to tracking errors and make control more difficult. One way of avoiding large tracking errors is to reduce the target velocity and acceleration in the PLC for combined movements of the Cartesian axes. 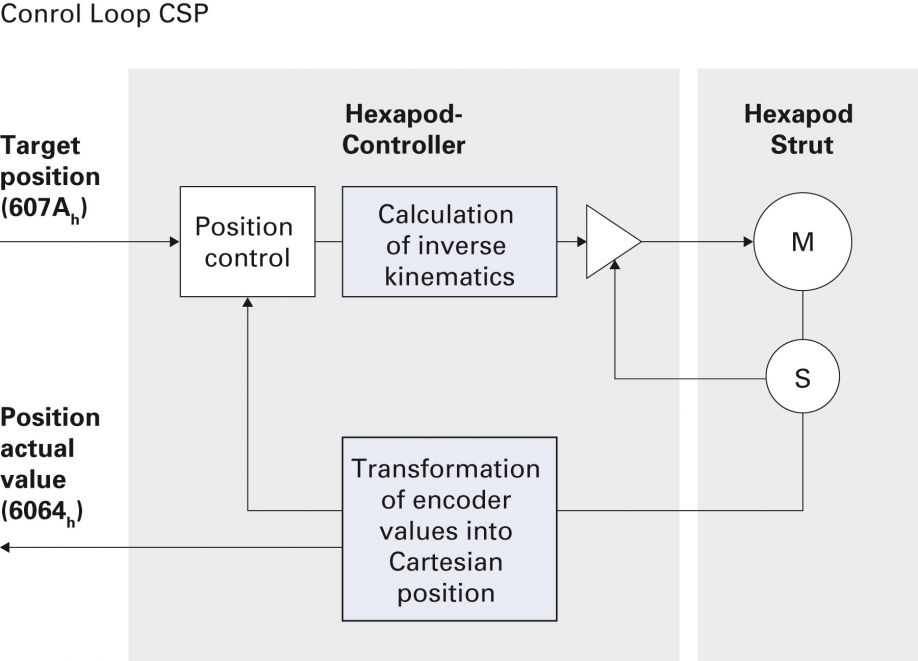 Range of Motion and Velocities

Various service data objects are available in order to avoid exceeding the vector velocity and to provide the user with the best possible support in trajectory planning.

across the workspace, only values for the point at which the hexapod was located when the query was started are determined. The values for the velocities and accelerations are displayed in object 0x5014.

The acceleration values for the translation axes can be read out directly via service parameter 0x19001502 using PI software PIMikroMove or PITerminal. This can be done during initial commissioning, for example.

For the rotational axes, the maximum acceleration can be determined by transferring the ratio for linear axes. 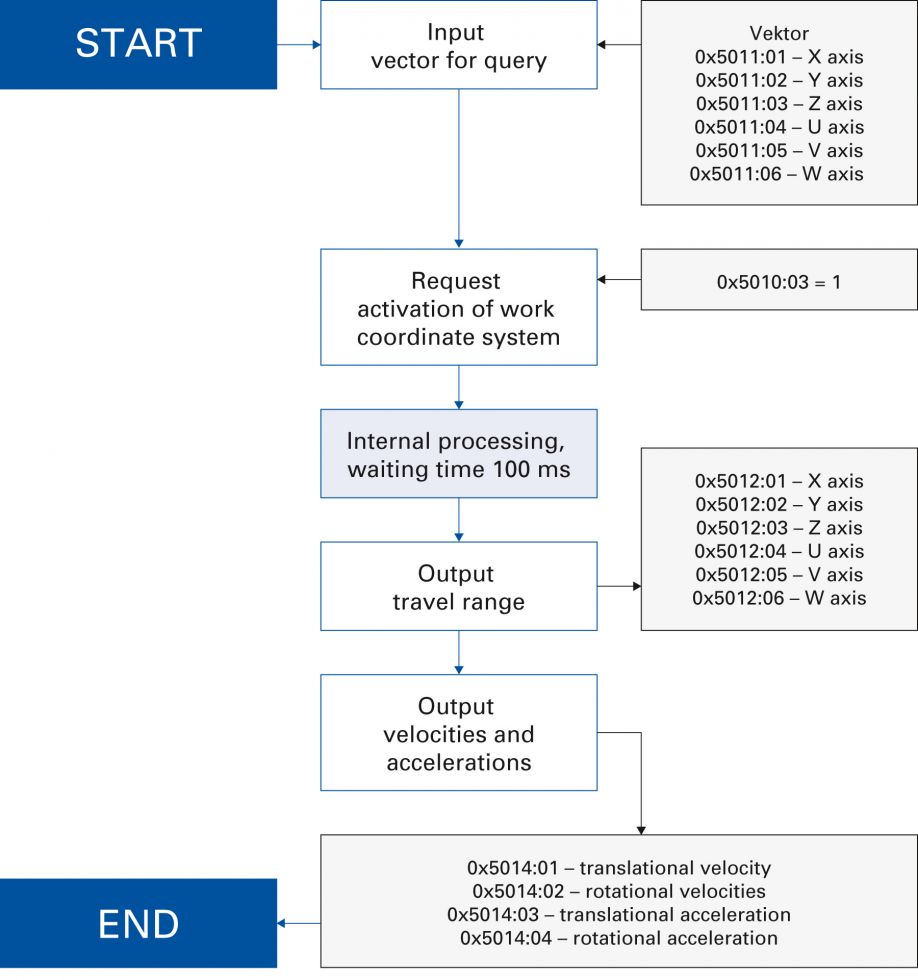 The intelligent hexapod controller allows the user to freely define and select reference coordinate systems for movement in space, and thus, to control the movement of the hexapod for the respective application in the best possible way.

Object 0x5000 is available to the user for configuration of the Work coordinate system. The sub-indices correspond to the coordinates of the individual Cartesian axes. The Tool coordinate system can also be configured via object 0x5001. All values must be specified in micrometers or thousandths of a degree.

A change in the coordinate system configuration can affect the available range of motion and velocities. Therefore, the parameterization of the individual movements must also be adapted. 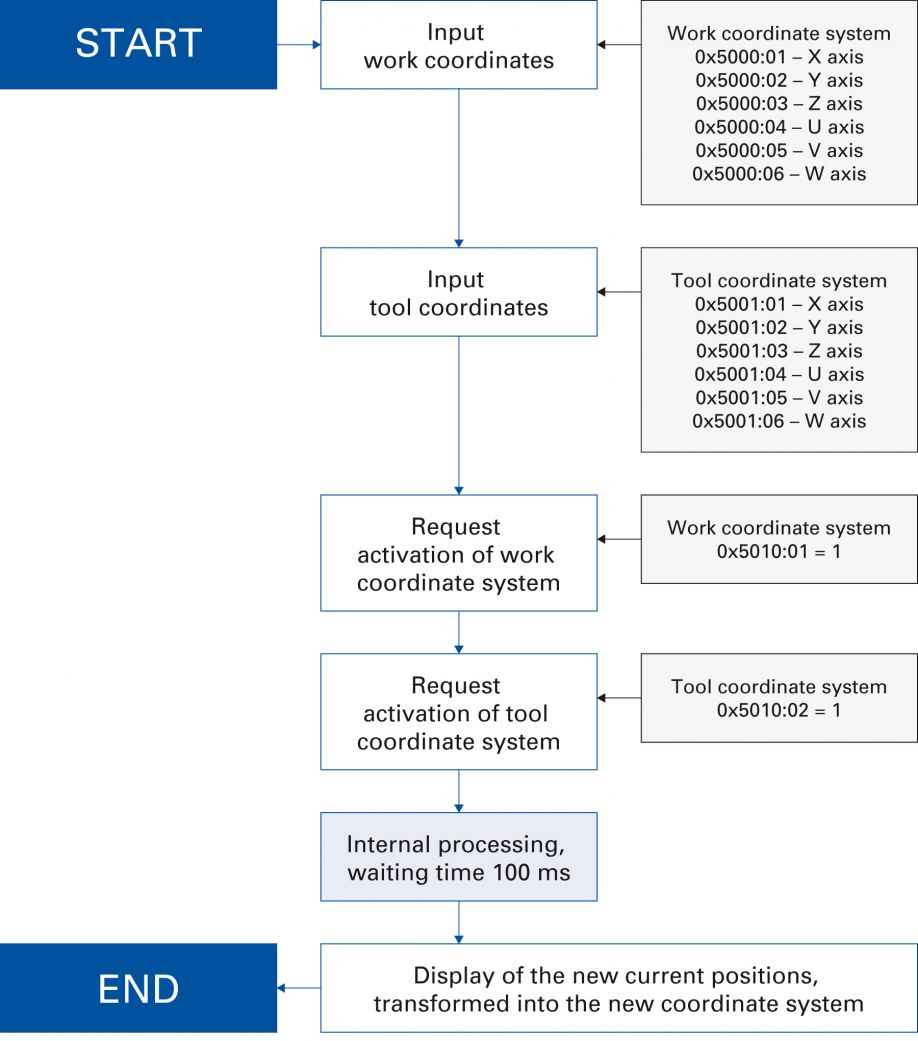 The Homing operating mode is used to perform a referencing run to the motor axis zero points that define the Cartesian zero point of the hexapod platform.

Since the PI portfolio includes both hexapods with absolute measuring sensors and hexapods with incremental measuring systems, all information regarding the referencing method and zero points is only used within the hexapod controller to calculate an absolute actual position for the PLC. Therefore, referencing is always performed as drive-controlled Homing. The necessary parameters for configuration of the referencing run are already stored in the hexapod controller. The PLC only has to start and stop the

A cycle time of one millisecond results in a dead time of 14 milliseconds. In addition to calculation of this time, empirical optimization is recommended.

If a quick stop is requested during a movement, such as in the context of an emergency stop of the system, the hexapod is brought to a standstill with the maximum possible deceleration. The integrated path interpolation ensures that the hexapod continues to move on the previously requested path.

The initial commissioning of the hexapod system should always be carried out via the PI software. All required parameters are also queried and can then be transferred to the PLC. Ethernet and RS-232 interfaces are available on the hexapod controller.

Even with the EtherCAT interface activated, it is possible to send GCS commands at any time via the Ethernet and RS-232 interfaces on the hexapod controller. However, as soon as the individual axes are set to the status Operation enabled by the PLC, all GCS commands that command or stop a movement, as well as commands that result in a change of the displayed current position, are blocked.

Details on commanding with PI’s own GCS command set can be found in the relevant manuals and user documentation.

Dr. Steffen Schreiber is Senior Expert on Hexapod Development at PI.  He has been working for many years with fieldbus systems, especially EtherCAT. He is driven in particular by the challenge of optimally integrating parallel-kinematic systems, such as hexapods.

Physik Instrumente L.P. (PI) is a leading manufacturer of nanopositioning, linear actuators and precision motion-control equipment for photonics, nanotechnology, semiconductor and life science applications.   PI has been developing and manufacturing standard and custom precision products with piezoelectric and electromagnetic drives for over 50 years.  The company has been ISO 9001 certified since 1994, and with more than 350 granted and pending patents, provides innovative, high-quality solutions for OEM and research.  PI has a worldwide presence with 10 subsidiaries and over 1,300 staff.