The Next Generation of Robots

ST Robotics has been making robot arms for 30 years but the fact is robot arms are very limited in what they can do. They are basically machines that, once programmed do exactly the same thing over and over. They are versatile enough that the same robot can do a vast range of different tasks and moreover can be re-programmed to do a different task at any time. But we are moving to a world where robots need to make intelligent decisions about what to do based on what they see. Hence the need for machine learning, vision and AI.

AI and machine learning are often confused. Most AI works by comparing a complex input (like an image or a voice) with a data base of similar matches. These data take ages to build and label usually with 1000s of images used to compare. The input, ie a camera image, is then captured, usually with a box drawn around it. It is then compared to the huge database in layers of a neural network until a desired output is reached and a decision can be made. This is not quite the same as machine learning where the machine acquires its own data or changes what it has. The machine might be teaching itself from its experience of the real world or may be assisted by a human operator.

Steve Wozniak has dismissed AI as not coming near real intelligence. “AI doesn't even have the intelligence of an ant; we are simply working at the limits of what computers can do.” And while he is right ST Robotics and many other companies are now working at these limits to make robots that can actually make intelligent decisions about what they do and what to do next. Some are fairly simple, like the Roomba but there are autonomous AI powered robots that will mow your lawn. They don't have to be quick – leave them to get on with it; come back later and it's done. And overnight too!

ST are developing autonomous robots for crop harvesting. We are currently working on a robot to harvest asparagus and are about to start a project for picking grapes. Both these systems need a vision system that can recognize the asparagus spears or bunches of grapes and harvest them the way a human being would do. This is a completely different approach from farm machines with rotating blades and so on pulled by tractors. Such techniques are unsuitable for delicate crops like asparagus that can only be picked by the human – or robot – hand.

Another example is the Dogtooth robot that picks strawberries. ST Robotics licensed the R12 robot arm to them to get them started. They are now going on to large scale production. 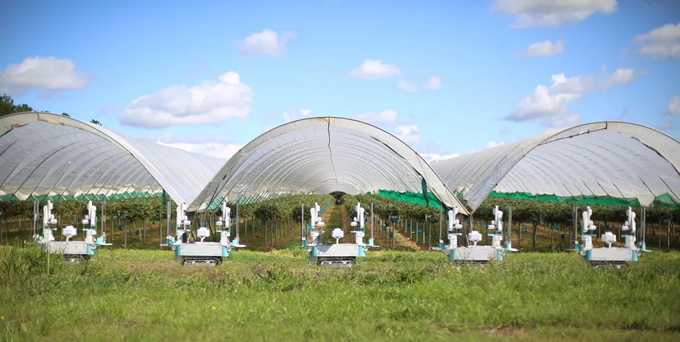 Like ST's Asparacut the Dogtooth robots rely on sophisticated vision with multiple cameras.

Joseph Engelberger  once dismissed vision as unnecessary, writing “I don't expect to see a Ford coming down a Chrysler line” (or something like that!). But such a repetitive product doesn't appear in the natural world. For example the ST Robotics GUS robot harvests living asparagus. Asparagus spears grow in random places; they can be tall, short, bent and different colors. The robot has got to recognize it for what it is, make decisions about quality and shape and know exactly where it is and where to cut it.
Autonomous robots need to be self navigating (by definition). Dogtooth and others may use GPS. ST's approach is more like a space craft (I can't reveal how we do that due to IP confidentiality). It means our robot can navigate down between asparagus beds or rows of vines. Intelligent suspension keeps the robot level.

Agricultural robots can't use surroundings as a means of location. Back in 1989 we designed an autonomous robot that could find its way around a factory floor, building a map as it went along using ultrasonics and a flux-gate compass. Of course, factory machines don't change their shapes and are in fixed predictable positions; plants are not. Alas back then it was viewed as a crackpot idea and got no interest. (never invent something too soon!)

The ST platform is designed to harvest the way a human being harvests and can be adapted to any crop from asparagus to cannabis.