How did you get interested in the intersection of human locomotion and robotic exoskeleton and prostheses?

Two great teachers and a desire to help people. In high school, I had the amazing opportunity to take a course on robotics and automation from a teacher named Mike Pierno. Our school was on the outskirts of Detroit where Mr. Pierno had worked in the auto industry, so he was able to arrange the donation of some real machining and robotics equipment for our class. Setting up logic circuits with hydraulic cylinders, milling metal components for our course projects and so on forever changed me; that class made me an engineer. In college, I had an incredible dynamics professor, Andy Ruina, who got me interested in walking robots. Seeing videos of the ‘passive-dynamic’ walking robots he and his students had built, I knew I wanted to build one too. In Andy’s lab that summer I built a robot that walked with human-like movements despite having no motors or computers. That project led to my first publication and again transformed me; it made me a scientist. At graduate school, I wanted to use the techniques that had made our robots so efficient to more directly help people. One of the keys had been the design of their ankles and feet, so I started making new types of ankle-foot prosthesis for people with lower-limb amputation. Slowly over the past fifteen years I’ve been getting better at understanding the nature of the problem and designing devices that really help people. 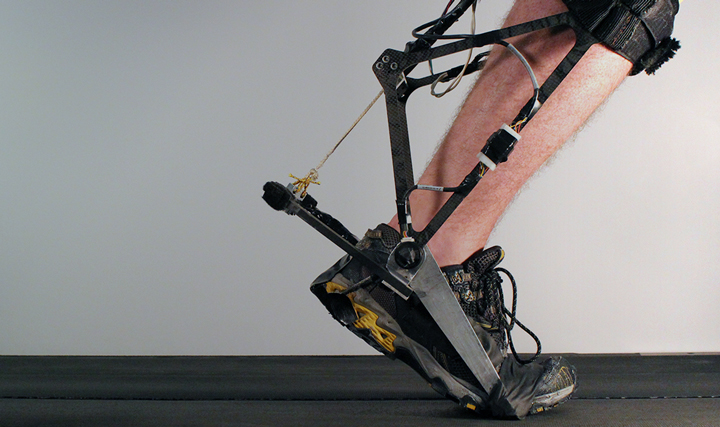 Why is it so difficult to make walking more efficient in humans?

There are a few challenges. People are highly complex, in the dynamics of our movements, in our hundreds of muscles and tendons, and in our wildly complex nervous systems. This makes it very difficult to predict how a person will respond to some new device. Compounding the challenge, everyone is different, and those difference matter; an exoskeleton that makes walking easier for you might make walking harder for me, and we’ve seen this in our experiments. We are also all constantly changing, especially when we’re learning to use a new tool like an exoskeleton. All of this means that, despite our strong feelings of intuition, we really do not know what an exoskeleton should do to assist its user.

Why have exoskeletons not been as effective as they could be?

Most people designing exoskeletons have not recognized these challenges. They’ve started by assuming they know what the device should do to help the person, then spent years making a specialized prototype that does just that, and nothing else. (This includes my own first efforts in prosthesis and exoskeleton design.) As a result, our field has invested heavily in projects that have mostly not resulted in effective devices. The few exoskeletons that have worked have delivered only modest benefits compared to what we think should be possible. That’s why we’re taking a different approach to exoskeleton and prosthesis design.

Are there similar locomotion challenges with both humans and robots?

Bipedal robots face different obstacles. We have much better models of robotic components than human bodies, which makes things easier. For example, the energy consumed by an electrical motor for a particular voltage and current is very well characterized, whereas a muscle’s energy consumption seems to have complex dependencies on its electrical state, its length and velocity, the way it’s been used recently, chemical dynamics within the muscle, and temporal patterns of activation, in ways that are still not completely understood. On the other hand, exoskeletons can rely on the person using them to help with parts of the task that are tricky, which is an advantage. For example, even our best robots have a tough time maintaining balance in new environments (see the DRC blooper reel for examples). The person using an exoskeleton will usually quickly make adjustments for a new environment, say on uneven ground or a sandy beach, whereas the humanoid robot would have to figure that out very quickly or fall down. So both problems are tough, and progress has been slow in both domains, but the fundamental challenges are different.

What is significant about your latest research findings?

We think human-in-the-loop optimization methods like the one we’ve demonstrated will change the way exoskeletons and prosthetic limbs are designed. Rather than guessing as to what the exoskeleton should do, these algorithms systematically and continuously determine what the device should do to best assist an individual user. That means they can discover new types of assistance, customize assistance to individual users, and co-adapt with the user as they learn and grow. In our experiment, we showed that this approach results in much larger improvements in human performance than hand-tuning: energy economy was improved by 24% with optimized assistance from an exoskeleton on one ankle, whereas our best hand-tuned design only reduced energy cost by 6%. This is a larger benefit than with any other exoskeleton, including devices acting at both hips and both knees. We think that optimizing other exoskeletons, orthoses and prostheses could lead to similar improvements, without any increase in cost. We also think that this approach will dramatically speed the development of new types of exoskeletons and prostheses. And finally, we think it will greatly improve the prescription process, both for active and passive devices. So, I’m admittedly biased, but I think that this is the most important breakthrough in exoskeleton and prosthesis technology of the last ten years.

What range of (human) audiences can benefit from these findings?

Exoskeletons and prosthetic limbs using this technology could help people with disabilities arising from stroke, amputation or aging to walk farther, faster and with fewer falls. They could also be used by people who need to walk long distances, like aid workers, or for recreational athletes, for example a person who wants to run a marathon with their friends but doesn’t have time to train.

How can these findings inform research in other areas of robotics?

Human-robot interaction has been identified as an important development area in robotics (see, for example, the NSF National Robotics Initiative). Methods like this may guide the development of robots that cooperate better with humans, thereby improving a wide range of robotics technologies.

Learn more in this Science Paper 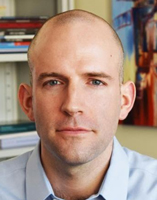 About Steve Collins
Dr. Steve Collins is an Associate Professor in the Department of Mechanical Engineering and the Robotics Institute at Carnegie Mellon University. He is director of the Experimental Biomechatronics Laboratory, organizes the CMU Bipedal Locomotion Seminar, and teaches courses on Design and Biomechatronics.
He is a member of the scientific board of Dynamic Walking, a recipient of the American Society of Biomechanics Young Investigator Award, and the student-elected Department of Mechanical Engineering Professor of the Year.
His research uses a combination of mathematical models, experimental robots, and biomechanics experiments to aid the design of biomechatronic devices for human rehabilitation, assistance, and augmentation. He collaborates with clinicians, medical doctors, and entrepreneurs to find opportunities for research with immediate applications.