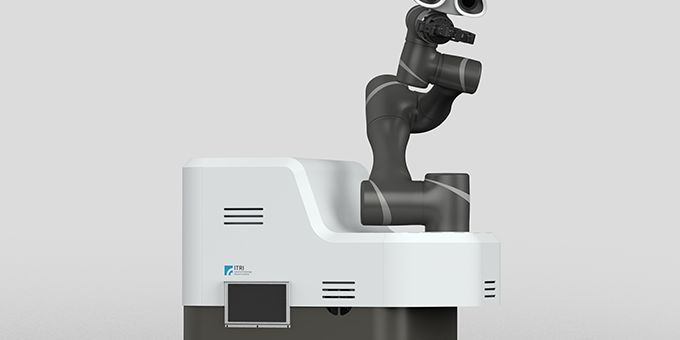 Tell us about MARS and your role with the company.

As Deputy Manager at ITRI, my role is to help carry out ITRI’s mission to innovate a better future for society (including the transformation of industry from labor-intensive to innovation- driven). More specifically, as related to the innovation of technologies like MARS, this requires my team to identify situations where technology can benefit the workplace. In response to the growing demand for improved robotic assistance in industry sectors such as retail and light industry, we created MARS, the Mobile Arm Robot System, a robot with more sophisticated autonomous navigation and inspection capabilities.

What is it that you feel makes MARS unique?

What makes MARS unique is its superior ability to plan and execute the task to which it is assigned. To begin, MARS can create and edit a map of its environment and from that map it configures its loop route and establishes its repeating mission. MARS’ Lidar and depth vision sensors allow MARS to navigate around the environmental obstacles it has identified in this map. When given an assignment such as inventory checking and shelf tracking, MARS’ advanced AI vision allows it to not only generate out-of-stock notifications and replenishment lists, but also to recognize and remove misplaced items. This is a key breakthrough. It can use its advanced AI vision to accommodate other tasks as well such as precise object retrieval. MARS is extremely well-suited to work alongside people due to its speech system, collaborative robotic arm design, and its excellent obstacle (and people) avoidance system.

Can you share some examples on how MARS can be used in various applications such as retail, warehousing, and light industry?

Retail, warehousing and light industry all need service robots with autonomous mobility and inventory robots to reduce labor costs. Some examples of its applications are:

What technology does MARS use to establish its routes?

While moving, MARS fuses information from its Lidar and depth vision sensors and employs its navigation ability to establish route planning and avoid the environmental obstacles it has identified in the map it has made.

What technology is used in MARS’ obstacle avoidance capability?

MARS uses its 2D and 3D sensors as well as its 360° Lidar to identify people or obstacles in its way. With its excellent navigation ability and suspended two-wheel drive capable of fast linear response and rotation, MARS deftly maneuvers around or stops to avoid a collision.

MARS features an adaptable gripper for adjusting positions, speed, and power for customized uses. It is also compatible with the Robot Operation System (ROS), which allows for secondary development including AI vision, platform drive, arm flexibility and more.

When will MARS be commercially available?

ITRI’s MARS is currently available for academia and research institutes upon request. We are looking for potential partners to create commercially ready products. Interested companies can contact ITRI at https://www.mars-robotics.net/contact or Yen Chia Peng at peng0148@itri.org.tw.

Give us your vision on how you see robots like MARS working along with rather than replacing humans in the workplace.

MARS relieves people in the workplace from repetitive, yet necessary tasks. For example, in a retail environment, MARS’ shelf-tracking ability includes not only the generation of out-of-stock and replenishment lists, but also the identification and removal of misplaced items. This means the personnel in that retail store are freed from tedious work and can therefore focus on more important activities like customer service and sales.

About ITRI
The Industrial Technology Research Institute (ITRI) is one of the world’s leading technology R&D institutions aiming to innovate a better future for society. Founded in 1973, ITRI has played a vital role in transforming Taiwan's industries from labor-intensive into innovation-driven. It focuses on the fields of Smart Living, Quality Health, and Sustainable Environment.