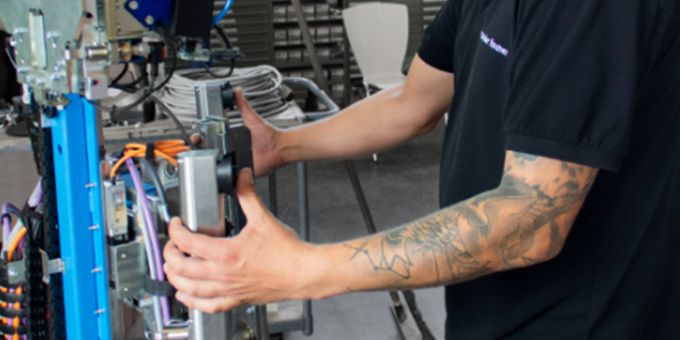 What happens when *Swabian inventive talent and *Baden (* two regions in Germany) pioneering spirit meet? The result is a top-class handling project for the automotive industry.

EFS Gesellschaft für Hebe- und Handhabungstechnik mbH is the name of an already experienced Swabian company with inventive talent from Nordheim near Heilbronn, Germany. EFS, is a globally active company in the field of handling technology and sees itself as a technology driver for partially and fully automated handling devices in the automotive industry, among others. From the suspended transport of components to partially and fully automated assembly systems, EFS has been offering its customers innovative turnkey solutions on site for more than 20 years. The clamping element specialist Zimmer Group from Rheinau, Germany, has often demonstrated its pioneering spirit : most recently, the company demonstrated this spirit with its product LKE used in this project - currently the only electrical clamping element for profile rail guides available on the market. But first, let's take it one step at a time:

From pneumatics to the electrical system

For decades, pneumatics has been the predominant technology in this handling system. Against the background of an increasing number of variants in the assembly line and ever more important sustainability, the desire of the automobile manufacturers is to break new ground in the direction of electrification/electromobility or digitalization of process sequences. This new development also focuses on the use of resources and, above all, their flexibility. Due to increased requirements with regard to production processes that will change more rapidly in the future and new product series that cannot yet be defined in terms of either scope or size, a system has been created that meets the system requirements and is future-proof. "The requirement to depict variants and vehicles in the plants that are not yet known is increasing. It is necessary to think about electrification, where the assembly processes can be played back by the targeted use of sensor technology, thus accelerating the "commissioning strategy". It is important for us that the customer can adapt our systems to changing vehicle doors, i.e. set them up and implement them himself," says Aaron Geenen, head of development at EFS, underlining his approach. 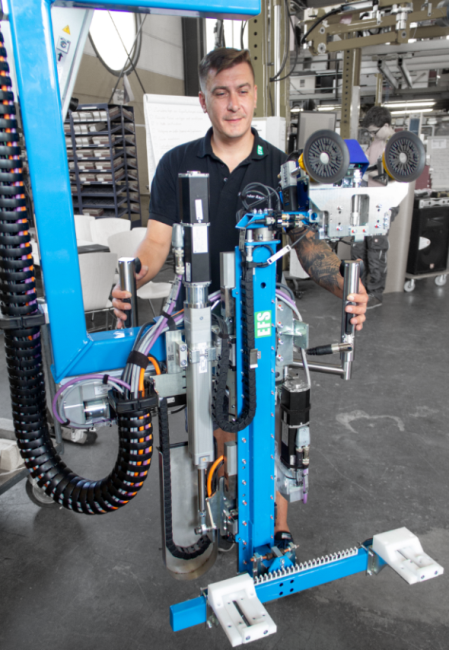 The worker can transport the door to the vehicle via the XY rail or via the lifting system and install it there.

As already mentioned at the beginning, the new handling system incorporates several LKE clamping units from the Zimmer Group, which are mounted on a linear guide. Entirely in keeping with the spirit of a future-oriented solution, these fast electrical clamping elements - in contrast to a pneumatic solution - are particularly impressive with their integrated status query (open/closed), which is output via safety-related digital status signals. The kinematics are provided by an eccentric shaft with mechanical self-locking (bistable). Due to the self-locking functional principle, the full holding force is maintained in the closed state even in the event of a power drop or in a currentless state (e.g. when the system is switched off) and the exact position is ensured. Due to their electrical mode of operation, they can be used wherever power is available and therefore do not require additional pneumatic or hydraulic supply. 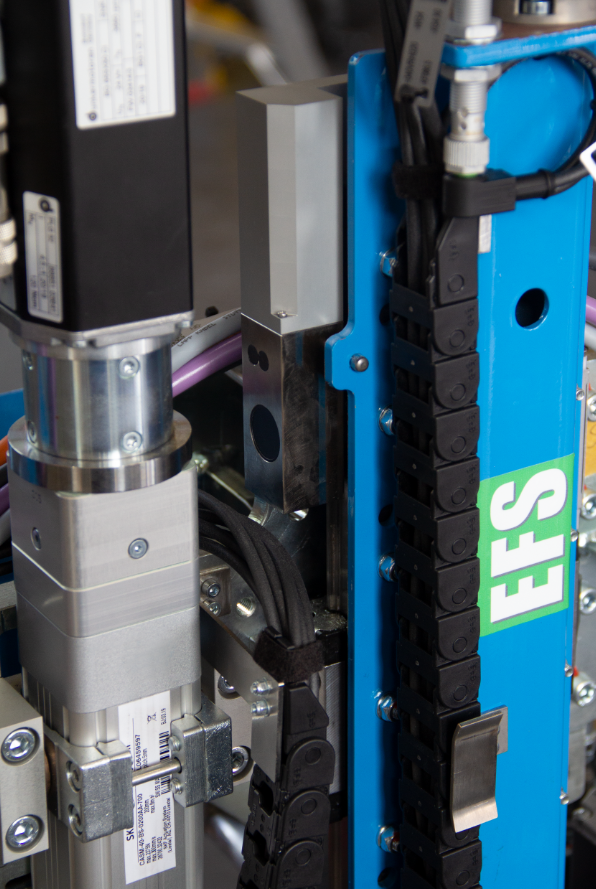 The handling system contains several LKE clamping units from the Zimmer Group, which are mounted on a linear guide.

EFS deliberately relies on a partially automated system. According to Mr. Geenen, a "skills-based division of tasks" is thus possible. In many areas, human beings are superior to a fully automated, robot-supported handling device in this respect due to their cognitive abilities. For example, in a joining process with all its tolerances and deviations or when inserting a door, the human being performs highly efficient work. However, automation makes sense for cycle-time relevant processes with superimposed motion sequences. "Other advantages compared to full automation are the fewer adjustment processes and the relatively lower operating costs," Geenen continues.

The newly developed door installation device is very flexible and can be pushed very easily - similar to a workshop trolley - by hand to the body. Afterwards, the device is driven to the corresponding door. A suction unit with gripping mechanism lifts the door (partially automated) out of the door frame. The Zimmer Group's clamping element holds the door in a safe position, allowing the operator to perform various functions on the gripper. For example, different travels can be realized and enables the operator to carry out different movements within the assembly of a car door.

Compared to the electric drive, the electric clamping element absorbs increased forces in the closed state and secures the position without energy without displacement. This relieves the drive and allows it to be switched off in the positioned state. This results in advantages in the design of the drives and the energy balance, says Stefan Heiland, Product Manager at Zimmer Group, describing the advantages of the LKE series in this application.

The worker can transport the door to the vehicle via the XY rail or the handling system and install it there. All degrees of freedom are implemented and can therefore cover a large number of variants (compared to conventional handling devices). Using a touchpad located on the handling device (see photo), each step can be selected individually, quickly and easily and adjusted accordingly, e.g. the up and down position as well as other process parameters.

"The flexibility of the Zimmer clamping elements and the fact that they can be easily controlled via digital signals thanks to their integrated electronics were of great advantage for our new system," says Geenen. "Also, the fact that the status achieved by the LKE series, thanks to its integrated logic, is transmitted to the control system via a simple communication interface in a safety-oriented manner," adds Geenen.

The handling system is fully adaptable, i.e. it is able to adjust individually to each door variant. The corresponding values for this are communicated to it by the master control system and it can thus set up or adjust itself accordingly. A further benefit of the semi-automated system is that the assembly process itself is less prone to errors and faults because the parameters are stored in the control system and the assembly staff is relieved with a large number of variants. 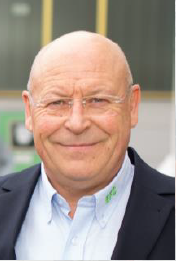 Mr. Göller (photo), the commercial director of EFS, is extremely positive about the cooperation with the Zimmer Group. "EFS has been a Zimmer customer for a long time and has been using these components for decades. We attach great importance to renowned manufacturers, flawless components, availability and sustainability and therefore we feel that we are in good hands with Zimmer".  So it can be assumed that the cooperation between the Swabian inventors and the Baden pioneers will lead to further projects in the future.

Thanks to its electrical design, the LKE series is particularly suitable for use in sensitive areas such as electronics production, medicine, pharmaceuticals and healthcare, as well as in the automotive industry. This is because, unlike its pneumatic counterpart, there are no impurities or dirt particles that can penetrate from the electrical clamping element into the system.

With over four thousand products and more than twenty years of development and market experience, the Zimmer Group is the world market leader in linear technology and in the field of clamping and braking on profiled and round shaft guides. These can be very easily calculated and selected in the catalogue or via the company's own online configurator at https://www.zimmer-group.com/en-us/service/pre-sales/product-finder/clamping-and-braking-elements. 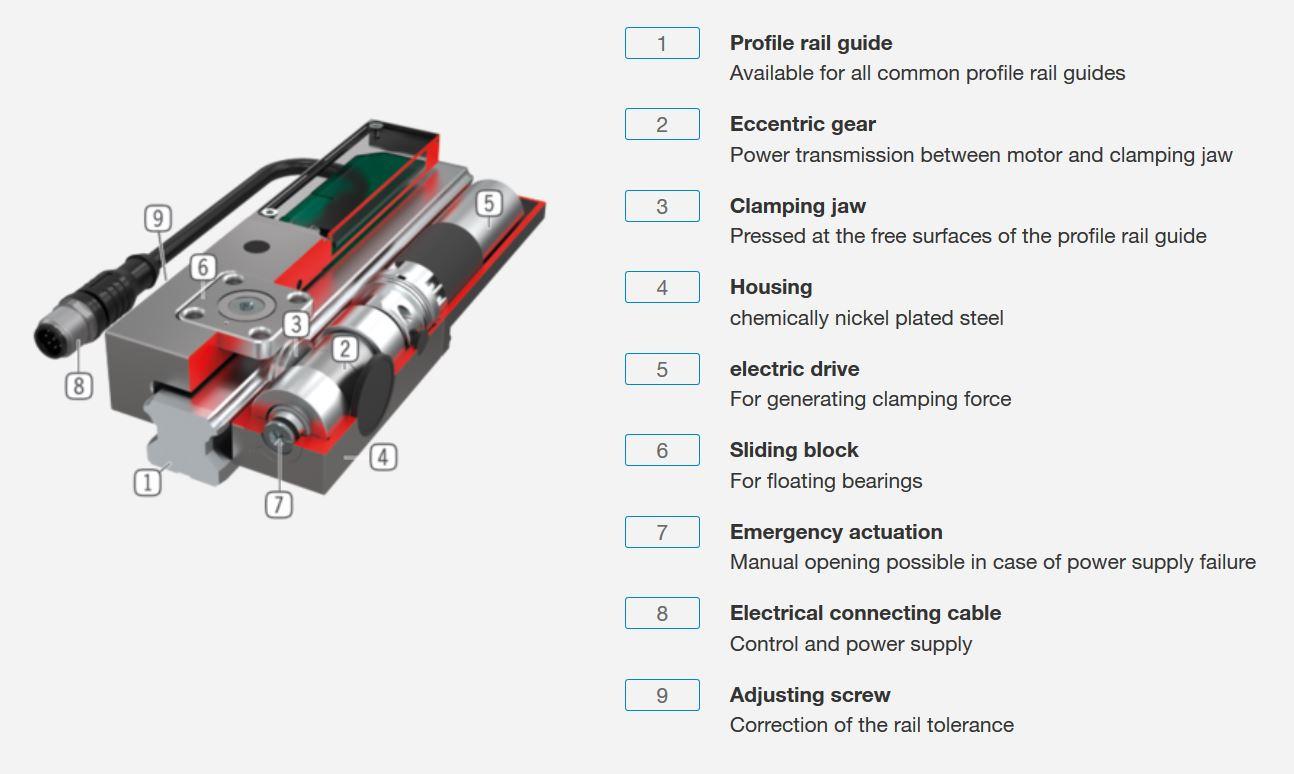