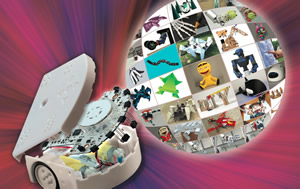 Erico Guizzo for IEEE Spectrum:  The latest issue of the IEEE Robotics & Automation Magazine features a special report on open-source robotics hardware and its impact in the field. We’ve seen how, over the last several years, open source software—platforms like the Robot Operating System (ROS), Gazebo, and OpenCV, among others—has played a huge role in helping researchers and companies build robots better and faster. Can the same thing happen with robot hardware?

It’s already happening, says robotics researcher and RAM editor-in-chief Bram Vanderborght, who explains that building hardware has gotten much easier thanks to things like 3D printers, laser cutters, modular open electronics kits, and other rapid prototyping and fabrication techniques. And while “open-source robotics hardware is taking longer to catch on” compared to open-source robotics software, he notes that “several impressive examples exist, taking advantage of benefits of those novel rapid prototyping possibilities.”

In the field of robotics, there has existed a relatively large void in terms of the availability of adequate hardware, particularly for research applications. The few systems that have been appropriate for advanced applications have been extremely costly and not very durable. For those and other reasons, innovation in commercially available hardware is extremely slow, with a historically small market and expensive and slow development cycles. Effective open-source hardware that can be easily and inexpensively fabricated would not only substantially lower costs and increase accessibility to these systems, but would drastically improve innovation and customization of available hardware.  Full Article: