5 things to know about the DARPA Robotics Competition 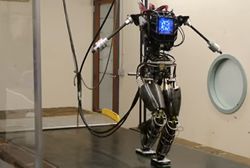 From Lyndsey Gilpin  for TechRepublic:  The DARPA Finals will be held in Pomona, California from June 5-6, and the robots that come out of it could make some big impacts (or take over the world). Here's a summary of what you should know.  1. It began with the desire to improve humanitarian assistance and disaster relief The Fukushima disaster in Japan in 2011 was an inspiration for the competition, according to Dr. Gill Pratt, the DRC program manager. The team realized we never know what the next disaster will be, but we need technology to help us better address these types of disasters with better tools and techniques. And robots have massive potential.   "The particular part that we've chosen to focus on, here, is technology for responding during the emergency part of the disaster during the first day or two," Pratt said in a media briefing several weeks before the competition. "So this is not about, for instance, robotics for doing the restoration of the environment many, many weeks, years after the disaster, but rather the emergency response at the beginning."   Cont'd.. 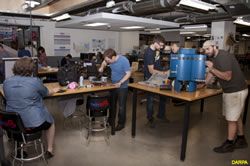 05/18/15, 10:03 AM | Industrial Robotics, Other Topics | Awards, Darpa
Winners created compelling short videos about the future of robots in society and will get the chance to discuss their ideas and see current cutting-edge robots in action

"True to DARPAs mission, EXACTO has demonstrated what was once thought impossible: the continuous guidance of a small-caliber bullet to target," said Jerome Dunn, DARPA program manager.

DARPA Shares Its Vision for the Future