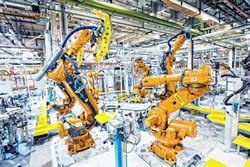 The Engineering and Physical Sciences Research Council (EPSRC) has announced the launch of a new robotics network that aims to foster academic and industry collaboration. The UK Robotics and Autonomous Systems Network (UK-RAS Network) will have a strong academic foundation, with a number of universities acting as founding members. According to the EPSRC, the network has already received strong support from major industrial partners, as well as from professional bodies such as Royal Academy of Engineering, IET, and The Institute of Mechanical Engineers. Globally, the market for service and industrial robots is estimated to reach $59.5 billion by 2020. A primary aim of the network will be to bring the UK’s academic capabilities under national coordination, fuelling innovation in the robotics sector and taking advantage of the growth in the industry.   Cont'd...

Stäubli is a pioneer in the construction and development of robotic tool changing systems. Our customers benefit from our many years of expertise in all industry sectors, as well as our modular product concept, which offers three efficient solution paths: MPS COMPLETE offers preconfigured robotic tool changers for immediate use. MPS MODULAR allows the user to determine the configuration, while MPS CUSTOMIZED allows the construction of special, application-specific systems.
More Industrial Automation, Robots and Unmanned Vehicles Products | Feature Your Product