How robotics and automation are helping to deliver resources and healthcare, medication, treatments, assisted living care to the elderly population—how robotics can monitor senior patients and communicate with clinicians etc.

There is clearly an ageing phenomenon ahead of us. Can technology help in every stage of our lives?

Yes, and it’s already happening. From young people to elderly people. Technology is a connecting medium, finding the fastest route between two points, creating more productive solutions to life’s technical, social and economic problems. Young people can learn about new developments from the internet in minutes if not seconds, stream live video from their mobile devices etc. Business people are contactable at virtual any place in time and can negotiate from remote locations. Our health is mostly data and information technology, which is opening new possibilities of what can be done with AI and machine learning. As I’ve seen firsthand, the elderly can benefit immensely from cognitive assistance and digital monitoring.

What can we learn from Japan, where they are already in the middle of an ageing population crisis and focusing on robotics to assist their elderly population?

When talking about demographics, we must acknowledge the inverted pyramid phenomenon. With this thinking, it will require us to develop more assistive technologies to expand upon the level of human care. Without semi-autonomous robotics or other sensory information processing systems, people with disabilities or seniors will not be able to get the care they need or deserve. I’m counting on big data and IoT, robotics and artificial intelligence, in combination, to contribute significantly for a better quality of life for all ages.

What are social assistive robots (SARs)?

SARs result from the crossing between Social Interactive Robots (SIRs) and Assistive Robots (ARs). SIRs are robots that are programmed to interact and communicate with humans through Human Robotics Interaction (HRI). On the other hand, ARs are robots used for physical assistance.

SARs are robots that provide aid or support to a human, mainly programmed for interaction with vulnerable groups. Their emphasis is based on the outcome of HRIs as it pertains to rehabilitation, convalescence, motivation, coaching and learning. The goal is to create a close proximity and a level of “confidence” to interact with people when assisting or delivering care.

Can you give us practical examples of how SARs can help in elderly care?

SARs may help to deliver supervision, cognitive assistance, entertainment, therapy and companionship. Due to natural time and energy limitations, it is extremely difficult, if not impossible, to have dedicated caregivers working around the clock, monitoring every single elderly patient in a home or facility.

Additionally, human beings have documented shortcomings when it comes to sensing abilities and first-hand experience. See, humans have five senses: vision, hearing, touch, taste and smell. Currently, every one of those senses is better than a machines sensory capabilities, not to mention machines cannot process common sense nor do they possess emotional intelligence. But, before we give humans the trophy, consider this. Robots can be programmed with skin galvanic response, night vision and can store and analyse high volumes of human silhouettes. Computers inside robots are superior at processing big data and pushing out quantitative analysis for pattern recognition.

SARs could also be teleoperated to reinforce supervision scenarios, where human operators control robots in a remote location. Such tasks could include checking if elderly people take their medications on time, monitoring how they are feeling and allow doctors to converse with their patients. Family members could also connect to the robot itself and establish a videoconference (e.g. family reunion).

Do you see resistance from the elderly population when it comes to trusting a robot to help them?

This is a complex subject matter. It involves understanding a conceptual idea that I have introduced as “robotic presence.” The notion of robotic presence is translated into terms of aesthetics, how the robot looks, but also in terms of multimodal interfaces, the input and output of data. For example it would be difficult for an elderly person, or any person for that matter, to be comfortable around a machine with branching wires and cold metal plates. In terms of multimodal interfaces, resistance will lessen if the robot can hear you through speech recognition, recognize your face and gestures through image and signal processing, respond back to you in your native tongue. When these elements are well calibrated elderly people are more likely to interact, and disclose information. Any deficit in one of these areas can omit the full potential of social assistive robots when delivering care.

Robots are also being used in surgeries, how do they work?

Essentially, semi-autonomous surgical robots are teleoperated by a surgeon using a joystick and stereoscopic displays. The surgeon controls the robot, somewhat like first-person videogame mode, by watching the operation through high definition video and controlling a robotic arm to perform the surgery. The robot has a high level of accuracy, repeatability and efficiency. As an example, the da Vinci Surgical System (sic) is mainly used in prostate and breast cancer surgeries.

How do you see the integration of technology in elderly care?

It must be progressive yet sensitive. The current elderly generation is not tech-savvy and so using basic computers or electronic devices is a foreign concept. However, future generations will have already consumed and appreciated technological innovation at various touch points in daily life. We want to move patients from a spectrum of passive to participative over time. But, to do so, this process requires an ethical approach that establishes trust.

Looking forward can you describe a scenario that would represent your vision of an assisted living center of the future?

The future of assisted living may come to have various models of assistive robots, all of which would be equipped with sensors that could monitor an elderly person in real-time and notify the appropriate parties proactively, where levels were to spike or a symptom were to arise. Technology-enhanced senior care will be paramount. Telepresence platforms would establish contact between the patient, doctors and caregivers. SARs will be able to support cognitive assistance by reminding individuals about medication, intakes and occupational therapy. SARs could also introduce cultural games or physical games with participative gestures for brain stimulation. 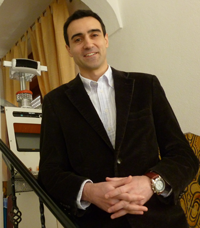 Antonio is an IEEE member and robotics researcher. He is also a member of the IEEE Robotics and Automation Society.