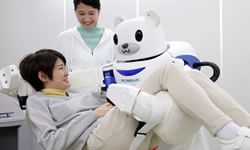 Daniel Hurst for The Guardian: Japanese government wants to increase acceptance of technology that could help fill the gap in the nursing workforce

Robot companions are just what the doctor ordered 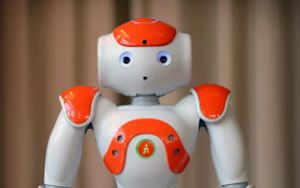 Abrar Al-Heeti for CNet: "We've done tests before with a screen or even the robot on a screen, and nobody cared," Deblieck said. "But from the moment the Zora solution came in, you saw people starting to move."

Barb Darrow for Fortune: A Canadian-American robotics company is turning to the popular Amazon Alexa-Echo combo to help people with spinal or lower-body injuries be more mobile and autonomous in their homes.

How robotics and automation are helping to deliver resources and healthcare, medication, treatments, assisted living care to the elderly population-how robotics can monitor senior patients and communicate with clinicians etc.

03/08/17, 05:38 AM | Mobile & Service Robots | Health Robotics
In a new PPP collaboration between University Hospital Køge and Blue Ocean Robotics an innovative patient-lifting robot is developed to perform gentle and effortless transfers of patients without the use of fixed overhead lifts.

The cognitive computing tech we developed enables ElliQ to not only react to commands but also proactively suggest activities for the older adults, such as going for a walk based on the weather, reading the news, finding new music, or video-chatting with a friend. 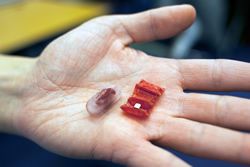 MIT News via Larry Hardesty for RoboHub:  In experiments involving a simulation of the human esophagus and stomach, researchers at MIT, the University of Sheffield, and the Tokyo Institute of Technology have demonstrated a tiny origami robot that can unfold itself from a swallowed capsule and, steered by external magnetic fields, crawl across the stomach wall to remove a swallowed button battery or patch a wound. The new work, which the researchers are presenting this week at the International Conference on Robotics and Automation, builds on a long sequence of papers on origamirobots from the research group of Daniela Rus, the Andrew and Erna Viterbi Professor in MIT’s Department of Electrical Engineering and Computer Science.   Cont'd...

Controlled via a tablet by health professionals, Zora can lead a physical therapy class, read out TV programmes, weather forecasts or local news.

The issue of nursing care in an ageing society is a major social concern and will continue to be so. Therefore, we can expect to see robotic devices become the caregivers of the future.

A Vision for the Future: Baxter Shines in Research to Guide the Blind

07/24/15, 08:10 AM | Industrial Robotics, Unmanned & Other Topics | Health Robotics
Company Initiates U.S. Launch of the Flex Robotic System for Transoral Procedures in the Mouth and Throat

07/24/15, 08:09 AM | Industrial Robotics, Unmanned & Other Topics | Health Robotics
"To deliver the best patient care with passion and empathy"