Hundreds of small robots can work in a team to create biology-inspired shapes – without an underlying master plan, purely based on local communication and movement. 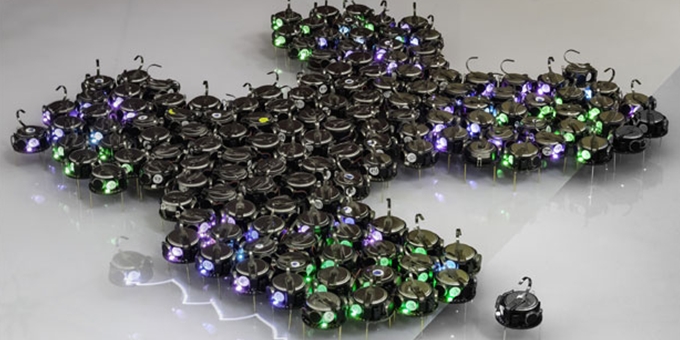 Hundreds of small robots can work in a team to create biology-inspired shapes – without an underlying master plan, purely based on local communication and movement. To achieve this, researchers from EMBL, CRG and Bristol Robotics Laboratory introduced the biological principles of self-organisation to swarm robotics. Science Robotics publishes the results on 19 December.

“We show that it is possible to apply nature’s concepts of self-organisation to human technology like robots,” says EMBL Barcelona group leader James Sharpe. “That’s fascinating because technology is very brittle compared to the robustness we see in biology. If one component of a car engine breaks down, it usually results in a non-functional car. By contrast when one element in a biological system fails, for example if a cell dies unexpectedly, it does not compromise the whole system, and will usually be replaced by another cell later. If we could achieve the same self-organisation and self-repair in technology, we can enable it to become much more useful than it is now.” Sharpe led the project – initiated at the Centre for Genomic Regulation (CRG) – together with Sabine Hauert at the University of Bristol.

Shape formation as seen in the robot swarms. Complete experiments lasted for three and a half hours on average. Inspired by biology, robots store morphogens: virtual molecules that carry the patterning information. The colours signal the individual robots’ morphogen concentration: green indicates very high morphogen values, blue and purple indicate lower values, and no colour indicates virtual absence of the morphogen in the robot. Each robot’s morphogen concentration is broadcasted to neighbouring robots within a 10 centimetre range. The overall pattern of spots that emerges drives the relocation of robots to grow protrusions that reach out from the swarm. See a longer video: https://youtu.be/bEm-fXkLw7g.

The only information that the team installed in the coin-sized robots were basic rules on how to interact with neighbours. In fact, they specifically programmed the robots in the swarm to act similarly to cells in a tissue. Those ’genetic’ rules mimic the system responsible for the Turing patterns we see in nature, like the arrangement of fingers on a hand or the spots on a leopard. In this way, the project brings together two of Alan Turing’s fascinations: computer science and pattern formation in biology.

The robots rely on infrared messaging to communicate with neighbours within a 10 centimetre range. This makes the robots similar to biological cells, as they too can only directly communicate with other cells physically close to them.

The swarm forms various shapes by relocating robots from areas with low morphogen concentration to areas with high morphogen concentration – called ‘turing spots’, which leads to the growth of protrusions reaching out from the swarm. “It’s beautiful to watch the swarm grow into shapes, it looks quite organic. What’s fascinating is there is no master plan, these shapes emerge as a result of simple interactions between the robots. This is different from previous work where the shapes were often predefined.” says Sabine Hauert.

It is impossible to study swarm behaviour with just a couple of robots. That is why the team used at least three hundred in most experiments. Working with hundreds of tiny robots is a challenge in itself. They were able to do this thanks to a special setup which makes it easy to start and stop experiments, and reprogram all the robots at once using light. Over 20 experiments with large swarms were done, with each experiment taking around three and a half hours.

Furthermore, just like in biology, things often go wrong. Robots get stuck, or trail away from the swarm in the wrong direction. “That’s the kind of stuff that doesn’t happen in simulations, but only when you do experiments in real life”, says Ivica Slavkov, who shares first authorship of the paper with Daniel Carrillo-Zapata.

All these details made the project challenging. The early part of the project was done in computer simulations, and it took the team about three years before the real robot swarm made its first shape. But the robots’ limitations also forced the team to devise clever, robust mechanisms to orchestrate the swarm patterning. By taking inspiration from shape formation in biology, the team was able to show that their robot shapes could adapt to damage, and self-repair. The large-scale shape formation of the swarm is far more reliable than each of the little robots, the whole is greater than the sum of the parts.

While inspiration was taken from nature to grow the swarm shapes, the goal is ultimately to make large robot swarms for real-world applications. Imagine hundreds or thousands of tiny robots growing shapes to explore a disaster environment after an earthquake or fire, or sculpting themselves into a dynamic 3D structure such as a temporary bridge that could automatically adjust its size and shape to fit any building or terrain. “Because we took inspiration from biological shape formation, which is known to be self-organised and robust to failure, such swarm could still keep working even some robots were damaged.“ says Daniel Carrillo-Zapata. There is still a long way to go however, before we see such swarms outside the laboratory.

About James Sharpe
James Sharpe (EMBL Barcelona) led the Swarm-Organ project, which was initiated at the Centre for Genomic Regulation (CRG) when Sharpe was a group leader there. Sabine Hauert (Bristol Robotics Laboratory and University of Bristol) was the key senior collaborator. Other collaborators were Fredrik Jansson (currently employed at Centrum Wiskunde & Informatica – CWI) and Jaap Kaandorp (University of Amsterdam – UvA).

The research leading to these results has received funding from the European Union Seventh Framework Programme (FP7) under grant agreement n° 601062, and the EPSRC Centre for Doctoral Training in Future Autonomous and Robotic Systems (FARSCOPE) at the Bristol Robotics Laboratory.