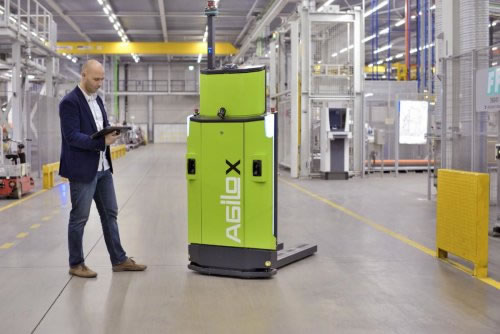 Swarm Intelligence (SI) and bio-inspired computing have attracted great interest in almost every area of science and engineering, including robotics, over the last two decades.

Hundreds of small robots can work in a team to create biology-inspired shapes - without an underlying master plan, purely based on local communication and movement.

An Oregon State University computer science professor is part of a team that will receive up to $7.1 million to develop a drone swarm infrastructure to help the U.S. military in urban combat.

01/26/17, 02:56 PM | Mobile Robots, Other Topics | research, swarm
UCSD:  Underwater robots developed by researchers at Scripps Institution of Oceanography at the University of California San Diego offer scientists an extraordinary new tool to study ocean currents and the tiny creatures they transport. Swarms of these underwater robots helped answer some basic questions about the most abundant life forms in the ocean—plankton. Scripps research oceanographer Jules Jaffe designed and built the miniature autonomous underwater explorers, or M-AUEs, to study small-scale environmental processes taking place in the ocean. The ocean-probing instruments are equipped with temperature and other sensors to measure the surrounding ocean conditions while the robots “swim” up and down to maintain a constant depth by adjusting their buoyancy. The M-AUEs could potentially be deployed in swarms of hundreds to thousands to capture a three-dimensional view of the interactions between ocean currents and marine life.   Cont'd...

3 Micro Drones & Robot Swarms Initiatives Backed by the US Military

DARPAs FLA program aims to create unmanned nano robot like insects & birds that can go into buildings & perform key activities that will not be possible by Humans.