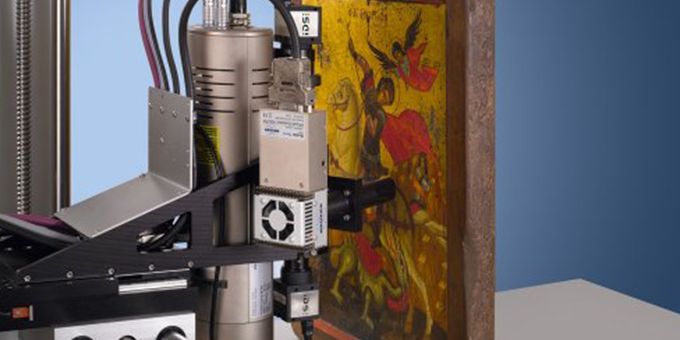 The "Virgin of the Rocks" is a famous artwork by Leonardo da Vinci. The painting exists in two versions. One of them is displayed in the National Gallery in London. It owes its current radiance to an elaborate restoration in which the latest examination methods including image processing technology were used. An M6 JETSTREAM spatially resolving micro X-ray fluorescence spectrometer from Bruker Nano GmbH Berlin played a decisive role in this. It enabled investigations of the smallest paint particles and delved into the depth of the paint layers. Two USB cameras from IDS Imaging Development Systems GmbH provided the necessary optical information of the sample surface and ensured the exact positioning of the spectrometer over the measuring area.

The "Virgin of the Rocks" is a famous work by Leonardo da Vinci and shows the Virgin Mary with the Christ Child, the boy St. John and the angel Uriel in a rock cave. The painting is one of three panels, all from an elaborate and partially sculpted altarpiece made for the Church of San Francesco Grande in Milan. One of actually two versions is displayed in the National Gallery in London. The painting owes its current radiance to an elaborate restoration in which the latest examination methods including image processing technology were used. An M6 JETSTREAM spatially resolving micro X-ray fluorescence spectrometer from Bruker Nano GmbH Berlin played a decisive role in this. It enabled investigations of the smallest paint particles and delved into the depth of the paint layers. Two USB cameras from IDS Imaging Development Systems GmbH provided the necessary optical information of the sample surface and ensured the exact positioning of the spectrometer over the measuring area.

Even great masterpieces can suffer from ageing. Colour changes such as yellowing or small amounts of damage cloud the brilliance of the colours and must be repaired from time to time. Extreme caution is required with a picture like the "Virgin of the Rocks". The restorer must study painting techniques and know exactly the chemical composition pf the colours that were used in order not to destroy the uniqueness of the painting. After several years of research into the feasibility and safety of a possible conservation treatment, da Vinci's London "Virgin of the Rocks" was finally cleaned and restored. The treatment was carried out primarily for aesthetic reasons, since the picture had become increasingly darker and less "recognizable" due to the strong degradation of an oil and mastic varnish applied in 1949.

The analytical examinations of the painting were carried out not only before starting the treatment, but also during the cleaning. This allowed valuable information to be gathered on the condition of the surface layers as well as the layer structure and the materials used.  The examination of the elemental composition simultaneously provides information about the authenticity of the colours.

For example, great artists may have bought some paints "on the open market", but mixed the typical colours themselves. Thus the colours used can give an indication of the authenticity of a painting. If, on the other hand, the painter is not known exactly or if several contemporary artists worked on the same painting, the type of brushstrokes and the choice of colours can reveal which part of the picture belongs to whom. Thus the second version of the "Virgin of the Rocks" was probably begun by Leonardo da Vinci and continued by his pupil Ambrogio de Predis. The knowledge about Leonardo da Vinci's painting practice could be greatly expanded and also documented through the analyses.

State-of-the-art image processing supports today's restorers in this work. In the case of da Vinci's work, the M6 JETSTREAM spectrometer from Bruker Nano GmbH was used. Equipped with IDS cameras, the system reveals the composition of colours in a non-invasive and non-destructive way. It performs X-ray fluorescence measurements on single points (100 micrometres and smaller) of large areas. This precise X-ray fluorescence spectroscopy (micro-XRF) makes it possible to determine the elemental composition of a sample, i.e. to register exactly which elements (heavy metals, blood pigment, carbon, etc.) are present in the colours. The measuring points can be recorded 'on the fly', i.e. while the measuring head is moving. This enables a fast surface analysis known as mapping. 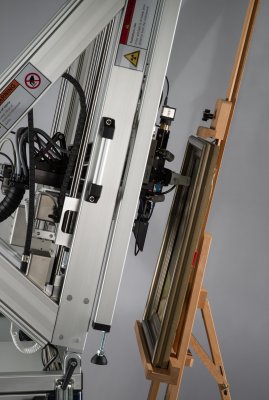 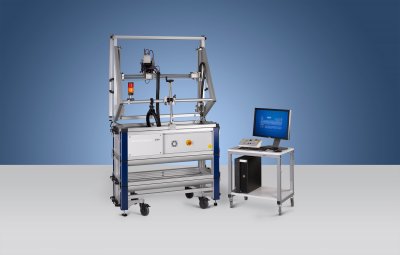 "The M6 JETSTREAM X-ray fluorescence spectrometer provides us with a large amount of elemental information that allows us to draw conclusions about the pigments and their position in the paint layer structure," explains Michele Gironda, Market Segment Manager Art & Conservation at Bruker Nano GmbH. "It can, for example, also reveal later changes and additions to the picture and, if necessary, show differences in pigment consumption and layer structure between different artists". 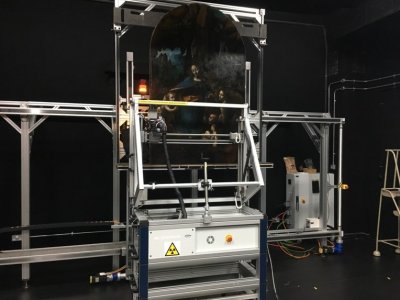 The painting is scanned point by point and line by line with a focused X-ray beam. The elements assigned to the pigments in each area each emit their own characteristic X-ray fluorescence radiation, which is registered by the detectors in the spectrometer. In this way, chemical information about the entire painting is collected in a series of contrasting images. If, for example, copper (Cu) was discovered in the white of a painting, this indicates the use of azurite, a copper-based blue in the white colour. Based on the elements detected, most pigments can be identified with this technology. In addition, the analysis can provide information about the history of an object and reveal some of its secrets. Again and again, works hidden behind the paint on the surface can be found in the background and often a lost work of art unexpectedly comes to light - painted over, perhaps, because the artist did not like it or simply needed the canvas. 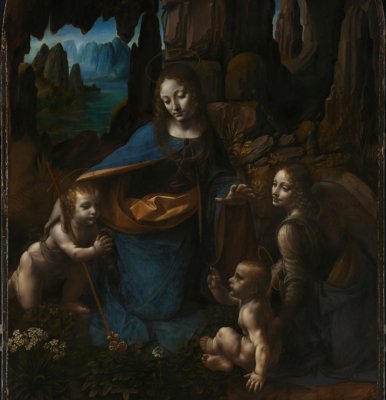 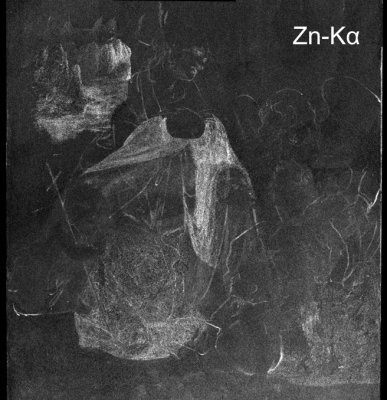 The zinc map on the right shows a zinc-containing under-drawing of a first, abandoned composition

The most important new information from the X-ray fluorescence analysis of the "Virgin of the Rocks" was the discovery of a zinc-containing under-drawing in the first image composition. The existence of this drawing was known in advance, but could be made much more clearly visible by X-ray fluorescence analysis - especially in combination with hyperspectral imaging. Particularly interesting changes can be seen, for example, in the drapery of the Virgin's robe (painted with an underlayer of copper-containing azurite) and in the position of the face of the Christ Child. The original three-quarter view was changed to the now painted profile (seen in the Pb-Lα map).

The Cu-Kα, Pb-Lα and Pb-Mα maps show some of the changes in the drapery of the Virgin's cloak and the position of the Christ Child's face

Bruker Nano GmbH integrates IDS cameras into its M4 TORNADO/TORNADOPLUS and M6 JETSTREAM X-ray fluorescence spectrometers. The M4 TORNADO spectrometer is the market leader in the field of surface analysis using micro-XRF. It offers a spot size of 20 µm and the possibility to analyse all elements in the periodic table from carbon (optional) to uranium. It is used, among other things, for the examination of mineral samples and for layer thickness analysis. With its measuring range of 800 mm x 600 mm and its variable installation options, the M6 JETSTREAM mobile spectrometer is ideal for examining larger artworks.

In each of them, two USB 2 uEye SE industrial cameras with a resolution of 1024 x 768 pixels are used to display the sample surface in the Bruker software. Prior to the X-ray fluorescence measurement, a camera is used to generate an image of the sample surface in order to subsequently combine the element composition and the optical information. An overlapping image is created from the camera image and elemental distribution. "The video image can be superimposed on the elemental distribution image to make connections optically visible. The speed, size and interface of the USB 2 uEye SE cameras were a perfect match," explains Michele Gironda.

The cameras are also used in live image mode to approach the desired measuring points or areas on the sample and to adjust the working distance by focusing the camera image. The measuring head of the M6 JETSTREAM spectrometer contains a micro focus X-ray tube and capillary optics with stepwise adjustable spot sizes. Measuring speeds of up to 100 mm/s are possible. The fluorescence spectrum is measured with silicon drift detectors (SDD). 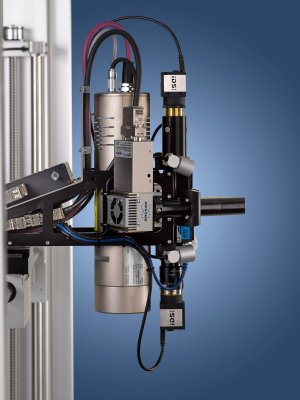 Small, compact and robust - these are the main features of the IDS uEye SE product family. The versatile camera is also characterized by a large selection of housing and board-level models and a broad sensor portfolio. System integration is simple and fast, thanks to plug & play through the IDS Software Suite. The range of applications in the industrial and non-industrial sector is thus diverse. Besides the USB 2.0 version used by Bruker Nano GmbH, models with USB 3.1 Gen 1 or GigE interface - also with GigE Vision® interface - are available.

By cleaning and removing the distorting varnish, the "Virgin of the Rocks" can once again reveal its full power, beauty and magical impact - also thanks to the M6 JETSTREAM micro X-ray fluorescence spectrometer from Bruker Nano GmbH. These are unique on the art market. With the help of image processing, they open up completely new perspectives for the analysis of paintings and other works of art. Bruker therefore expects continued good growth of the micro-XRF market and an increasing demand for even higher resolution images and element distributions. Whether in terms of colour composition, painting technique, authenticity or historical background, whether in a museum in front of an audience or in a laboratory - with this application, art historians, restorers and researchers can discover undreamt-of secrets of old masterpieces.

Client
Bruker Nano GmbH is a member of the Bruker Group, a worldwide leading supplier of analytical instruments and solutions in the fields of life and material sciences and industrial process control.
Bruker Nano GmbH develops, produces and distributes X-ray analysis systems and components for element and structure analysis in the micro and nano range, especially energy dispersive X-ray spectrometers for electron microscopes as well as mobile X-ray fluorescence spectrometers for spatially resolved and trace element analysis.

The goal: fully automated small parts picking. The main driver here is the labor shortage, the big challenge not a technical component like the robot or the gripper, but the design of an overall economic process.