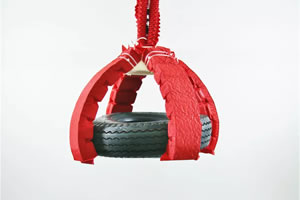 James Vincent for The Verge:  Soft robotics has been a promising field of research for years, but these squidgy and flexible creations have been held back by the absence of one important characteristic: strength. Now, scientists from MIT CSAIL and Harvard’s Wyss Institute have come up with a way to give soft robots some power — by outfitting them with rigid origami skeletons.

In a paper published today in the journal PNAS, researchers describe a new type of soft artificial muscle that could be used to build soft robots. Each muscle consists of a sealed bag filled with air or fluid, containing a folding origami structure that functions as the skeleton. When the pressure inside the bag is reduced using an electric pump, the whole structure collapses and contracts, just like the muscles in your arm or leg. It may not sound like a recipe for strength, but these artificial muscles are much stronger than their human counterparts, capable of lifting 1,000 times their own weight.

“Soft robots have so much potential, but up until now, one of the limitations has been payloads,” Professor Daniela Rus, CSAIL director and lead author of the paper, tells The Verge. “[They’re] very safe, very gentle, but not good for lifting heavy objects. This new approach allows us to make strong and soft robots.”  Full Article: