The Hydroponic, Robotic Future of Farming in Greenhouses

Matt Simon for Wired: The company is developing machine learning algorithms that will automatically detect diseased plants and kick them out of the system before the sickness spreads. Underdeveloped plants would also get the boot.

Geoffrey Mohan for LA Times: Now, the $47-billion agriculture industry is trying to bring technological innovation up to warp speed before it runs out of low-wage immigrant workers. 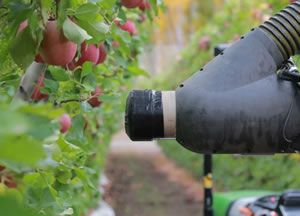 B©r©nice Magistretti for VentureBeat: Picking apples may seem like a fun weekend activity, but its actually backbreaking manual labor. Abundant Robotics wants to help agricultural growers shoulder this task and today announced funding of $10 million, led by GV, to commercialize its apple-picking robot.

Program and simulate ALL your robots with OCTOPUZ offline software. OCTOPUZ specializes in path sensitive robotic applications such as welding, fabrication, edge following (waterjet, deburring, laser cutting), material removal (2D & 3D machining), and pick & place. Easy to learn, it directly supports paths from your favorite CAM system, has a library of over 15 different types of robot brands, can cut path generation by over 50% and is fully customizable to your unique needs. Program and simulate multiple robots simultaneously in any configuration! Responsive technical assistance from OCTOPUZ before, during and after sale via training, support and cell development make OCTOPUZ the software of choice.
More Industrial Automation, Robots and Unmanned Vehicles Products | Feature Your Product