The annual STEM-focused week kicks off April 6, 2019 with more than 300 events across all 50 states 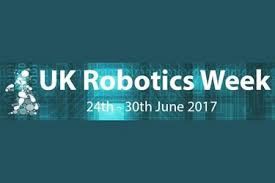 The UK's world-leading robotics research will be showcased at the second UK Robotics Week, which begins on Saturday, 24 June, 2017 and runs until Friday, 30 June. 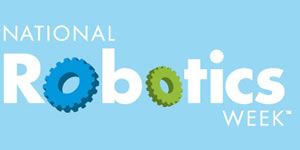 The eighth annual National Robotics Week event will be held April 8-16, 2017. RoboWeek 2016 was awesome and 2017 promises to be even better! Activities can be small, large, and everything in between.

Greg Nichols for ZDNet:  The seventh annual National Robotics Week, which kicks off this week, will see more than 250 events take place across all 50 states. It's a pretty cool time to celebrate robots. A new generation of small, relatively inexpensive, and highly collaborative industrial robots brought new levels of automation to light industry last year. Home robots, in the form of vacuums and lawn mowers, continue to do well in sales, and drones--technically flying robots--are everywhere. I'm literally watching one fly over a park near my house as I write. New kinds of bots are also making early strides. Companies like Savioke are bringing robots to hotels and others likeRevolve Robotics and Double are connecting people via affordable embodied telepresence--especially people whose disabilities prevent them from traveling to school or work.   Cont'd...

04/01/16, 05:11 AM | Industrial Robotics, Mobile & Service Robots | national robotics week
The seventh annual National Robotics Week kicks off April 2 with a record number of events - more than 250 - taking place across all 50 states. Established in 2010 by Congress and iRobot, National Robotics Week raises awareness around the importance of education focused on Science, Technology, Engineering, and Math (STEM), and the role these subjects play in shaping the future of our society's youth, industry and the U.S. economy.

National Robotics Week Looks to Host More Events, Robot Enthusiasts and STEM Educators than Ever Before