By Conner Forrest for TechRepublic:  In Dongguan City, located in the central Guangdong province of China, a technology company has set up a factory run almost exclusively by robots, and the results are fascinating. The Changying Precision Technology Company factory in Dongguan has automated production lines that use robotic arms to produce parts for cell phones. The factory also has automated machining equipment, autonomous transport trucks, and other automated equipment in the warehouse. There are still people working at the factory, though. Three workers check and monitor each production line and there are other employees who monitor a computer control system. Previously, there were 650 employees at the factory. With the new robots, there's now only 60. Luo Weiqiang, general manager of the company, told the People's Daily that the number of employees could drop to 20 in the future. The robots have produced almost three times as many pieces as were produced before. According to the People's Daily, production per person has increased from 8,000 pieces to 21,000 pieces. That's a 162.5% increase.   Cont'd...

Ethernet Slip Ring Can Meet Your Needs In Factory Automation

By John Schmid of the Journal Sentinel:  The Texas facility that mass-produces State Fair corn dogs and Jimmy Dean Pancakes & Sausage on a Stick retooled itself recently as a hyper-automated smart factory. It installed 1,500 sensors to collect gigabytes of data on everything from raw meat inventories to wastewater and electrical usage. Then the Fort Worth factory took one extra step into the future of industrial technology: It added software that transmits all of that real-time data onto smartphones and tablets, making it possible for plant managers to monitor their production network from anywhere on the factory floor — and during coffee breaks or vacations, as well. If they choose — so far, most don't — this new breed of mobile managers can even operate factory equipment remotely, shutting off pumps or speeding up production lines. Technology has made that sort of operation as easy as playing a smartphone video game, but it can be reckless because a lot of equipment can interfere with or hurt those who are physically present. It's only a matter of time, some say, before factory controls migrate to Google Glass, the wearable displays mounted in eyeglass frames, or smart wristwatches. Cont'd... 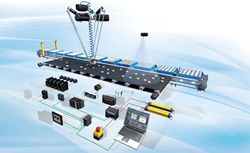 Dan Dibbern and Laura Studwell for Quality Magazine:  Industrial robots are expected to be the focus for investment in factory automation. According to the International Federation of Robotics (IFR), investment in industrial robots is expected to grow at an annual rate of 12% from 2015 to 2017. The packaging industry is experiencing a surge in robotic integration throughout primary, secondary and tertiary packaging—from processing, assembly, labeling and cartoning to case packing and palletizing. The driving force behind the surge in robotics sales growth in North America is the Food Safety Modernization Act (FSMA). The FSMA is requiring companies to introduce automated machinery and components into the production process to help eliminate potential product quality and integrity issues. With the FSMA about to publicly release its requirements, the use of robots in packaging is at the point of takeoff. And with recent technical advances in robotics helping to power the new wave of interest, companies are experiencing first-hand that robots are faster, smarter and more affordable than ever before.