07/04/15, 06:06 AM | Mobile & Service Robots , Unmanned & Other Topics | Additive Manufacturing
Oak Ridge National Laboratory (ORNL), a world leader in the research and development of advanced materials and economical green energy solutions, has awarded Beckwood Press Company a contract to manufacture a custom hydraulic press for the compression molding of various composite materials. The research and development efforts made on the press will ultimately contribute to automotive and aerospace industry lightweighting efforts, intended to produce higher performance products with improved fuel efficiency.

Could This Machine Push 3-D Printing into the Manufacturing Big Leagues? 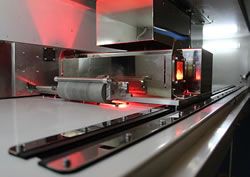 Neil Hopkinson, a professor of mechanical engineering at the University of Sheffield in the United Kingdom, has been developing the new method, called high-speed sintering, for over a decade.  Laser sintering machines build objects by using a single-point laser to melt and fuse thin layers of powdered polymer, one by one. Hopkinson replaced the laser system, which is both expensive and slow, with an infrared lamp and an ink-jet print head. The print head rapidly and precisely delivers patterns of radiation-absorbing material to the powder bed. Subsequently exposing the powder to infrared light melts and fuses the powder into patterns, and the machine creates thin layers, one by one—similar to the way laser sintering works, but much faster. Hopkinson’s group has already shown that the method works at a relatively small scale. They’ve also calculated that, given a large enough building area, high-speed sintering is “on the order of 100 times faster” than laser sintering certain kinds of parts, and that it can be cost competitive with injection molding for making millions of small, complex parts at a time, says Hopkinson. Now the group will actually build the machine, using funding from the British government and a few industrial partners.  Cont'd...

Diffractive Optical Elements Made of Plastic

05/06/15, 10:11 AM | Mobile & Service Robots , Unmanned & Other Topics | Additive Manufacturing | Stratasys
Leading companies in a variety of industries, from aerospace and automotive to consumer goods and medical, are partnering with Stratasys to adopt additive manufacturing strategies.

MMP is a Leader in Rapid Prototyping of High-Quality Motion Control Solutions. MMP offers wide variety of standard Brushed and Brushless DC Motors with Planetary Gearheads to complete engineering designs. We provide 8,000+ Released Gearmotor designs and are continually committed to deliver rapid prototyping services to help design and engineer ideas into reality. If you need a sample right away, we can be a project saving convenience for you. We carry a wide variety of finished goods, directly from stock and available for your immediate prototype needs.
More Industrial Automation, Robots and Unmanned Vehicles Products | Feature Your Product